So this is the new politics. On 22 June chancellor George Osborne’s budget unveiled the government’s intention to cut public spending harder and faster than any time since the second world war.

Despite prime minister David Cameron’s claims that the budget would somehow “protect the poor”, and Osborne’s now infamous remark that “we’re all in this together”, the Institute for Fiscal Studies revealed that the measures will hit the least well-off 10 per cent of the population five times harder than the richest over the next five years.

We shouldn’t be surprised, of course, for we have been here at the hands of Tory governments before, at the hands of coalition governments too. Far from kick-starting “a new politics”, the ConDem coalition has embarked on a depressingly familiar course under the depressingly familiar cry, issued most recently by Osborne, that such measures are “unavoidable” and “fair”.

In a cogent commentary on the budget, Guardian columnist Seumas Milne referred to “an iconic Labour movement cartoon from the early 1930s, when when another coalition came to power in the wake of a financial crisis and slump”.

The cartoon, titled ‘Equality of Sacrifice?’ (see below), shows four class steretypes on a ladder with a cloth-capped labourer at the bottom up to his neck in water. “Equality of sacrifice – that’s the big idea, friends!” says the silk-hatted figure at the top. “Let’s all step down one rung.” 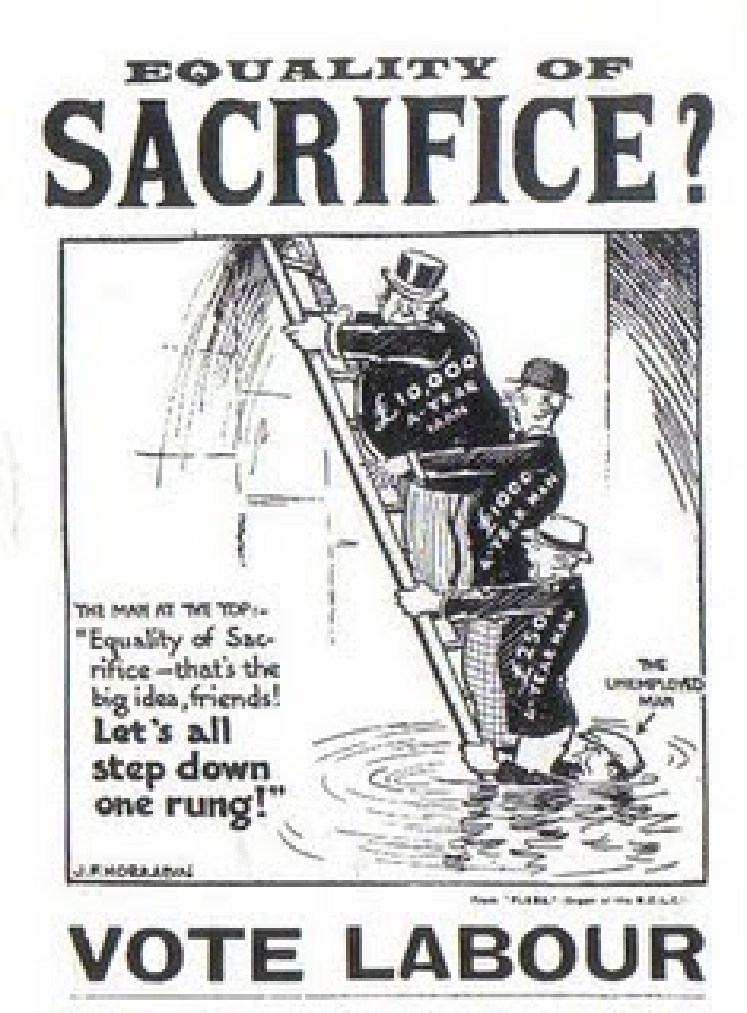 Milne writes: “As the depression-era cartoonist highlighted, the idea that there can be any equivalence in belt-tightening for rich and poor is a nonsense. Even if the different income groups were paying proportionate shares, or the wealthy were actually shouldering a heavier burden, as Osborne claimed, the impact would obviously be far greater for those struggling on benefits than for beneficiaries of the boardroom bonanza.

“… the bare-faced deceit at the heart of the government’s claims has become brutally evident. Far from being a fair shares package that shelters the vulnerable, it’s now clear that the net effect of [the] announcements will be to hammer the poorest the hardest.”

That pre-war cartoonist was JF Horrabin and his image was first used on a poster by the Labour Party during the 1929 general election and, later, by PLEBS, an organisation connected to the National Labour College.

As for the Lib Dem leaders’ hand-wringing claims to have won concessions from the Tories, Milne hits that proverbial nail on its flattened head too, when he says: “In reality, an inexperienced Lib-Dem leadership has been taken to the cleaners.”

There’s nothing new in the Liberal and Tory parties combining to squeeze the poor, as an even earllier Labour movement cartoon makes all too clear. The ‘Political Washerwomen’ image (below) was first printed in an 1895 edition of the Labour Leader, organ of the early Independent Labour Party, and reproduced 90 years later in an ILP calendar, published at the height of Thatcherism. 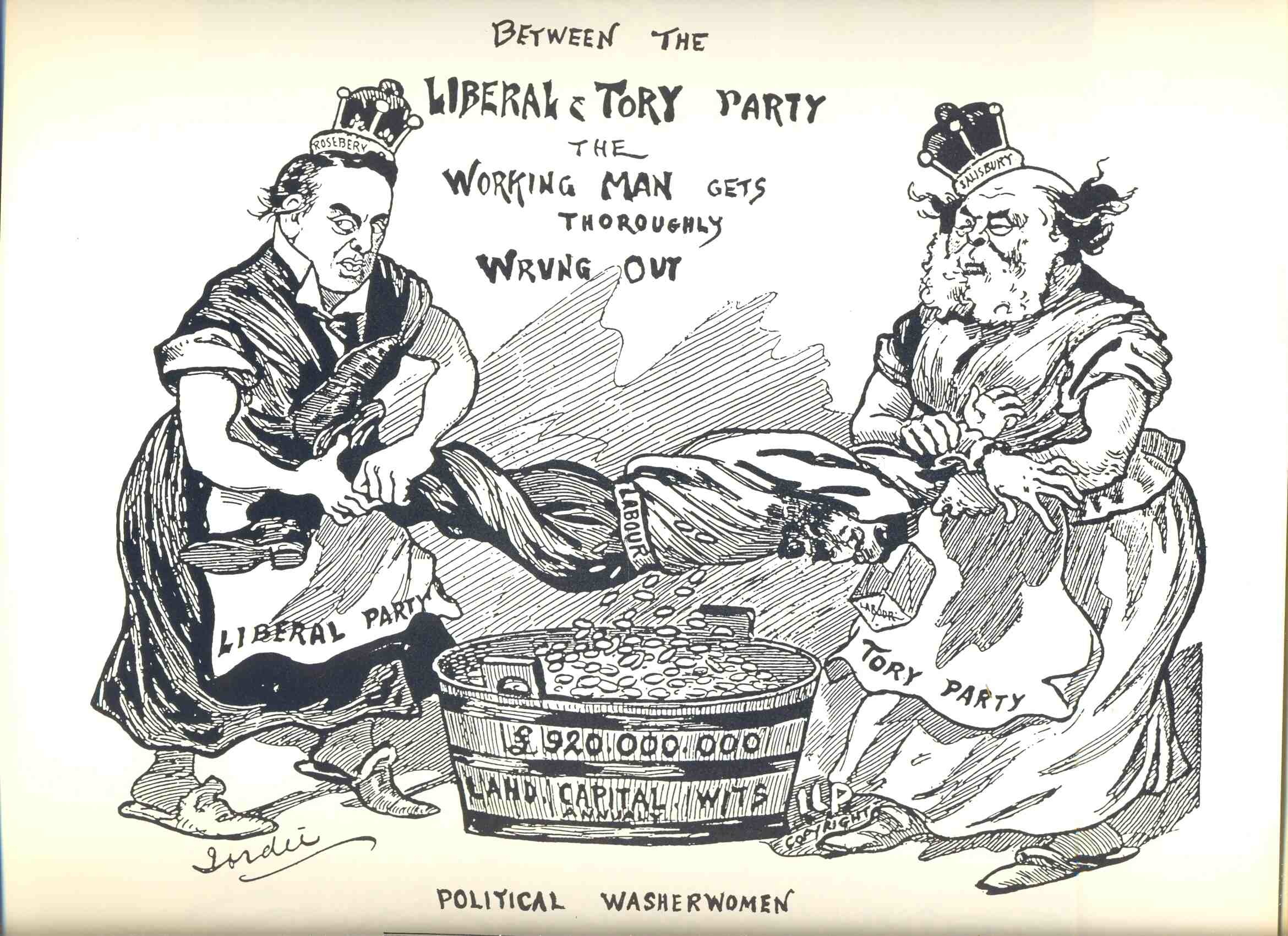 Knowing there’s nothing new in the current government’s attack on the poor doesn’t mean we shouldn’t learn from history, however. The Labour movement can’t just sit back and wait for the Liberal-Conners to collapse, as Milne suggests it might, and the country to swing to the left. It took more than two decades and a lot of hard political campaigning from the birth of the ILP in 1893 to the formation of the first Labour government, and despite the depression of the 1930s it wasn’t until after the second world war in 1945 that Labour came back to power.

These old cartoons are a useful reminder that, in some ways at least, not much has changed, that many of the challenges that have faced the left down the years, still remain.

But much has changed too. The government’s social and economic attack on the poor and public sector is accompanied by an ideological onslaught built on three decades of cultural shift towards a consumerist and individualist society. After 18 years of Thatcherism, and new Labour’s timid response, persuading people that a small state isn’t the answer to a crisis will be hard work.

We’re in for some tough times under this Tory-Torylite administration. Yet, however bad the economy gets, winning the political battle will take more than wishful thinking.

The Equality of Sacrifice cartoon has become a popular image with political bloggers in recent months, see: