Soundings’ ebook, Britain’s Broken Economy – and how to fix it, is an essential read for anyone interested in a left alternative to UK capitalism, says BEN TURLEY.

For political reasons, Britain’s Broken Economy does not touch on the structural 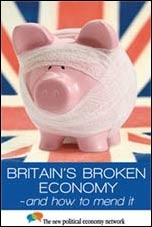 deficit or engage with arguments about the sustainability of public expenditure. This is because the ebook wants to focus on underlying structural problems, which are not high spending schools and hospitals, but badly performing banks and pensions, declining economic activity and poor wages and housing.

Refreshingly, it does not claim to have all the answers, recognizing the depth of capitalism’s failure in the UK over the last 30 years and the extremely difficult position that that failure places us in. After reading it will you will understand why the far left’s rhetoric betrays a weak grasp of reality and how far the Labour Party’s new leadership has to travel before Labour is fit for government.

The authors recognise that the ideology of neo-liberalism not only survived the financial crisis of 2008/9 but remains the dominant economic and social paradigm of our times. Socialist and social democratic ideas and movements proved to be too weak to exploit the ‘opportunity’ that the failure of financial markets presented.

In particular, the Labour Party – which made a virtue of free market approaches under Blair and Brown – desperately needs to develop a different ‘political economy’. After 13 years of governing, largely during boom years, Labour ended up letting down low and middle income voters who had to borrow to maintain living standards. To win them back, it has to re-think its ‘narrative’ (although, if it holds true to form in the long term, it may do so by choosing the most right wing reformist option available).

Above and beyond this, ‘the economy must be rebuilt and rebalanced away from the financial sector’. This is an extraordinarily difficult task, not, primarily, because of government borrowing but because we must meet a triple challenge: the growth of China (no mention of India or South America); the limits on growth from global warming and resource depletion; and the likely continuation of the crisis in the financial sector, which still rests on an unstable mountain of debt.

The picture painted of the UK economy is truly depressing and belies the optimistic proposals made in the ebook later on. It’s hard to believe that we can get out of this mess easily. Here are some of the facts it presents:

This last fact suggests there’s a glimmer of hope, at least it does to the authors. Taking their inspiration in part, from the economic policies of the Independent Labour Party of the 1920s, they recognise that economic growth can be stimulated by more equal income distribution in favour of low and middle income earners (who must by necessity spend a greater proportion of their income on goods rather than assets).

Trying to avoid the failed socio-democratic policies of the 1960s and ’70s, it states that a new political economy of the left must not only focus on consumption, but on investment too (although, didn’t Labour governments in the ’60s attempt to plan investments, with little success?).

It suggests creating a publicly-held ‘sovereign wealth fund’ (through some ingenious tax changes) and buying up existing companies to transform them into social enterprises; establishing democratic control of credit to allow renewable energy and green start-ups to flourish (this is assuming low and middle income voters want to consume these products rather than, say, enjoy more meals out and foreign holidays); providing tax relief on investments in new capital assets; separating investment from retail banking and creating greater tax transparency (which may sound dull but is, in fact, a prerequisite for democratic government both here and internationally).

Some of these proposals seem sensible; others seem half-baked. The Green New Deal must rank as one of the most over-used policy ideas of our time! When all is said and done, it’s only about home insultation, is time-limited and, in employment terms, mainly benefits plumbers (although I don’t begrudge Keynesian measures to keep their businesses afloat). The most convincing proposal – one likely to generate high demand over a long time and create high levels of employment – is to build affordable housing, made available through various forms of ownership and control not just a mass council house-building programme.

The ebook contains another point which offers substantial hope – namely, that 28 per cent of those in employment work in the public sector or the ‘para’ public sector, providing public services. This part of the economy stimulates and helps to sustain a significant slice of the private sector too. By operating ethical procurement policies, and importing equality and human rights considerations into contracts with the private sector, the public sector can influence businesses in the UK to work in a more humane and sensible way while the economy grows. That way everybody benefits. It’s an encouraging thought, even though the coalition government is intent on changing this virtuous mix.

Overall, the authors seem to have more innovative and worked-through suggestions about the institutional structure of the new political economy than ideas about what economic activities we should be engaging in. But there are some interesting tax proposals.

Let’s hope this ebook creates a debate that develops in two parallel ways: first, that the political case for a left economic alternative is clearly articulated, based on ‘democracy [as the] prerequisite for a moral economy’; and secondly, that a greater number of credible economic policy initiatives are generated which reflect this principle.

Britain’s broken economy – and how to mend it is written by members of the New Politicial Economy Network and published by Soundings. It can be downloaded from:
www.lwbooks.co.uk/ebooks/BritainsBrokenEconomy.html