“Love learning which is the food of the mind.”
Extract from The Socialist Ten Commandments

Socialism did not begin with the ILP. But the ILP created a unique blend of socialism. Not only did it achieve independent representation for labour and links with the trade unions, it also worked outside the formal political structures.

Many ILPers saw their main job as converting people to socialism. To do this, they tried to set an example by leading socialist lives. They encouraged a sense of comradeship, commitment and fun. They invited people to participate in a living community with a choice of activities, cultural as well as political.

Inspired by Robert Blatchford’s popular Clarion newspaper, socialism was preached from touring Clarion vans. Cyclists, who joined Clarion clubs to enjoy the countryside, would ride ahead to give advance notice of the arrival of the vans. 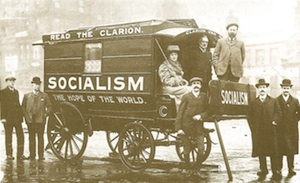 Labour churches, first formed in Manchester, offered an alternative to orthodox religious beliefs. They sought: “The realisation of Heaven in this life by the establishment of a society founded on justice and love to thy neighbour.” From this came the Socialist Sunday School movement for children which called for equality and respect for all.

This ethical, communal and campaigning approach made the ILP’s politics distinctive. ILPers were intent on creating the whole world anew and they had the confidence and enthusiasm to believe that it could be done. Often their moral vision, that desire to inspire and uplift people, was clearer that their political vision. The connection between politics and morality was not explored. Later, the idea of “living and socialists” came under pressure for electoral reasons.

Nor had ILPers set themselves an easy task. They were trying to appeal to people who led hard lives, many of whom were resistant to radical ideas. In times of recession and rising unemployment, many ILPers were unable to pay their subscriptions. As a result, local branches sometimes found it a struggle to continue with their activities.

The ILP published a stream of literature, leaflets, pamphlets, books and newspapers. In the early 1920s, the ILP’s official paper, renamed New Leader, was edited by one of the most influential socialist writers of the time, H N Brailsford.

In the late 1920s, the ILP Arts Guild sponsored the Masses Film and Theatre Guild to show political films. During the inter-war years and after, ILP summer schools, which combined serious politics with social activities, played host to a wide variety of national and international speakers.

Perhaps it was this sense of community and fellowship which did much to sustain the ILP after the Second World War. The spirit of the old ILP thus influenced the new generation and has encouraged them to renew the ILP’s political message.

“We were furnished with sandwiches, a primus stove for making tea and stacks of leaflets, pamphlets and the ‘Clarion’. Leaflets and pamphlets we gave away; the Clarion we tried to sell. Arriving at some village in Derbyshire or Cheshire we held an open-air meeting to catch the people as they came out of church or chapel. We were young and raw and given to buffoonery. These was a tradition that one Clarion group had pasted some posters with the legend, ‘Read the Clarion’, on a herd of cows in a field. We scrawled slogans in chalk on barns and farmhouse walls…We sang ‘England arise, the long, long night is over’ outside pubs and on village greens.

“At the club-house, after a ride through the lanes of Cheshire or over the Derbyshire hills, we ate an enormous tea of ham, pickles, jam and cake…Washing up followed, after which we cleared the tables away for either a meeting, a play or a concert, finishing the evening by dancing…By ten o’clock we were shooting down Schools Hill, bunched of wild flowers tied to our handle-bars, apples in our pockets, and the wind lifting our hair.”

The first two of six instalments of ILP history taken from the pamphlet are:
The Early Years
Ethical Socialism