“The ILP was not so much a Party, more a way of life.”

In trying to change society the ILP has, throughout its history, been challenging the ‘common sense’ ideas of the time.

Standing out against popular opinion and fears is not easy. It takes courage, commitment and a great deal of patience.

Over the years, ILPers have been involved in numerous campaigns, sometimes successfully but often not so. On many occasions their arguments on the issues of the day appeared to be making little headway. Yet, at a later date, certain ILP heresies did become more widely accepted. 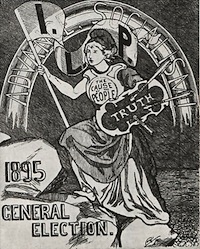 This is not to say that the ILP was always right. No organisation made up of human beings could expect to be. However, the record is worth considering.

When ILPers called for a party of labour separate from the Liberals, they faced the organised wrath of Lib-Lab trade unionists. But, eventually, the ILP and the trade unions set up the Labour Party.

Calling for votes for women was also widely derided. Those who took the issue to the streets had to expect a rowdy reception. Sometimes they needed physical protection. But no-one today seriously questions women’s right to vote.

When ILPers opposed the First World War they met ferocious hostility. Yet, as the war progressed, large numbers of people turned against the slaughter. And when ILP members resisted compulsory military service to replace the tens of thousands of young men killed on the battlefront, they were denounced as traitors. Yet, later, the right to conscientious objection was recognised.

When ILPers and others argued that men and women should be informed about birth control, many people were horrified, claiming that this would encourage immorality. Nowadays this material is widely available.

Even when people were persuaded by some of the ideas of the socialists, they often recoiled from anything connected with socialism itself. Traditionally, socialism has had a ‘bad press’.

Helen Crawfurd, married to a vicar in the impoverished Glasgow docklands, put it this way: “I used to listen to open-air speakers – and would feel they were speaking the truth – but if the word socialism was used I walked away. This was of the Devil.” Later she took up the ‘devil’s work’ and joined the ILP.

Today, the popular view is that socialism is dead. In their separate ways the experiences of communism in eastern Europe and a fourth election defeat for the Labour Party are taken as evidence of this view.

The modern ILP, now Independent Labour Publications and back in the Labour Party since 1975, thinks otherwise. It argues that much that has been done in the name of socialism has been wrong, but the need for a more equal, just and democratic society remains as important as ever. And while it is necessary to recognise the depth of social conservatism and the reasons for it, it is equally necessary to try to overcome it.

Today, it sees world poverty mass unemployment and the threats to the environment as some of the most important signs of the need for radical social change.

For this reason, the ILP intends to renew the work of those many thousands of men and women who kept going in spite of the odds.

Whether it is right or wrong on this occasion will be a matter for this and future generations to debate.

Read other extracts from The ILP: Past & Present here, including:
ILP History 1: The Early Years
– Great Expectations
– Beginnings in Bradford
ILP History 2: Ethical Socialism
– Independent Women
– Living for that Better Day
ILP History 3: Labour’s Rise and Disaffiliation
– Strongholds of the ILP
ILP History 4: War and After
– Internationalism: The ILP in War and Peace
ILP History 5: Labour in the 70s