DAVID CONNOLLY is unconvinced by the central argument of Paul Salveson’s Socialism with a Northern Accent.

Back in 2004 a referendum on regional government was held in the North East of England. The proposal was overwhelmingly defeated by 78 per cent to 22 per cent with the voters in Teesside rejecting it by a slightly bigger margin due to their fear of domination by Tyneside.

The critics claimed that the vague and ill-defined proposal would have created an unnecessary and expensive tier of government sitting uneasily above the then district and county councils, and the public agreed with them. The turnout was 48 per cent on all-postal ballot, so a little over 10 per cent of those who could have voted supported the proposal.

A lacklustre Yes campaign struggled to find its voice and, although it was  Government policy, the Prime Minister and North East MP Tony Blair was clearly no fan of regional devolution so it was left to John Prescott to fly the flag as best he could. Labour in local government was itself deeply uncomfortable with the issue with all the local authority leaders keeping a low profile. 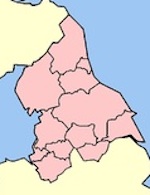 When the well-funded No campaign inflated a large white elephant (literally) in front of Durham Cathedral, the regional assembly would have been in the city, the media loved it and it obviously hit a note with a public cynical about politics and the ‘political class’. The end result was a disaster for the poorly organised Yes campaign which most observers believed had killed off any further debate on the topic for the foreseeable future. Even if, as some argued, the process had been designed to fail, the campaign never showed any signs of generating popular enthusiasm or galvanising its supporters.

If the proposal in 2004 lacked confidence and radicalism then the opposite is true of the ideas put forward by Paul Salveson in his new book, Socialism with a Northern Accent. His suggestion for the north of England, or any of its component parts, Yorkshire, Lancashire/Cheshire and the North East, takes the Welsh Assembly as its model and Rhodri Morgan’s early political leadership as its inspiration.

This means that he sees regional governments in England taking on similar powers to the Welsh which would include: agriculture and rural development, culture, sport and recreation, economic development and tourism, education and training, the environment, health, transport, housing, social welfare and town and country planning in what he describes as an ‘extensive range of powers’. This would leave Westminster with constitutional affairs, defence, foreign policy, energy, macro economics and social security.

This is indeed constitutionally radical stuff and if, by implication, the south of England – and its component parts – are logically invited over time to do the same then in theory at least we could have several ‘Welsh Assemblies’ in England as a whole. It should be said that the author sees all of this as a gradual process in the context of a federal Britain and a ‘democratic Europe of the regions’, though quite where the Euro crisis and the further centralisation of economic power in Brussels now leaves the latter concept – or the European Union itself – is a very interesting question these days.

In short, if the unitary British state as we have known it in the 20th century is now creaking and fragmenting then Salveson wants to speed up that process and push it to its logical conclusion with an independent or semi-independent Scotland (it’s up to them of course), a more confident Wales, and the empowerment of the English regions (Northern Ireland has its own dynamic). This constitutional radicalism sees the diminution of Westminster as the key to the renewal of a political socialism in northern England.

The author is a long-standing Labour Movement activist and a campaigner for regionalism and this book includes a substantive explanation of the history of socialism in the north which gives full recognition to the role of the Independent Labour Party and takes the ILP’s ‘ethical socialism’ as its inspiration for the future.

But I am not convinced by his central argument that regionalism can and should become the central plank of radical politics. In my experience, and I’ve lived most of my life in County Durham, English regional identity is a loose cultural concept largely based on media-shaped caricatures which have little more than a sentimental resonance with the general population. There is nothing terrible in that, it can be amusing at times, but it is not the basis for any substantive or sustainable political movement.

As the 2004 referendum showed – we were effectively voting on a general principle – regional government has little support in the north east despite a resentment of the so-called north/south divide, a concept which itself disguises the many complexities of class, economics and social status in Britain today. The demand for regional government originally came from the upper echelons of the regional Labour Movement in the 1980s but it found little echo on the streets of Newcastle, Middlesbrough or Chopwell (once known as ‘Little Moscow’) for that matter.

But there is another issue here as well and it’s one that is problematic for all socialists, irrespective of their view on regionalism, and it’s to do with the forward march of neo-liberalism in the past 30-odd years and the concomitant retreat of social democracy as the primary ideology of the state.

From Thatcher onwards, and arguably starting with the IMF crisis of 1976, the idea of the benevolent state, committed to the welfare of all based on contributions according to the ability to pay, has been under systematic attack. The rich are now routinely lauded as our saviours, the poor demonised as unworthy scroungers, and the hidden ‘value’ in public service is marketised, and where possible privatised, a process being extended by the coalition government in ever more radical ways.

Given this background there is a temptation to, as it were, ‘retreat to the heartlands’ (my term) and try to rebuild a radical movement from that part of England where the historic leaning to community and public service is arguably strongest, and I think that is what Paul is proposing. It is as if he believes that the central English/British state is now lost to social democracy and that it must first be rebuilt in the north and, if in this process Labour is itself reinvigorated, as he thinks it will be, then the political circle is complete and the rest of England can follow the example in due course.

I hope this is not too crude a summary of the politics of this book, though it can at times have an excessively optimistic feel to it, especially in relation to the Labour Party. That said, if you think that regionalism has a radical potential there is no point in arguing for a toothless version of it, as in 2004, you might as well argue for the radical vision and the author pulls no punches in that respect.

But the question remains: is the prospect of seven or eight or nine, or more, English regions visionary and radicalising to the extent that it should be central to our political future, or is it a source of endless fragmentation that will divide more than it ever unites?

I fear it is the latter, but before we get to that stage the next Labour government will be faced with the immediate and considerable challenge of empowering and re-energising an existing local government system that is in poor shape. That, I suspect, is another book in itself. 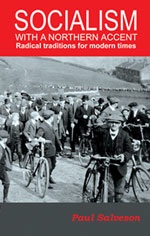 Socialism with a Northern Accent: Radical traditions for modern times, by Paul Salveson, is published by Lawrence & Wishart, price £14.99.