This year marks the 120th anniversary of the ILP, a milestone in British political history that we aim to mark and celebrate over the next 12 months in a number of ways.

The Independent Labour Party was founded on 13 January 1893 when some 120 delegates gathered at the Labour Institute in Bradford to create a national political party to represent working class people and strive towards a socialist society. 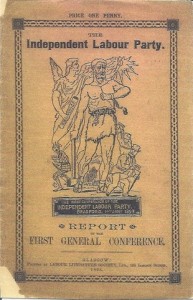 Here BARRY WINTER introduces our series of features on ILPers which will begin on Sunday – the ILP’s 120th birthday – with Fred Jowett, profiled by Ian Bullock, and continue on the ILP website throughout the year.

Here BARRY WINTER introduces our series of features on ILPers which begins today – the ILP’s 120th birthday – with Fred Jowett, profiled by Ian Bullock, and will continue on the ILP website throughout the year.

Many years ago, an elderly member of the Armley Labour Party branch in Leeds told me about a political hero of his youth. Sadly, I forget the name of the man who had so inspired him and for whom he retained such great affection.

What I do recall is that he was very active in the early ILP. Single-handedly, he held a very public, counter-demonstration as the Lord Mayor’s parade passed by, protesting at its pomp and extravagance when people were out of work. Indeed, such was his political enthusiasm that he even called his house ‘ILPer’, proudly fixing the title to his front gate for all to see.

The efforts of ILPers in that relatively poor part of Leeds continued to have an impact long after they had gone. For many years there were people who spoiled their ballot papers by writing ‘ILP’ across them. In a sense, they were keeping a memory alive.

So it seems highly appropriate that during the ILP’s 120th anniversary we should recall the women and men who joined its ranks wishing to create a better world for all.

Among those who aimed to build a socially just and democratic society, were some who were only passing through while others stayed the course.

Some ILPers became famous; some were great orators who could move large crowds; and some were loved. Others never aspired to become public figures but simply wished to play their part in whatever had to be done.

At its best, the ILP which they all helped build and sustain offered a meaningful political home. It also provided an education, an opportunity for people to develop their skills and abilities and, not least, it offered fellowship and fun. Like any human organisation, it could fall short of its promise but something of that ethical approach to politics and life was reborn in each generation.

In a society that today is wary and cynical about politics and politicians, where people feel they don’t matter, that they don’t count, it is important to keep alive their belief that another way of living is possible.

Many ILPers may have been more optimistic than was sometimes wise about social change. But their vision and passion not only gave their lives meaning, it became their gift to us.

It is a gift that we should value and – dare I say? – cherish.