When Chris Hall spoke at a packed meeting of the International Brigade Memorial Trust (IBMT) in Manchester in March about the ILP volunteers in the Spanish Civil War, one member of the audience asked in amazement, “Why have we not heard about this before?” 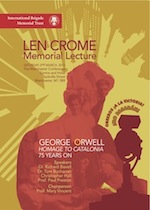 To answer her question properly would take a book in itself. It would have to delve into how the Communist Party largely monopolised the history of the civil war for decades. It would also acknowledge that the International Brigade’s volunteers were numerically far larger than the ILP contingent. No less important, it would have to understand the bitter political differences that arose between communists on one side and anarchists and the ILP’s sister party, POUM, on the other, in particular, the open warfare that broke out between them on the streets of Barcelona in 1937.

There was always another side to the dominant story, however. George Orwell’s Homage to Catalonia, first published in 1938, is his account of serving with the ILP/POUM. It recounts events in Barcelona and has remained in print ever since.

Sixty years later, Land and Freedom, the film directed by Ken Loach, took up the wider political issues raised in the book. As I understand it, Loach was influenced by a conversation he had the ILP’s youngest volunteer at the time, Staff Cottman. Having met Staff myself, I can understand why. He always remained loyal to Orwell.

What is remarkable is that this year’s IBMT event took as its focus the 75th anniversary of the publication of Homage to Catalonia. It is sign of how, at long last, we are able to move on. They deserve to be congratulated.

Chris Hall’s latest book, In Spain with Orwell, provides a history of the ILP from its foundation until the 1930s, and examines how the ILP responded to the Spanish Civil War and its links with POUM.

Set against that context, Hall has done a remarkable job researching the lives of the ILP volunteers themselves, British and Irish. What, perhaps, is striking is how similar they were to those who joined the International Brigade. They all shared a fierce hostility to fascism at a time when many preferred not to know.

That is why it is important to remember all those who risked their lives fighting fascism in Spain, whether in the International Brigades or in the ILP Contingent, for which many paid the ultimate price.

In Spain with Orwell: George Orwell and the ILP Volunteers in the Spanish Civil War, 1936-1939, by Christopher Hall, 2012, is available from Tippermuir Books for £12.50. Email: tippermuirbooks@blueyonder.co.uk

Christopher Hall’s book ‘Not just Orwell’: The Independent Labour Party Volunteers and the Spanish Civil War was published by Warren and Pell, in May 2009.