The following extracts are from EP Thompson’s ‘Homage to Tom Maguire’, first published in 1960.

The spread of socialist ideas

[The spread of] socialist ideas was not spontaneous but was the result of the work,over many years, of a group of exceptionally gifted propagandists and trade unionists. This did not begin with street-corner oratory and end with singing the Marseillaise in a socialist clubroom, although both of these activities played their part; it required also tenacity and foresight, qualities of mass leadership and the rare ability to relate theory to practice without losing sight of theory in the press of events. And if we must have one man who played an outstanding role in opening the way for the ILP, the man was a semi-employed Leeds-Irish photographer in his late twenties – Tom Maguire. 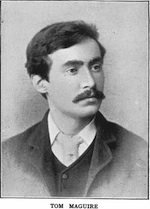 The Yorkshire ILP was a sturdy cross-bred. Its leaders owed much of their theory to Marxist propagandists; but they preferred the moral exhortations of William Morris…

The broad ethical appeal was the same whether it was voiced by the Quaker Isabella Ford, or Margaret McMillan (‘Educate every child as if it were your own’), or by the free-thinker Charles Glyde: ‘I wish to treat all poor as I would my father, mother, sister, or brother.’ In the early nineties this ethical appeal gave fervour, self-confidence and stamina to the movement; later it was taken out of context… But in 1892 this authentic moral revolt was one of the first indications to a close observer that the ILP had come to stay: ‘it is of the people – such is the secret of its success.’ [from a letter from Tom Maguire to Edward Carpenter]

A party of youth

The Yorkshire ILP was a party of youth; its leaders … were young; the men and women who staffed the Labour unions and clubs, the Labour churches, the trade unions and Trades Councils, were often in their twenties…

The young men of the Yorkshire ILP owed much to Tom Maguire. He had been the point of junction between the theoretical understanding of national leaders, the moral teachings of Morris and Carpenter, and the needs and aspirations of his own people. Nothing in history happens spontaneously, nothing worthwhile is achieved without the expense of intellect and spirit. Maguire had spent his energies without restraint. A poet of real talent, his feelings had been assaulted by the filth of Leeds; the rag, shoddy, and wool-combing industries, with their toll of disease and the dread of anthrax.

Early in March 1895, in his thirtieth year, he collapsed with pneumonia; his comrades found him without food or fire in the house. He died on 8 March, refusing the services of a priest: ‘I will stand or fall on the last 12 months of my life and not the last five minutes’. His funeral was attended by a demonstration almost as large as those of 1889-90, in which Jewish tailoring workers and Irish labourers, gasworkers and ILP councillors, all joined…

After Maguire’s death, a correspondent in the Yorkshire Factory Times commented on the breadth of his reading and the volume of his propaganda work which he undertook in these years – ‘Three lectures each Sunday, and two, and occasionally three, in the course of a week, in addition to articles, poems, and letters to the press.’

It is time that this ‘provincial’ was admitted to first-class citizenship of history.

EP Thompson’s ‘Homage to Tom Maguire’ is from Essays in Labour History, edited by Asa Briggs and John Saville, published by Macmillan in 1960.

You can find other ILP profiles here.