“The last half century has seen a fundamental shift in attitudes to work,” argues author Rory O’Kelly in a new Chartist ebook examining the effects of the 2007 Welfare Reform Act, which replaced incapacity benefit and heralded a new political approach to work and welfare. 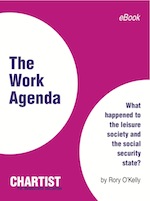 In The World Agenda: What happened to the leisure society and the social security state?, O’Kelly claims that while work was once seen as “a means to an end”, an activity “central to the production of goods and services”, which would reduce as society progressed, it’s now regarded “as good in itself” and “maximising the number of people working and the amount of work done [is] self-evidently right”.

The political and practical impact of this on attitudes to medical incapacity for work has been profound, he says. “Instead of being seen as a fact of life, illness is now presented as a construct which can be changed by political means.”

When Incapacity Benefit was replaced by Employment and Support Allowance, it erased the very idea of ‘incapacity for work’ in favour of ‘limited capacity for work’, says O’Kelly, a former DHSS worker and advisor on welfare benefits for the charity Mind.

“The Act itself was part of an ideological shift which occurred, roughly speaking, between 2007 and 2011, which has now established a dominant new paradigm in thinking about incapacity.”

In the pamphlet, O’Kelly examines the historical and political background to these changes, looks at different concepts of incapacity, and scrutinises the ideological assumptions behind political approaches to work and the role it now plays in society.

He writes: “One does not have to be a Marxist to see that where someone employs someone else it is to make a profit out of it; that is, because there is an expectation that what they produce will be worth more than the cost of employing them.

“This understanding becomes confused by seeing work as a form of welfare, and still more by the further confusion of believing that an employer is a sort of benefactor. The idea that ‘creating employment’ is a government objective leads directly to the belief that a person or company which ‘creates jobs’ is performing a public service rather than pursuing their own economic interests.

“This provides the background for addressing more directly the changing attitude towards incapacity for work embodied in the replacement of Incapacity Benefit by Employment and Support Allowance.”

The World Agenda: What happened to the leisure society and the social security state?, by Rory O’Kelly, is published by Chartist, and can be downloaded here.