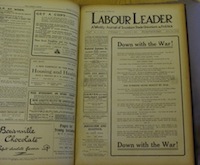 On 6 August 1914, just nine days after the start of what came to be known as World War One, the ILP published a front-page appeal in its weekly journal, Labour Leader, imploring the “workers of Great Britain” to unite with those across Europe and resist the government’s call to arms.

“Though our governments declare war, we declare peace,” it said. “Stand true in this hour of crisis. The flag of International Solidarity is greater than the flag of Britain, of Germany, of France, of Austria, of Russia. It waves over all.”

Here we reproduce the editorial in full as part of our series on the ILP’s role in the World War One peace movement.

Down with the War!

DON’T MAKE THEIR QUARREL YOURS.

One Million Trade Unionists and Socialists of Austria have protested against the war.

Three Million Trade Unionists and Socialists of Germany have protested against the war.

Workers of Great Britain, unite with the organised workers of France and Russia in saying that though our Governments declare war we declare peace.

Stand true in this hour of crisis. The flag of International Solidarity is greater than the flag of Britain, of Germany, of France, of Austria, of Russia. It waves over all.

Why should you go to war? What have you to gain from war? What has war ever done for you? What did the last war – the Boer War – do for you? Twenty thousand workers were shot dead on the battlefield. You are still paying £12,000,000 every year in food taxes for it. The workers of South Africa are worse off than ever. The rich mineworkers alone benefited.

THE WORKERS NEVER BENEFIT BY WAR.

IT IS THEIR WAR, NOT YOURS.

Workers, even now you can stop this terrible calamity if you will! No Government can continue to engage in war if its people say with sufficient strength: THERE MUST BE PEACE.

Say it in your thousands. March through the streets and say it. Gather together in your squares and market places and say it. Say it everywhere. Say it, and go on saying it until the Government heeds.

Down with the War!

More articles on the ILP and World War One are available here.

You can read more about the ILP’s history here and here.