The story reveals a lot about the troubled relationship developing between the ILP and the Labour Party at local and national levels. It also shows that the ILP was a grassroots organisation whereas the Labour Party was an electoral alliance, determined to win elections rather than change hearts and minds. 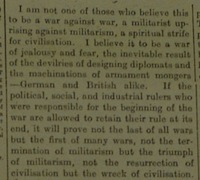 “I am not one of those who believe this to be a war against war, a militarist uprising against militarism, a spiritual strife against civilisation. I believe it to be a war of jealousy and fear, the inevitable result of the devilries of deisgning diplomats and the machinations of armaments mongers – German and British alike. If the political, social and industrial rulers who were responsible for the beginning of the war are allowed to retain their rule at its end, it will prove not the last of all wars but the first of many wars, not the termination of militarism but the triumph of militarism, not the resurrection of civilisation but the wreck of civilisation.”
Fenner Brockway, editor of the ILP newspaper, Labour Leader, 10 September 1914

This article explores the history of the Independent Labour Party (ILP) during the years 1914 and 1915 in the area now covered by Hebden Royd town council. In doing so, it also looks wider at the politics of the Sowerby Parliamentary Division, the forerunner of Calder Valley constituency, because local ILP activity often took place on a divisional, rather than at a local branch level.

The Sowerby Division Labour Representation Association (‘Sowerby LRA’) was the embodiment of the Labour Party within the Sowerby Parliamentary Division. At the time, the Labour Party was an electoral pact between the trade unions and socialist societies and parties, including the ILP, dedicated to winning independent working class representation in council and parliamentary elections.

At that time, the ILP’s connections in the West Riding and East Lancashire were particularly strong. It was founded in Bradford in 1893 and its first treasurer was John Lister of Shibden Hall, Halifax. Philip Snowden, who became MP for Blackburn in 1914, started his political life in Keighley ILP.

When the ILP held its ‘coming of age’ conference, also in Bradford in April 1914, there was a delegate present from Hebden Bridge ILP, a Mrs J Wheelhouse. It seems likely that she was Nancy Wheelhouse, a fustian machinist who lived in Eton Street with her husband, Joseph, also a fustian worker and executive member of Sowerby LRA.

Mrs Wheelhouse was not a lone voice in Hebden Royd, nor in the upper valley. Records show that during the period immediately before World War One, and just after war was declared, there were ILP branches in Luddendenfoot, Mytholmroyd, Hebden Bridge, Charlestown, Todmorden, Ripponden and Sowerby Bridge. The minute book of Sowerby LRA makes reference to an ‘ILP institute’ in Hebden Bridge, but nothing is known about its location, size or longevity.

The ILP responds to the War 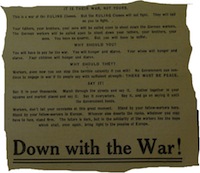 Subsequent editions of Labour Leader and pamphlets spelled out a series of political aims to rid Europe of future wars. These included:

The NAC immediately declared that the ILP and its branches would not help recruit volunteers for the war. On 24 September 1914, Labour Leader announced on page 7 that a conference of ILP branches representing Huddersfield, Halifax, Sowerby, Holmfirth and Dewsbury Parliamentary Divisions had passed “a resolution … unanimously and enthusiastically … endorsing the policy of the National Administrative Council”.

Two days later Sowerby LRA resolved “that we as an executive cannot see our way to take part in any recruiting but allow each individual member to use their own discretion”. In doing so, it expressly rejected the Parliamentary Labour Party’s position seen in the minutes below.

So, at that time, Sowerby LRA took the same position as the ILP. This anti-war spirit was reflected nationally by the resignation of ILP member Ramsay MacDonald as chair of the Parliamentary Labour Party (effectively, stepping down as leader of the Labour Party) because it decided to vote for ‘war credits’ (ie. for funding the war). MacDonald was replaced by Arthur Henderson, not an ILP member, who served in the coalition war cabinet in 1915.

Sowerby LRA breaks with the ILP

In early 1915, however, Hebden Bridge ILP remained defiantly optimistic. Undeterred by recruitment fever, the branch held their ’annual business meeting’ at the Trades Club (reported in the Hebden Bridge Times on 12 March 1915). The report says “the branch has had a very successful year”. ‘Mr (sic) N Wheelhouse’ was elected auditor. Apparently,

“a vegetarian supper was served, which consisted of the following: tomato and nut soup; vegetarian pies with potatoes, roasted in butter; mock salmon steaks; macaroni cutlets; savoury gravy. Mr W Robertshaw, of Eastwood, was the caterer.”

The picture of vegetarian pacifists enjoying a meal together in the Trades Club may sound strangely familiar, but we should recall that Nancy and the others were working people likely to have had only a rudimentary formal education.

They were also likely to have been the odd ones out in a town that was sending more and more recruits to the front. The pressure to change must have been immense and eventually, on 24 October 1915, the Sowerby LRA executive broke with the ILP. The minute book reads: “Resolved that as an executive we take part in the joint Labour recruiting campaign.”

Perhaps as a face-saver, and a compromise with ILP comrades, it also resolved “that this executive press upon the Labour party to oppose conscription unless it is accompanied by the conscription of all the material wealth of the country”.

Mr Ogden JP (the Labour Party parliamentary candidate at the time) “then addressed the delegates present”. Did Ogden attend to help assert Labour Party pragmatism over the ILP’s anti-capitalist pacifism, or was he there co-incidentally to address the meeting on another matter? Whatever happened, afterwards we know that “tea was provided … in the Trades Club Hebden Bridge by the Club Committee. After, In the Evening an enjoyable Smoking Concert was held in the Trades Club.”

Joseph Wheelhouse, Nancy’s husband, was present at this meeting, although we do not know how he voted. Nancy, however, attended the ILP annual meeting the following year in 1916, so she does not seem to have waivered. Given that sometimes she is referred to in ILP conference literature as ‘Mrs J’ and at other times as ‘Mrs N Wheelhouse’, it may be interesting to see if this change of nomenclature coincides with the split between Sowerby LRA and the ILP. It could provide a basis for fanciful speculation about how the politics of the time might have made an impact over the Wheelhouse dinner table.

Even if the ILP was no longer dominating Sowerby LRA politically, it still continued to be the most outspoken source of views that were widespread in the Labour movement, and perhaps amongst some upper valley Liberals as well. These views were expressed by the Hebden Bridge Labour and Trades Council in its 1915 annual statement to the Hebden Bridge Times:

“The nations of Europe have been plunged into the greatest war the world has ever known. Militarists and diplomats have succeeded in bringing this awful calamity upon the nations without consulting the workers in any of the countries involved… We sincerely trust that the war will end militarism and secret diplomacy; that it will destroy forever the accursed profit-making armament rings; and that democracy will assert its power in demanding that international disputes shall in future be settled upon the lines of reason and arbitration, common sense and justice.”

They were echoed at Eastwood, where the Liberals, in their first annual meeting after the declaration of war, discussed “the ending of the dismal system of secret diplomacy … the abolition of private profits out of armaments construction, and … the establishment of a permanent court of arbitration to which all international disputes shall be referred.”

All of which would have been familiar sentiments to the ILP branches in the upper valley and, in particular, to that inveterate ILP annual meeting attender, Nancy Wheelhouse.

This paper explores the history of the Independent Labour Party in Hebden Bridge, Mytholmroyd and Cragg Vale during the years 1914 and 1915. Because evidence is sketchy, it looks even wider and considers the Sowerby Parliamentary Division, the forerunner of Calder Valley constituency. However, national ILP sources have been consulted to find out more about the politics of the ILP, as local records are almost entirely silent as to the views of Hebden Royd’s ILPers.

Thanks to Calder Valley Constituency Labour Party and Independent Labour Publications for permission to reproduce primary sources. Thanks also to my friends, Mike Crawford and Barry Winter (ILP), for their advice on the text. I dedicate this piece to Mrs Nancy Wheelhouse and the thousands of other comrades from the ILP who worked to make peace and social justice a reality, without seeking office or thanks.

Jonathan Timbers is a Labour councillor on Hebden Royd Town Council and Mayor of Hebden Royd for 2014 – 2015. Hebden Royd covers the townships of Hebden Bridge, Mytholmroyd and Cragg Vale. The council suppports the local voluntary sector through grant-giving, it provides allotments and runs the local commercially successful cinema. It was accredited as a living wage employer in December 2013.

This is an edited version of an article written for Hebden Royd’s commemoration of WW1.

More articles on the ILP’s role in resisting the war can be found here.