Support for the new Greek government is vital and in Labour’s interests, argues MIKE DAVIS.

Hope, dignity, bread could summarise the slogans of the newly elected Syriza party in Greece. It has been an historic victory, the first radical left party to be democratically elected in Europe since the Second World war. Expectations of the people will be high for the new government. So too will be opposition from banks, corporate capital and neoliberal politicians.

Elected on a landslide vote, gaining 149 seats – two short of an absolute majority and 36% of the poll – Syriza, led by the 40 year old Alexis Tsipras, has grown from small beginnings 10 years ago to replace the discredited socialist party Pasok as the hope and champion of the Greek people for an end to five years of crippling austerity.

Parallels with the newly elected Spanish popular front republican government of 1936 or the Chilean government of Salvadore Allende in 1970 are not fanciful. The commitments of these two earlier governments to radically redistribute wealth and power, to nationalise the banks and secure a new deal for workers and peasants are not dissimilar to the radical commitments of Syriza to end the debt burden and poverty of a beleaguered people resulting from the harsh conditions of the bailout, to build a ‘bottom-up’ social transformation, and to end corruption and tax avoidance of the corporate and political elites.

The Spanish republic was rapidly immersed in conflict as anti-democratic forces allied with the monarchy and landed gentry took the form of a military insurrection led by General Franco. After a three year civil war the Republic ended in defeat. Salvadore Allende’s radical ‘Marxist’ government was upended in a bloody coup supported by the US CIA. Both reactions led to the deaths and imprisonment of hundreds of thousands of workers, socialists, communists and democrats.

There are two striking differences with republican Spain and Greece in 2015. There is no Hitler or Mussolini to aid Greece’s home grown fascists in Golden Dawn and the deep state military which has been licking its wounds since the overthrow of the Colonel’s junta in 1974.

Secondly, globalisation. This means a Syriza-led Greece faces a more complex corporate financial opposition in the shape of the neoliberal dominated IMF, European Central Bank and EU. These powerful forces that have already wreaked huge damage on the Greek economy through its compliant governments are now positioning to overturn the democratic will of the Greek people.

The forces ranged against the Greek government today are the unaccountable vested interests of global capital, currently in the shape of the Troika. Syriza minister are refusing to negotiate with unelected officials and want only to engage with elected European governments.

Syriza have accommodated. No longer debt cancellation but debt relief is the policy aim. Nationalisation of the banks remains party policy but was not prominent in the recent Thessaloniki programme. The case for ending austerity is compelling. Public services and welfare cuts, privatisation and 30% reduction in wages and pensions has not rebooted the Greek economy. The debt as a proportion of GDP has almost doubled in six years (108% of GDP in 2008 to 176% of GDP in 2015).

The €240 billion bailout has simply gone to banks and back in interest payments while unemployment has grown to over one in four adults and two out of every three young people. This is no basis for economic recovery let alone paying off a debt or increasing state tax revenues. Austerity only works for the rich and even enlightened capitalists see the inhumanity of such a programme.

Secondly, the people have had enough. This is not just the working class who have seen wages eroded and collective bargaining rights removed but also Greece’s sizeable middle class and small business people many of whom turned to Syriza in the election.

Thirdly, a movement against austerity is gathering force across Europe. Podemos (We Can) the recently formed radical party in Spain came from nowhere to win seats in the European parliament in May. There are similar radical movements in Italy, while in Germany Die Linke and the Green party are growing forces to be reckoned with.

Within the traditional social democratic and Labour parties that have sustained links to the trades unions, as in Britain, France and Scandinavia, an anti-austerity pro-growth sentiment is gathering pace. The Greek result could help swell that opinion. Labour’s leaders will ignore it at their peril as we approach the May general election.

Labour should see writing on wall

Labour leader Ed Miliband should see the writing on the wall. People are sick of austerity policies. Huge cuts in living standards, privatisation and light touch tax and regulation of corporate capital were never going to restart a sustainable economy working for the many not the few. Unfortunately, unless Labour move away from the current austerity-lite agenda its own fate could soon resemble that of other discredited European social democratic parties.

So the socialist and democratic left must be quick and determined in getting the message of Greece. The left has the initiative with Syriza’s victory. It must capitalise on it. An Early Day motion in the British House of Commons (EDM 729) welcoming the Syriza victory and its economic and social plans should be endorsed by the whole parliamentary Labour party.

The arguments for a debt amnesty and renegotiation have precedents. Germany, the main bulwark for fiscal discipline itself enjoyed a debt pardon in 1953 when a London conference of western world leaders agreed to write off a crippling debt burden that opened the doors to the German ‘economic miracle’.

Having undergone Italian fascist and Nazi occupation Greece emerged from the Second World War into a civil war. By the end its economy was shattered. No reparations have been paid by Germany to Greece. War losses at the hands of the Nazis included: demolition of a quarter of all buildings; annihilation of 2,000 villages; destruction of 66% of motor transport, 75% of the merchant fleet, 90% of railway rolling stock and all main road bridges; and deportation, slaughter or starvation of around 700,000 people, including the murder of 60,000 Jews.

Further, the Greek people have endured six years of military dictatorship (1967-74), followed by more than 40 years of rule that has largely only benefitted the corrupt political elites, corporate and shipping oligarchs who enjoyed a tax free regime.

With a 50% debt cancellation and restructuring of the remainder the government will be able to restart the economy on a sustainable growth course, with new jobs and a clean progressive tax system.

In Britain the Greece Solidarity Campaign has coordinated activity in support of the anti-austerity movement in Greece and sought to raise awareness. We recognise the struggle of the Greek people is our fight. It has established Medical Aid for Greece, organised fact finding delegations to Athens with Labour MPs and MEPs, trade union leaders and local activists, organised local publicity initiatives, the latest being at the British Museum to lobby Angela Merkel on her recent visit.

Australian trade unionists have campaigned to ‘Let Greece Breathe’. TUC leader Frances O’Grady has put out a powerful call for Solidarity with Syriza. Letters to the press and an Early Day Motion signed by a cross-party group of MPs have called for active support.

For Labour and trade union activists there are basic forms of solidarity: pass a resolution through your union, political party, faith or community group (see below). Lobby your MP or MEP to support debt relief and the democratic mandate of the Greek government in Europe and Westminster.

The Campaign aims to extend its activities into establishing a cross-party parliamentary support group. GSC is not a charity and recognises that the best way to support the Greek people is to end austerity policies in our own countries. That would be the best gift we could exchange with our Greek compatriots. 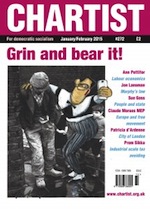 Mike Davis is editor of Chartist and press officer for the Greek Solidarity Campaign.

The January/February 2015 edition of Chartist, pictured left, is available to download in pdf format here.