Chesterfield boasts that it hosts ‘the biggest and most prestigious’ May Day gala in the country’ and this year’s event on Monday 4 May looks set to rival any from its past.

The day will start with the traditional march leaving Town Hall steps, banners aloft, at 11.00am.  The procession will be led by the Ireland Colliery Band while a samba feel will be provided by the Urban Gypsies. 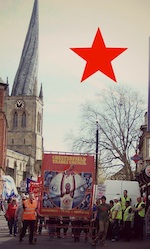 This year marks the 100th anniversary of the erection of statues of former mining MPs William Harvey and James Haslam. Former North East Derbyshire MP Harry Barnes will address the marchers as they assemble about the significance of the centenary, and then the march will go past the statues en route to New Square.

On arrival Christine Blower of the National Union of Teachers will speak, joined by Lee Baron of the Midlands TUC and Shatha Besarani of the Iraqi Womens’ League.

Following the rally, New Square will be taken over by music and dance. Ian Prowse will kick off proceedings at 12.30pm followed by SwampTrash and the Max Pashm Band, providing the rythms, the swing and the beat.

For those with more leisurely musical preferences the Sheffield Socialist Choir will sing in the Market Hall Assembly Room at 1.00pm.

The voluntary and community sector will fill the New Square Market stalls, raising issues and awareness of local and international concern as well as some much needed funds.

The May Day weekend also features the Chesterfield premiere of a film about local men and women involved in the miners’ strike. The screening takes place at the Winding Wheel function room at 7.30pm on Sunday 3 May and is followed by songs from the popular quartet Toein’ in the Dark.

“All in all, there is something for everyone in Chesterfield on May Day,” said James Eaden, president of Chesterfield TUC. “Street entertainment, bouncy castle, bands, dancing and the great feeling of people coming together in solidarity, peace and celebration, makes a day to remember for the many who descend on the market square for Chesterfield’s May Day Gala.”

For more information contact Colin Hampton on 07870 387999 or colin.hampton@duwc.org.uk, or visit the Chesterfield May Day Facebook page.