You don’t have to look too far to see the absurdities in Labour’s leadership election, claims HAZEL HEAD. Here are some of them.

The current electoral system was introduced to broaden the electorate and make it more representative of Labour voters. It was supported by the right with the intention of limiting the influence of what were seen as left-wing activists operating through the trade unions and constituencies.

And yet the extension of voting rights beyond the membership to registered supporters is delivering a huge surge in support for the left-wing candidate. Belatedly some now wonder whether the old system, giving MPs a third of vote, might not have had something to say for it after all. 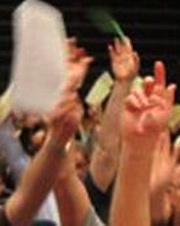 The nomination system for leadership candidates used to mean support from 30% of the Parliamentary Labour Party was needed for an MP to get on the ballot. In the Collins review it was proposed that this be reduced to 20%. At the behest of MPs, it was in fact reduced to 15%.

When the leadership election was announced, many MPs felt that this was too high and prevented a broad range of candidates winning support – Mary Creagh failed to get enough backers and viable deputy leadership candidates, such as Stella Creasy, also struggled to do so.

Realising this was delivering a very narrow field, a number of MPs used their nomination for a candidate they had no intention of voting for (Corbyn) only to see him storm ahead in the polls, prompting a series of regrets – ‘I was a moron,’ said Margaret Beckett.

Having suffered a crushing election defeat on a mildly social democratic platform, the Labour right immediately went into overdrive to castigate the party for straying from the path of New Labour (despite the fact that New Labour’s last election victory in 2005 was a pretty dreadful affair). As the leadership election got underway, the commentariat grumbled about how timid and boring it was. The Blairites castigated the party for not having the courage to have a real debate about its fundamental orientation.

Having reached this late stage in the contest, when ballot papers are being returned and campaigns entering their final phase, some so-called grandees of the party are worried about the choice that party members and supporters seem to be making. When in office these grandees were fond of lecturing opponents – the public sector unions among them – about the importance of individual choice – in schools, hospitals and council service, for example.

We now have the unedifying spectacle of these same champions of choice calling for nominated leadership candidates to withdraw to help manipulate party members and supporters into making the right ‘choice’.

I could add that there is also something ‘a bit off’ about a group of people (Alan Johnson, Gordon Brown, Jack Straw, Neil Kinnock …) who between them have reasonable experience of losing elections (1987, 1992, 2010, 2015), lecturing us on what is and is not ‘electable’.

The ILP will be discussing the future of the Labour Party and the politics of radical hope with Compass in Leeds on 19 September. See here for more details and how to book.

See also: ‘Labour’s Leadership Election: A Problem Foretold’, by Will Brown
‘The Politics of Panic and Failure’, by Ernie Jacques
‘The Revolt No-One Saw Coming’, by David Connolly
‘Get Real: Corbyn and the Delusional Left’, by Gary Kent