Former Labour leader Gordon Brown traces the life of the Party’s first figurehead in a half-hour documentary broadcast on BBC Radio4 this morning (Thursday 10 September), a programme to be repeated this evening at 21:30 and available via BBC iPlayer. 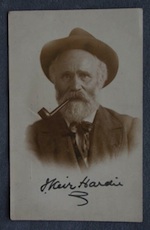 Brown first learned about Keir Hardie when he was lying in hospital, temporarily blinded from a rugby accident. Then an undergraduate at Edinburgh University, he listened to tapes sent by Hardie’s biographer, Fred Reid, who appears in the programme.

Brown embarks on a personal journey, following Hardie from the shipyards of Govan to Lanarkshire mining villages, union activism and the formation of the ILP.

On the journey he attempts to understand how Hardie, an illegitimate child, brought up in dire poverty and with no formal schooling, who was down the mines by the age of 10, became the first leader of the Labour Party.

Visiting the church Hardie joined in Hamilton, a town where Brown’s own father was a minister, he explores the influence of Christianity and temperance on Hardie’s political development.

And arriving at Hardie’s final home in Cumnock, he shows that it was his moral outrage at the poverty, hypocrisy and injustice he experienced in early life, followed by his conversion to socialism while working as a union agent, that convinced Hardie of the need for a new party to represent working people in Parliament.

Brown concludes that Hardie “never flinched from an unpopular stance”, and recalls that his death on 26 September 1915 was not even acknowledged at the time in the House of Commons. “One hundred years on,” says Brown, “James Keir Hardie deserves never to be forgotten.”

Over the next few weeks Hardie will be remembered in a series of events to commemorate the centenary of his death.

These include the Keir Hardie Centenary Conference at the Working Class Movement Library in Salford on Saturday 26 September and the launch of What Would Hardie Say?, a new book of essays on Labour’s founding leader, at Labour Party conference in Brighton on Sunday 27 September.

Details of these events and more are available here.

You can listen to ‘Keir Hardie: Labour’s First Leader’, by Gordon Brown, here.