Labour’s defeat and Corbyn’s victory framed the discussions at the ILP’s joint conference with Compass last weekend where the prospects of left renewal and signs of radical hope were uppermost in people’s minds.

“This reckoning has been a long time coming,” said ILP chair David Connolly as he opened the organisation’s joint conference with campaiging pressure group Compass in Leeds on 19 September. 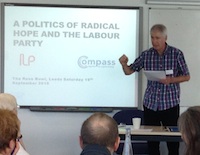 More than 60 people were drawn to the Rose Bowl in Leeds Beckett University to discuss ‘The Politics of Radical Hope and the Labour Party’, reflecting on the devastating general election result in May and the game-changing landslide victory by Jeremy Corbyn in the Labour leadership election just a week before.

Inevitably, Corbyn’s victory dominated people’s thoughts, not least because the first speaker was close Corbyn ally and new shadow minster for communities and the consitutional convention, Jon Trickett MP. Trickett gave an insight into how the Corbyn campaign had ridden its utterly unexpected “tsunami” of support, and how it now hoped to turn that wave into a tide of permanent change.

“Britain cannot go on in the same old ways,” Trickett said. “We are at a T-junction.” The question Britain faced, he argued, was whether to keep right and continue with the Thatcherite principles of the past 30 years, or to make a new left turn.

He acknowledged that the campaign was taken by surprise by the “seismic” upsurge of support as 100,000 supporters signed up within two weeks, raising a quarter of a million pounds in small donations. Corbyn’s victory, Trickett argued, was a sign of the “insurgent mood” of discontent in the country.

“There is something new out there,” he said “The question now is how do we capture that movement and make it enduring.”

Trickett maintained that the left in Britain has never really had a theory of change, while Labour has lacked a strong narrative about how to create wealth without relying only on the market, a failure that has bedevilled left politics since 1979.

Labour, he said, now has to find a new language to talk about economic issues and to challenge the three ‘mad’ ideas that dominate current debate: that only billionaires create wealth, that the state is always inferior to the private sector, and that you can close the deficit by cutting spending.

Pushed to clarify his stance on constitutional change, Trickett suggested he has shifted from his former commitment to first past the post, although he argued that proportional representation might not be the leadership’s top priority and, in any case, it was for the party to decide where it stood on the issue.

The Corbyn shadow cabinet reaches out as much as possible to all wings of the party, he argued, as it contains only four close allies out of 30 members. Moreover, he said, we need now to develop a very different idea about what leadership is, suggesting that Corbyn may develop a more collective style of leadership in which we all have a stake.

The shadow cabinet’s agreed priorities were around three ‘pillars’: the UK’s role in the world; how to challenge the Thatcher settlement; and how to resolve the political crisis in the UK.

It is the last of these that is Trickett’s main responsibility and he confirmed his recent announcement that he will hold a constitutional convention and citizens’ assemblies, seeking to draw in people from all walks of life and create a conversation among a wide variety of groups across civil society.

“I want to hear what people on estates everywhere think should be our political priorities,” he said.

Questions to Trickett ranged widely over this terrain, raising issues about middle class dominance of the Labour Party, the need to give greater priority to environmental issues, the role of co-ops in delivering public services, and the need to defend spending on mental health services.

“Is Labour capable of reforming itself to embrace the new sense of insurgency?” Trickett concluded. “We have to think the unthinkable because we’re in new times.”

Neal Lawson from Compass expressed a more cautious view of Corbyn’s victory, arguing that Labour still needed to find that combination of ethical principle and political pragmatism that has long been the hallmark of the ILP’s contribution to political analysis.

While fully endorsing the idea that the party had to change, Lawson argued that the direction of change still remains very uncertain. Like the protagonist in the film The Truman Show, Labour knows it needs to find a world beyond the confines within which it has been operating, but it doesn’t yet know what that world will look like.

Drawing on the ideas in his post-election pamphlet, Downfall, Lawson argued that Labour still has to come to terms with its recent electoral car crash, a loss that has not been fully addressed in subsequent discussions.

Lawson argued that Corbyn’s victory has not erased the underlying longer-term challenges facing Labour and social democratic parties more generally – the decline of older industries and the class alliances and organisations that came with them.

Addressing both the potential and dangers of social media, Lawson highlighted the fluidity of recent waves of political support – for Clegg in 2010, for the SNP last year, and now for Corbyn and the Labour Party.

While social media enables a form of ‘horizontal’ politics, where everyone can connect, it also creates enormous flux, he said, suggesting that support for Corbyn could be fleeting. The challenge, Lawson concluded, was “to make hope possible rather than despair convincing”, as Raymond Williams once put it.

The following discussion was kicked off by a response from Sarah Perrigo, who argued that Labour needed to be part of a broad alliance for change, based not on the narrow aim of winning elections with 35% of the vote, but on conversations with other parties and movements. It needs to create a popular coalition to realise the potential of “the progressive majority” in the country, she said.

This idea was challenged from the floor. Alliances between Labour and various campaigns and movements are very different to coalitions with other, competing political parties, it was argued. Furthermore, there is a difference between UK-wide parties like Labour and the Greens, and national parties who sought to leave the UK.

Hugo Radice, a Labour member in the Yorkshire dales, raised the question of how the party can sustain its current wave of enthusiasm. The key, he argued, was to have a series of small-scale, face-to-face discussions with members and supporters at local level – a ‘micro politics’ that worked in ways that social media could not replicate.

The ILP’s Barry Winter suggested that the left has to find a new language and do politics differently. It is facing a big learning process, he claimed. Lawson added that simple captivating ideas – such as Corbyn’s effective characterisation of the Tories as “poverty deniers” – relied on a lot of intellectual effort. It would take a great deal more to successfully challenge the full force of the hegemonic project the Tories are embarked upon.

For Lawson, this means Labour must recognise that sometimes good ideas come from other places. “We need to do politics at 45 degrees,” he said, combining the horizontal networks of new media and social movements with the continuing need for and importance of vertical politics conducte through the state.

“The Blairites ended up bending their values to modernity,” he concluded. “The challenge for the left is to bend modernity to our values.”

Kicking off the afternoon sessions, Sue Goss, author of Open Tribe, strongly endorsed the idea that there is a progressive majority in the UK.

Whether badged as ‘socially liberal’ or ‘socialist’, this majority challenges the notion that the profit motive is the only value that counts, she argued. The values that underpin neoliberalism, Goss said, are not the values that people actually have. Rather there was a need to treat people as ‘ends in themselves’, not a means to some other goal.

The left needs to build connections in order to allow hope rather than fear to prevail. “Hope allows us to face outwards,” she claimed, whereas fear drives us into tribal camps. While differences on the left matter, there is space for productive dialogue between different elements of the left so long as tribal boundaries remain fuzzy.

Questions and discussions arising from small breakout groups ranged over a wide canvas. Key issues were raised about how the Labour Party could and should respond to the influx of new members in what might be a narrow window of opportunity for growth and renewal – something the ILP has already addressed in its statement on the Labour leadership.

Local parties will be important here, it was suggested – they need to be asking new entrants what motivated them to become involved, not merely seeking to incorporate them as foot soldiers for the old style political campaigns and canvassing.

The ILP statement on the Labour leadership is here.