GERRY LAVERY of Unite Community Leeds reports from a conference in Birmingham set up ‘to challenge the myths around welfare and build a coalition to fight for our safety net’.

The well-attended conference on Saturday 31 October was called by Unite Community (Unite the Union’s community wing) and the Public Services and Commercial Services Union (PCS), which represents workers in the Department of Work and Pensions, and attended by members of groups concerned with social security problems and reform, such as Black Triangle, Disabled People Against Cuts (DPAC) and Derbyshire Unemployed Workers’ Centres.

The charter recognises increasing poverty in the UK where, despite being one of the richest countries on earth, hunger and eviction are seen as a “legitimate punishment for not being in work”. Social security should include “a safe warm home, good food, proper clothing and being able to participate in society”. The charter lists the following demands while Heathcote argued for joint campaigning:

Steve Turner, Deputy General Secretary of Unite, painted the broader political and economic context of the struggle for improved social security. He rooted today’s situation in the rise of neo-liberalism, which began in Chile in the 1970s and was then imported to Britain by Margaret Thatcher. Following the banking crisis, the Tories are now engaged in an attempt to reinforce this system by means of austerity, through ideological attacks and by silencing the opposition.

The interests of rich people are being upheld through tax cuts and tax avoidance totalling some £70 billion each year, while poorer people experience welfare cuts. ‘Champagne in the board room, foodbanks for the poor,” as Turner put it.

An essential part of the Tory project, he argued, has been to change the narrative about the relationship between the economy and society in order to justify government policies. So, for instance, divisions are drawn between so-called ‘strivers and shirkers’, suggesting that the social security system is too generous, even though spending is proportionately lower today than it was in the 1980s. Even in-work benefits are now being targeted for cuts.

Turner also argued that the Trade Union Bill is a means of attacking the organised working class and silencing the opposition, a tactic reminiscent of the early silencing of trade unions under fascism.

Meanwhile, the changes in constituency boundaries will disadvantage Labour while up to two million votes may be lost under the new voter registration process. The Tories are pushing these and other far-reaching policies despite only having the support of 24 per cent of the voting public.

Turner suggested that Jeremy Corbyn’s election as Labour leader has given us a moment of hope. The trade union movement has to stand up to attacks and the groups represented at the conference are key in that. There is a long tradition of civil disobedience and bad laws have been broken in the past. He urged the conference to be confident and to resist.

There were a series of campaigning workshops held throughout the day: on building a broad based coalition; on engaging with charities, religious bodies, foodbanks and non-governmental organisations; on equality and the participation of women, disabled people, young people and black and ethnic minority communities; and on what the Welfare and Work Bill and how it can be opposed. There was also a session on lobbying political representatives to win political support to stop the cuts.

One very well attended workshop focused on ‘changing the narrative’, asking ’how do we use the media to get stories out about the true effects of cuts to the welfare budget’. This is a tough but necessary task, otherwise it will be difficult to shift public opinion. 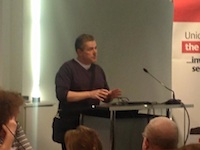 Mark Serwotka, PCS General Secretary (left), kicked off afternoon proceedings by focussing specifically on social security. Serwotka observed how millionaires had been enriched at the expense of poor people, arguing that austerity was ‘a political choice’.

The stakes are high in the campaign against social security restructuring, he claimed. For some it is literally a choice between life and death as their is increasing concern about links between suicide among claimants and government policy.

He welcomed the grassroots activity that had forced social security on to the trade union agenda saying it was time the trade union movement took the issue more seriously.

The presence of Jeremy Corbyn and John McDonnell at the dispatch box in parliament presents us with an opportunity to raise our concerns. Social security needs to become more firmly part of the anti-austerity campaign, he said.

We also need to argue for more housing, particularly for younger people, and that rates of housing benefit to landlords should be lowered. He raised the idea of strike action across the public sector against the one per cent pay freeze. Signs of hope were also reflected in community campaigns, in the recruitment of new members to the Labour party and in the launch of Momentum. The PCS win on the struggle at the National Gallery has also been hopeful and inspirational, according to Serowtka.

Towards the end of the conference grassroots activists talked about their campaigning work and support work. Speakers from DPAC, Unite Community Durham and Derbyshire Unemployed Workers’ Centres spoke with great experience, clarity and inspiration.

Paula Peters from DPAC, for example, emphasised the importance of maintaining maximum visibility when campaigning. She demonstrated DPAC’s social media campaigns and direct action, such as their ‘balls to the budget event’ earlier this year. She also urged campaigners to put aside differences and unite on common ground in defence of the welfare state.

Angela Appleby from Unite Community Durham and Colin Hampton from the Derbyshire Unemployed Workers’ Centres spoke of how their groups combined support activities, such as providing welfare rights advice and food and clothing banks, with more explicit campaigning work. DWUC held a ‘die-in’, for example, organised in protest against the suicides of people who were unemployed. Unite Community Durham also emphasised the importance of skills training in areas such as IT, and they are developing work with prisoners.

During questions and contributions from the floor there was a brilliant suggestion from a member of Black Triangle who proposed that Jeremy Corbyn and Angus Robertson from the SNP be lobbied to devote a whole session Prime Minister’s Question Time to the death of claimants subjected to the Work Capability Assessment (WCA). The case of Michael O’Sullivan is very relevant here as the coroner drew the link between his suicide and the WCA.

Other issues raised included the rights of people with Down’s Syndrome, funding the Morning Star as ‘our newspaper’, and the suggestion that Unite Community take up the cause of carers who receive less than recipients of JSA.

There was also a plea to take people with addiction problems more seriously. They are often excluded from mainstream society as many of them – in the experience of one delegate – were often more capable than the stereotypes suggest.

Liane Groves, head of Unite Community, closed the conference by emphasising the need to follow up with a campaign strategy and she suggested a national day of action against sanctions on 16 March 2016.

This article first appeared on the Unite Community Leeds website.