Keir Hardie dedicated himself to ‘constant agitation’ and left a singular political legacy in the form of the Labour Party. David Connolly reviews What Would Keir Hardie Say?, a book of essays published last September to coincide with the centenary of Hardie’s death.

Keir Hardie is an iconic figure in the history of the Labour Party. He was a political visionary and an outstanding organiser, a socialist radical who recognised the need to build a bridge to the wider working class even if that meant some compromises along the way, most notably in the broad nature of the Labour alliance itself. 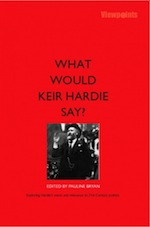 All sections of the party have claimed a connection with Hardie at some point and that includes the Blairites. Indeed, if memory serves, the glossy brochure the party produced in 2000 to mark the centenary of the Labour Representation Committee carried photographs of Keir Hardie and Tony Blair side by side with an accompanying text drawing some fairly outrageous parallels between the two. More recently, Hardie was mentioned favourably several times in the recent Labour leadership contest, and not always in connection with the eventual winner.

There is clearly a need to set the record straight regarding the man and his politics and this new collection of essays published to mark the centenary of his death aims to do just that.

By any standards Hardie’s story is a remarkable one. Born in North Lanarkshire in 1856 he started work at the age of eight as a message boy for a steamship company and by the age of 10 he had been sacked by a local wealthy baker for being late for work when both his brother and pregnant mother were ill. He was then hired as a trapper in the coal mine at Newarthill Colliery and it was around this time that he started night school.

In 1879 he became an agent in the Miners’ Union and in 1882 he converted to Christianity forming a church which was part of the Evangelical Union. As he later said, “my work has consisted of trying to stir up a divine discontent with wrong”.

Deeply frustrated with the political conservatism of the Liberal Party, Hardie and others sought independent labour representation through a new kind of politics, initially by founding the short lived Scottish Labour Party in 1888 and then the UK-wide Independent Labour Party in January 1893. In the previous year he had been elected to Parliament for West Ham South. In the House of Commons he was greeted with barely concealed contempt, not that it stopped him from raising working class issues, attacking the establishment and vigorously criticising the monarchy.

Hardie’s principal aim was to bring together the political and economic struggles of the working class and he worked tirelessly to win over the trade unions to this idea, eventually leading to the formation of the Labour Representation Committee in 1900 which became the Labour Party we know today after the 1906 general election when it won 29 Commons seats.

As William Knox, one of the contributors to this book, comments, “The creation of this broad alliance of middle class intellectuals of the Fabian Society, socialist societies and the trade unions was the singular and perhaps greatest achievement of any Labour leader in Britain, then or since.”

Hardie was duly elected chairman of the Parliamentary Labour Party but was constantly frustrated by former Lib-Lab MPs who, although now officially ‘Labour’, nevertheless retained their Liberal beliefs. He was always campaigning and travelling and, unlike some, did not succumb to the softer pleasures of parliamentary life.

A profound believer in internationalism, he was grievously disappointed by the failure of the parties of the Socialist International to mobilise workers in the combatant countries to stop the First World War. He correctly predicted it would be “the greatest calamity that Europe has ever seen” and died, some say, a broken man in 1915.

And yet, Hardie’s legacy in the form of the Labour Party lives on, despite its many trials and tribulations over the decades. Depending on your point of view, it is currently either in the process of creating a new popular radicalism of a type Hardie would recognise, or is doomed to the margins of British politics for ever more.

The book’s editor, Pauline Bryan, and publisher, the Luath Press, are to be congratulated for commissioning these essays, one of which is written by current Labour leader Jeremy Corbyn. Together they cover all aspects of Hardie’s life: his early years, his religion, trade unionism, political vision and strategy, his support for women’s suffrage and Scottish Home Rule, and his work as an MP. They capture a life of ‘constant agitation’ and for anyone who wants an accessible introduction to Hardie, this is the book to read.

As one contributor, Barry Winter, points out, “Hardie’s political life and ethical socialism can serve as a beacon to us.” In a different, but still profoundly corrupt and destructive world, his hopes and dreams of ‘a better day’ are as relevant as ever.

What Would Keir Hardie Say?, Exploring Hardie’s vision and relevance to 21st century politics, edited by Pauline Bryan, was published by the Luath Press, Edinburgh, in 2015.

Copies of the book can be purchased from Luath Press for £9.99.