The future of social democracy comes under scrutiny in a new publication from Compass chair Neal Lawson who argues that the Labour Party needs to undergo radical change if it is to remain relevant in the 21st century. 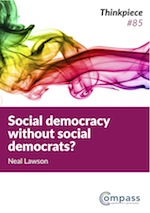 In Social Democracy without Social Democrats?, the 85th ‘Thinkpiece’ from ‘good society pressure group’ Compass, Lawson argues that Labour’s electoral failures are not the fault of the Corbynites nor the Blairites but a result of social democracy’s worldwide crisis.

“Nowhere are social democrats ideologically, programmatically or organisationally on the front foot,” writes Lawson. “The crisis isn’t cyclical but existential, rooted in profound cultural and technological shifts that scorch the earth for all social democratic parties.

“Social democracy, the belief that one party, in one nation, largely through the state can create a settlement that favours the interest of labour over capital, is dying as a political practice. It is set to join the ranks of ‘communism’ as a political term of only historic relevance.”

The irony, claims Lawson, is that “a world that is both social and democratic is more urgently needed than ever”.

However, he argues, social democracy’s past rise was “a temporary blip made possible by a particular alignment of forces after the Second World War”, and it is now ill-equipped to face the four challenges of a 21st century of “openness, flatness and connectivity”:

“If Keir or Keira Hardie were to create a party today to make the 21st century both social and democratic it would look nothing like the Labour Party,” concludes Lawson. “Can Labour and other social democratic parties change? Or will they be replaced? On the one hand the omens aren’t good. The tribalism and the arrogance of Labour runs deep. But then organisations can reinvent themselves.

“But this time it’s more than a switch back to Blairites or the continuation of Corbynism that is required – it is a cultural leap into the 21st century. It could be an amazing world of connectivity, solidarity and abundance – a new dawn and a new Golden Age; social democracy not for the people but by the people. Will social democrats understand the spirit of these new times and be part of it?”

Compass are calling for people to contribute to the debate by commenting on their blog or emailing Neal Lawson directly – neal@compassonline.org.uk.

Compass have also announced a new project on a universal basic income to be launched by the authors of a new report, Howard Reed and Stewart Lansley, with Ursula Huws and Labour MP Jonnie Reynold, at 7pm on Monday 6 June in the House of Commons. Sign up here to book a place.

More about Compass is here.