The role of ILP volunteers in the Spanish Civil War will be remembered at an event at the Working Class Movement Library in Salford on Saturday 24 September. 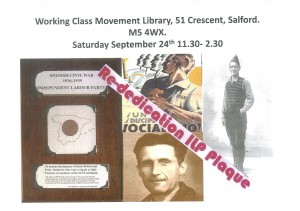 A plaque at the library commemorating their contribution and sacrifice will be re-dedicated to the volunteers in the presence of George Orwell’s son, Richard, and Quentin Kopp, the son of Orwell’s commander in Spain.

The plaque was originally unveiled in May 2009. A new sculpture of ILP volunteer Bob Smillie, who died in Spain, made by Frank Casey, will also be on display.

The event to re-dedicate the plaque is supported by The Orwell Society and the ILP.

Chris Hall is a trustee of the International Brigades Memorial Trust and author of ‘Not Just Orwell’: the Independent Labour Party volunteers and the Spanish Civil War (Warren and Pell, 2009) and In Spain with Orwell: George Orwell and the ILP Volunteers in the Spanish Civil War, 1936-1939, (Tippermuir Books, 2012).