The 100th anniversary of an historic mass Labour and Socialist Convention held in support of the Russian Revolution at Leeds Coliseum in 1917 will be marked at a one-day event in the same city on 3 June this year.

Some 3,500 democrats and socialists at the 1917 Convention, including nearly 300 from the ILP, pledged solidarity with the Russian Revolution and voted to set up Workers’ and Soldiers’ Councils in Britain. 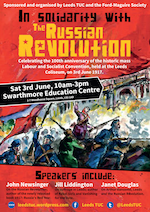 The conference was addressed by leading ILPers, such as Robert Smillie, Ramsay MacDonald and Philip Snowden, and other left-wing figures, including Tom Mann, Bertrand Russell, Sylvia Pankhurst and Charlotte Despard. You can read a transcript of the Convention here.

This year’s commemorative event has been organised by Leeds Trades Council and the Ford-Maguire Society, with support from the Lipman-Miliband Trust, and will feature speakers such as Michael Meadowcroft on the Leeds Convention, John Newsinger on the Russian Revolution, Janet Douglas on Arthur Ransome, Leeds and the Russian Revolution, and Jill Liddington on ‘Leeds Suffrage Stories: Isabella Ford, Mary Gawthorpe and Leonora Cohen’.

It will be held at the Swarthmore Centre and the conference will be followed by an evening of American folk.

What: ‘In Solidarity with the Russian Revolution’
Where: Swarthmore Education Centre, 2-7 Woodhouse Square, Leeds LS3 1AD
When: 10am-3pm, Saturday 3 June 2017