ILP Chair DAVID CONNOLLY reports on his visit to Catalonia last year to mark the 80th anniversary of George Orwell’s involvement in the Spanish Civil War.

George Orwell’s Homage to Catalonia is one of the great books of political literature of the 20th century. It records his time in Spain as a volunteer with the ILP in the first half of 1937, his training at the Lenin Barracks in Barcelona, the boredom and dangers of life in the trenches on the Aragon Front, the political and social upheaval in Catalonia, the exhilaration of the workers’ takeover of large sections of the economy, the repression of the ILP’s sister party POUM by the government during the May Days and his somewhat fraught escape to France, eventually returning to what he calls in the last page of the book, ‘the deep, deep sleep of England’.

It was therefore a privilege for my wife Kath and I to join members of the Orwell Society on a visit to Catalonia in May of last year to mark the 80th anniversary of Orwell’s time there. The visit was organised by his adopted son, Richard Blair, and Quentin Kopp, son of the remarkable POUM commander, Georges Kopp. The tour party of 15 included Jonathan Krehm from Canada, whose father William was a writer for the POUM international newsletter Spanish Revolution and is the last living north American who went to Spain to support the Republic. 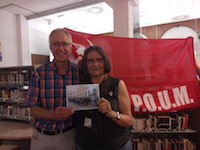 Our first port of call on Wednesday 17 May was the Sanatorium Maurin on the outskirts of the Barcelona with a great view of the city. Named after the POUM leader, Joaquim Maurin, who was captured by Franco’s forces in Galicia at the start of the revolt in July 1936, it is the place where Orwell convalesced from the wound in his neck when he was shot near Huesca.

Now an educational institution run by the Benjamin Franklin International School, we received a warm welcome from students, staff and parents and it was a great pleasure to meet Aurelia Quinto Aznar (pictured with me, above), daughter of Aurelio Quinto, the POUM military officer who trained Orwell, Staff Cottman and other ILPers at the Lenin Barracks in January 1937. Aurelio, who Orwell called ‘Lieutenant’, had been a Major in the Tercio de Regulares de Africa, a post he left to fight for his ideals in Catalonia.

The centrepiece of the next day was a guided tour of civil war sites in central Barcelona with Nick Lloyd, author of Forgotten Places: Barcelona and the Spanish Civil War. This included a visit to the Poliorama on Las Ramblas where Orwell was posted as a sentry during the May Days, directly opposite the Café Moka where Government Assault Guards were confronted by Georges Kopp and his men in a remarkably friendly manner, given the prevailing political atmosphere in the city at the time. Nick’s knowledge of Barcelona and his detailed understanding of the politics of the war made for a fascinating four hours. 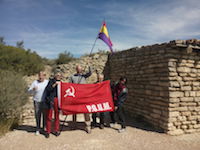 Friday saw us following the route that Orwell took into the Sierra d’Alcubierre, arriving at the Francoist position on Monte San Simon on the Aragon Front. Our guides, Victor Pardo Lancina and Elena Torralba, told us that a silent midnight attack by POUM militia had killed 60 of Franco’s army at this site and that until recently fascists had held an annual rally there, a place they regarded as a shrine.

The next day we toured the restored trenches in Monte Irazo (pictured above), where Orwell first fought in the Sierra, meeting with Republican historians who have made it their job to educate their fellow citizens about the Civil War in this area. With the Mayor of Alcubierre we visited their local exhibition and were treated to a very generous meal by the owners of La Granja, once a farm where Orwell had seen ‘rats as big as cats’.

On our final day we travelled to Huesca, a strategically important town besieged, but never fully encircled, by the Republican armies, which meant it remained in fascist hands throughout the war. We looked down from the restored POUM trenches and wondered what might have been.

After refreshments and a meeting with the Mayor of the nearby village of Tierz, we visited the ‘Orwell has coffee in Huesca’ exhibition. This outstanding display of documents, photographs and artefacts had been curated by Victor over many years with help from the Orwell Society and the Orwell Archive, and includes a number of references to the ILP. 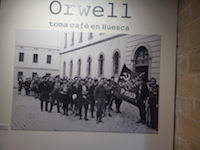 Looking at the photograph of volunteers training at the Lenin Barracks, we were able to identify the 16-year-old Staff Cottman (three from the back in the picture, in front of the tall Orwell). The exhibition’s title refers to a remark made by a Republican general on the eve of an attack on the town, that the next day his soldiers would be ‘drinking coffee in Huesca’. Of course, they never did.

After an enjoyable and busy five days, during which we gave out many ILP badges as well as copies of Barry Winter’s Land and Freedom, there was time for a final get-together before we returned to a general election in England that turned out to be anything but ‘sleepy’.

More photos from David’s trip to Catalonia are here.

You can find out more about the Orwell Society here.

Click here to read David Connolly’s ‘The ILP, POUM and the May Days of the Spanish Civil War’.

Land and Freedom is available to buy for £4 from our Publications page.