Behind the leadership of Emmeline Pankhurst were many lesser-known figures in the Votes for Women campaign in the north of England, some of them members of the ILP. ANTONIA CHARLESWORTH remembers their contribution to the fight for women’s suffrage and profiles one Lancashire ILPer who played her part.

Manchester’s place in the history of the women’s suffrage movement will be cast in bronze when Hazel Reeves unveils her statue of Emmeline Pankhurst in St Peter’s Square next year.

Born in Moss Side in 1858, Pankhurst and her Women’s Social and Political Union (WSPU) – the leading organisation of militant suffragettes – have become synonymous with the Edwardian Votes for Women campaign. But behind the headlines women across industrial Lancashire and the rest of the north also came together to campaign for votes for women.

In 1901 over 29,000 Lancashire mill workers signed a petition for women’s suffrage and inspired the formation of the WSPU in 1903. Many of those working-class women became members but the organisation was accused of campaigning not for “votes for women, but votes for ladies”. Since it only granted women the right to vote on the same terms as men – if they were over 30 or owned property – many working-class women remained disenfranchised after the passing of the Representation of the People Act of 1918.

In 1904 Rochdale tailor and suffrage campaigner Ada Nield Chew became involved in correspondence with Christabel Pankhurst on the pages of the Clarion, illustrating the conflict working-class socialist women faced in joining the campaign. “To give wealthy women a vote would mean that they, voting naturally in their own interests, would help to swamp the vote of the enlightened working man, who is trying to get Labour men into Parliament,” wrote Chew.

The stories of these suffragists, who preferred the constitutional tactics of Millicent Fawcett’s National Union of Women’s Suffrage Societies (NUWSS) over the militant approach of the WSPU, are less sensational and therefore less often told, but they were no less radical and no less vital.

Nor were actions on the other side of the Pennines. Yorkshire woman Mary Smith is credited as the first to petition Parliament for the female vote in 1832. She said she paid taxes and was subject to the rule of law, and therefore did not see why she should not vote, but was laughed out of the House of Commons.

In 1902 Yorkshire textile workers delivered their suffrage petition to Westminster and notable early campaigns developed in Halifax and Huddersfield. In the latter, a branch of the WSPU was formed by 50 local women and detailed notes and minutes kept by secretary and organiser Edith Key have shed much light on branch activities – both legal and illegal.

Key began operating a safe house for fugitive suffragette ‘mice’, evading prison under the Cat and Mouse Act. It is heroic acts of defiance like Key’s that are the defining landmarks of the Yorkshire road to women’s suffrage.

At age 11 Selina Cooper began working part time in Lancashire cotton mills following the death of her father. By age 36 she was an experienced weaver, earning almost equal pay to her male colleagues but, like the quarter of a million other Lancashire women working in mills, she remained disenfranchised. 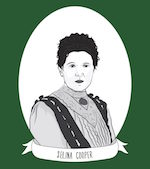 Before becoming engaged in the campaign for suffrage, Cooper was politically active as a member of the Independent Labour Party (ILP) and the Social Democratic Federation. She married a socialist and in 1898 helped form the Brierfield Women’s Co-operative Guild and became its first president.

In 1900, aged 36, she became involved with garnering signatures for the suffrage petition organised by Eva Gore-Booth and Esther Roper, and in 1901 Cooper was one of 15 cotton workers who marched the giant petition containing 29,359 Lancashire women’s signatures down to Parliament.

The same year she became the first woman to represent the ILP when she was elected as a Poor Law Guardian. But by 1903 there had been little progress towards women’s suffrage so Cooper, Gore-Booth, Roper and others formed the Lancashire Women Textile Workers’ Representation Committee – preceding the WSPU. These radical suffragists disapproved of the “educated and upper class women who kick, shriek, bite and spit”, as Gore-Booth wrote.

In 1905 Cooper gave a speech at the Labour Party conference and urged the leadership to fully support women’s suffrage, in 1906 she helped form the Nelson and District Suffrage Society and in 1907, despite having two small children (a third died in infancy), she became a full-time organiser and campaigner for the NUWSS. In 1910 she was one of four women chosen to present the case for suffrage to prime minister Herbert Asquith.

Many thanks to Big Issue North where a longer version of this article was orginally published.