Jeremy Corbyn’s appeal to young people has dispelled a few myths about their political apathy and disengagement. SAFFRON ROSE reviews a new book that looks at the lives of young people in Britain today and considers why the Labour leader has been such an inspiring figure.

As a young, Labour-voting, Corbyn-supporting, politically active university graduate, I do not feel that I was the target audience for Liam Young’s debut political memoir, Rise: How Jeremy Corbyn inspired the young to create a new socialism. Yet, the narrative echoes conversations my friends and I have on a daily basis. 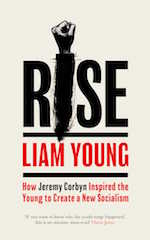 For too long ‘the young’ have been dismissed as lazy and unengaged with the world around them. There is a common misconception that young people only seem to care about tuition fees. But Young has dispelled this myth by providing evidence of our concerns about the environment, housing, stable employment and the impact Brexit is set to have on the nation.

The book focuses mainly on the snap 2017 general election, the policies of the political parties and the effect they would have on youth. It includes testimonials from numerous young party members and touches on the issues that concern them, such as the growing mental health crisis among young people and the lack of resources and support available due to NHS cuts.

It talks about the rise of zero hour contracts and their effect on young people’s mental health, supported by a study from UCL’s Institute of Education which found that “25-year-olds [are] employed on contracts that do not guarantee a minimum number of work hours and were 41% less likely to report having good physical health compared with those on secure contracts”.

Young people face a double-edged sword – we’re belittled for not being able to obtain full-time employment and constantly shafted by government policies, such as David Cameron’s proposal to scrap housing benefit for under-25s. Yet, if we’re fortunate enough to have a job we’re paid abysmal wages due to our age. Meanwhile, I’ve yet to meet a landlord or utility company that will charge an under 25-year-old less for the same reason … funny that.

There has also been a rise in unpaid internships, which act as a class barrier, offering opportunities only to those who can work for free and live in London where you’ll be spending more than £1,000 per month to survive (according to a Sutton Trust Report).

Young also explores the ‘generation rent’ phenomenon, whereby almost half of all private renters are aged between 16 and 34. He points out that the Conservatives blocked a Bill (The Homes [Fitness for Human Habitation] Bill) which would have protected tenants and ensured they could live in habitable homes. Instead, young private renters currently pay obscene rents for rooms with mould, damp and dodgy electrics, and are often denied the ‘luxury’ of a living room because landlords have turned them into money-generating bedrooms.

Young cites a Citizens Advice Bureau report estimating that private landlords take £5.6 billion in rent on homes that fail to meet legal standards and that more than 700,000 families in England live in homes which severely affect their health. He informs us that Shelter estimates there are more than 250,000 people in rented accommodation that is not fit for human habitation.

Meanwhile, some 39% of Conservative MPs are landlords themselves. As Laura Pidcock, Labour’s MP for North West Durham, said: “Of course they won’t vote for further protections for people in their homes and will try to get away with as little regulation as possible, as they perceive that this will affect their profits.”

The idea of owning a home is out of reach for so many young people due to the staggering costs of deposits alone. The ‘Bank of Mum and Dad’ is a privilege many of us do not have, and all too often it is impossible to save up for a five or 10% deposit while paying rent.

According to the Institute for Fiscal Studies, average house prices have grown about seven times faster than the average incomes of young adults over the last 20 years, meaning there’s little chance for young people not lucky enough to have parents with savings, or who are willing to re-mortgage their houses or downsize. Financial service group Legal & General predict that the cash injection from parents to their children will amount to £5.7 billion pounds in 2018 with 316,600 young people relying on the generosity of their parents and family members.

Overall, Rise is an informative read if you want to understand the so-called ‘youth surge’ within politics following Corbyn’s leadership election.

Do I believe this is a ‘new socialism’, however? No, I do not. I think young people have always cared about the political system, no matter how little the we’re told otherwise, and for the first time we now have a leader who is willing to put issues that concern future generations at the forefront of his party’s agenda.

We saw this in Labour’s 2017 general election manifesto which promised Help to Buy funding, to ban letting agency fees and to introduce legal minimum standards to ensure houses are fit for human habitation. The manifesto also included a 20-point plan for security and equality at work and touched on banning unpaid internships, raising the minimum wage to a living wage and banning zero hour contracts.

Rise gives us an in-depth view of how Corbyn’s Labour Party has offered hope to the young and inspired us to go out and attempt to shake-up the political climate. Long may it last.

Saffron Rose is a former politics student at Leeds Metropolitan University and now works for a students’ union in Yorkshire.

Rise: How Jeremy Corbyn inspired the young to create a new socialism, by Liam Young, (2018), is published by Simon & Schuster and available for £12.99.