BARBARA HARGREAVES pays tribute to her father, an ILPer from Blackburn who dedicated his life to ‘every progressive cause that arose’.

Johnnie Duxbury was born in Blackburn on the 9 December 1907 and died there on the 28 October 1993. He left school at 14 and was the fourth generation of his family to become a skilled shuttlemaker. 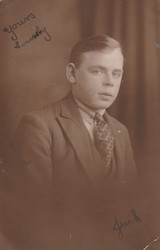 His father, Albert Duxbury, served on the executive committee of the Society of Shuttlemakers from 1911 and was president from 1936 to 1946. He was awarded the British Empire Medal in 1952 in recognition of his work in the shuttle trade and with the trade union.

The decline of the textile industry forced Johnnie (pictured left, aged 20) to seek more secure employment, first with Blackburn transport department, then as a caretaker for Blackburn council, and finally as a part-time porter at Blackburn Royal Infirmary. He was made redundant when he was 75 years old.

Throughout these changes, Johnnie remained committed to the cause of socialism and became a member of the ILP. He was involved in many of the protests of the day, most notably, perhaps, the Kinder Scout trespass in 1932, as well as the peace movement and resistance to Oswald Mosley, who had established a branch of the British Union of Fascists in Blackburn during his Lancashire recruiting campaign in 1934/35.

My dad told me that he and his ILP friends from would attend Mosley’s meetings handing out anti-fascist leaflets and heckling him with pertinent questions that he couldn’t answer. Often they were chased by the Blackshirts through the streets and alleyways of Blackburn. After these meetings, he and his ILP friends would go around erasing the BUF’s antisemitic graffiti from pavements and walls.

Over nearly 86 years Johnnie supported every progressive cause that arose and was always on the side of the underdog. In his younger years he loved walking and cycling with like-minded supporters of the Clarion Club – they called themselves ‘socialists on bikes’. 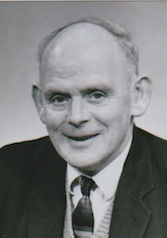 The curse of unemployment was probably his pet subject and he felt for young families as more and more redundancies were announced. He was distressed for the poor, the homeless, the aimless, the unemployed youth, the dole and its stigma.

Johnnie (left, at 75) was a life-long student in the autodidact tradition. He read the classics, the progressive writers of the 1930s, ’40s and ’50s, and learned Esperanto in the hope that common peoples of the world would be better able to advocate for equality, social justice and peace.

His intelligence and integrity allowed him to transcend his circumstances and help those who could not, through good fellowship and because of a dignified sense of decency. These were values that gained him honour in Blackburn.

Barbara Hargreaves is the proud daughter of Johnnie Duxbury.

She is helping Roger Smalley with his research into Johnnie’s life and the work of Blackburn ILP in opposing fascism in the 1930s. They are appealing for anyone who has information or access to old Blackburn ILP minutes to get in touch via: barbsandmike@gmail.com.

We hope to publish a longer article on the life of Johnnie Duxbury and his Blackburn ILP comrades in the near future.