Roma Marquez Santo, the POUM veteran who unveiled a plaque to the ILP’s Spanish Civil War volunteers in Salford in May 2009, died in Barcelona on Wednesday 29 December 2010. CHRIS HALL recalls his life and the events that shaped it. 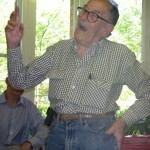 Roma Marquez Santo born in Barcelona on 6 November 1916 into a political family who owned a variety of books including some by Russian authors. One of six children, he began work at a garage and became a member of the socialist trade union, the UGT.

When the Spanish Civil War broke out in July 1936 he received a rifle from a loyal artillery regiment and, together with two brothers, went on to to join the militia of the POUM. His youngest brother, aged 14, ended up fighting in the defence of Madrid in November 1936 while Roma became part of the POUM Lenin column (29th Division) and joined the POUM political party. One of his sisters took part in the failed attack on Majorca by Catalan militias in 1936.

The three brothers volunteered to man four 50mm mortars, and during an engagement in September 1936 Roma was wounded in the leg and evacuated to Barcelona. There he witnessed the funeral of the anarchist militant Durutti on 23 November before returning to the Aragon front in late December 1936.

Roma remembered two incidents in partiuclar from his time in the Lenin Column: one was seeing a very fat George Kopp riding a white horse plastered in mud; the other was when he helped evacuate his section commander’s family from their farmhouse as it came under fire. Roma carried a rather large and hysterical 14-year-old girl across a river, and later met up with this same girl in 2009 more than 70 years later. (Read more)

In August 1937 Roma and one of his brothers joined an anarchist unit, after the POUM had been declared an illegal political party and the Lenin column forcibly disbanded.

They both attended officer training school and became lieutenants in the republican army. Roma was assigned to the 147th Mixed Brigade based in Andalucia, and when the war ended he was trapped in the south of Spain before being imprisoned as a “dangerous Marxist”.

Roma spent over three and a half years in prison before being released in the winter of 1943. On returning to Barcelona he became a builder and had to report often to the local police. He never married.

In later life he visited the UK and Ireland and met British International Brigaders to talk about his experiences of the civil war. In May 2009 he came to Salford and unveiled a plaque honouring the contribution of ILP volunteers in the Spanish Civil War.

Roma died from cancer in Barcelona on 29 December 2010. He will be sadly missed by all who met him.

Chris Hall is author of ‘Not Just Orwell’: The Independent Labour Party Volunteers and the Spanish Civil War, published by Warren and Pell, May 2009.

A Tribute to Roma 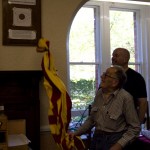 On 30 May 2009 Roma came to the Working Class Movement Library in Salford to unveil the first ever public commemoration of ILPers who fought in Spain. Read more

Land and Freedom, written by Barry Winter, is the ILP’s account of the of the Spanish Civil War, using the often-silenced voices of Spanish activists.