Local resident MATTHEW BROWN sifts through the context and consequences of the riots which erupted on Hackney’s streets and estates on 8 August.

The sound of helicopters is not uncommon over our part of east London. So it took a few minutes before we realised the whirring noise above our house on Monday afternoon was not just another Olympic Park surveillance chopper, nor the buzz of an air ambulance heading south over the Lea Valley towards Whitechapel and the Royal London Hospital.

This one was closer; hovering. Then a second arrived. It hovered too, almost overhead. “Something’s happening,” one of us said.

BBC News showed us what. Bird’s eye shots from one of those choppers revealed a familiar scene turned grotesque. Hackney’s main thoroughfare, less than a mile away, was strewn with police vans, stranded buses, rampaging young men, and thin lines of riot police.

Mare Street and the Narrow Way form the focus of local shopping in this part of the borough, the ‘heart of Hackney’ as the council try to brand it, streets now famous nationwide thanks to rolling footage of what was soon labelled ‘day three of the London riots’.

As Monday afternoon wore into evening, the helicopters’ hum grew closer still and a faint smell of burning drifted over the back garden fence. Some of the trouble pushed south towards London Fields and Bethnal Green; but most moved north to the Pembury estate just half a mile from us.

We wondered if it would all tumble our way en route to the council estate at the bottom of our road. The local high street was eerily quiet – shops which never close closed early, their shutters down and pavement wares dragged in for the night. Many residents moved their cars from the parking bays. Chatsworth Road has never been so empty, not even on Christmas day.

Thankfully, the immediate area survived the night’s violence largely unscathed, bar an early morning break-in at the local pub. But up on the Pembury young people were burning cars and trash bins, raiding shops and conducting running battles with mounted police and dogs.

Bigger fires soon burned in other parts of the capital, destroying properties in Croydon, Clapham and Peckham, while more extreme looting and mugging spread right across London that night, and then on to other cities.

Like millions of others we watched it all in astonishment and horror, trying to make sense. At 9.30 the next morning, we joined some 200 local people who’d answered Twitter feeds and internet calls to meet outside the town hall on Mare Street to help clear the aftermath. 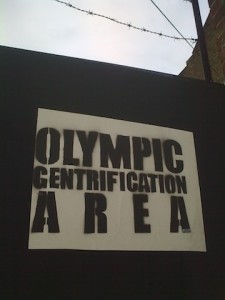 Armed with brooms and bin bags, dust pans and brushes, this was David Cameron’s ‘big society’ in action, volunteers out to do our bit for our community … only to find the big state had got there first!

The local state, anyway – council workers had been out since 3am and virtually cleared the mess by 7.30. On Mare Street, bar a few cracked windows, some boarded shops, and an edgy sense of unease, you might not have known anything much had happened. Buses and cars were moving freely, many businesses re-opened early.

“Haven’t the council done a fantastic job?” people exclaimed, almost in disbelief, some clad in ‘I love Hackney’ badges and t-shirts.

Here was a group encapsulating another side of Hackney: racially mixed, but mostly white; some young, but mostly middle aged; not all, but mostly middle class (in the common sense of the term, at least). Many, no doubt, are feeling the pinch themselves, part of Ed Miliband’s infamous ‘squeezed middle’.

Reporters moved among us, trying to gauge reaction, finding a confusion of outrage, revulsion and bemusement, people struggling to understand.

Not that there aren’t divides and differences, tensions and inequality, as the riots showed. Those doing the rioting are not in the squeezed middle; more at the crushed bottom.

Clearly, much of their anger is directed at police whose use of various dispersal orders and other anti-social behaviour tactics has been widespread on many estates in recent years, and reports suggest it was a mishandled stop and search that triggered the first wave of trouble close to Hackney Central. Just a week earlier, 300 officers had raided the Pembury estate for drugs and weapons. “We’re taking our estate back,” yelled one of the rioters.

But there’s a wider sense of resentment too, a feeling of disempowerment that is easy to miss if you spend your time laptopping in pavement cafes, opening pop-up galleries and delicatessens, or making arty films in one of the various farmers’ markets that have grown up, not quite organically, all over the borough over the last half a decade or so.

The area’s gone through huge changes in recent years, transformations that few local people have any say in, certainly not those identified by Kidscape’s Camilla Batmanghelidjh this week as the “ignored underclass”. Their estates now sit cheek-by-jowl with rapidly gentrifying rows of privately-owned town houses, modern blocks of what were once called ‘yuppie flats’, and converted factories branded as luxury apartments.

To some this is regeneration, while others call it gentrification. But the lived experience for some on the excluded margins is to find the streets and parks, pubs and squares where they once felt at home, had a sense of ownership if not control, virtually colonised by what an older man from the Pembury called “newcomers”.

“I’ve lived here for 43 years and it doesn’t feel like my home anymore,” he told 5 Live.

In the 15 years I’ve been here, the changes have been dramatic. Many community facilities have gone, including two clubs once famous as homes to black music, both replaced by private housing blocks beyond the pockets of many local people. Small, local businesses have been forced to close as new owners and developers bought leases from the local authority and pushed up rents. House prices have rocketed.

But there are enough people with enough money (more and more, in fact, as the area becomes increasingly desirable in estate agents’ terms) for trendy shops and cafes to flourish.

Much of this is welcome, of course it is. Hackney has long been one of the poorest boroughs in the country, if not in Europe, as well as one of the most vibrant and creative, famous for its artists’ communities, its writers and community theatre.

But it’s increasingly difficult for many people to afford to live here. The appearance of each new overpriced restaurant or block of flats signals a change in its social make-up that most of us have no control over, and many can’t afford to enjoy.

If this is regeneration, it’s happening according to what one local youth worker called ‘the walking wallets theory’, whereby local authorities and developers create an environment that attracts more people with more income, so altering the social fabric by changing the population, rather than working long-term, at grassroots and in extremely difficult circumstances with the current population who are trying to change their lives.

It’s essentially a market-driven process, and change steered by market forces leaves us all feeling disenfranchised sometimes. But imagine if you grew up on the local estate with no means – economic, cultural or social – of being part of, let alone influencing or benefiting from the changes on your doorstep.

Throw into the mix an Olympic Games costing billions of pounds just down the road, a corporate affair which you were told was there for you, but in reality you have no say or stake in, and won’t be involved in. Then add the current economic and political environment which means jobs are unlikely, education unaffordable, and social security disappearing.

Of course, the Tories steadfastly refuse to countenance any connection between public spending cuts and the riots, as Michael Gove demonstrated so graphically (and comically) with his red-faced response to Harriet Harman on Tuesday’s Newsnight. But it can’t be insignificant that some youth services in Hackney have been cut by 75 per cent. In Haringey, home borough of the Tottenham riots two days earlier, eight of 11 youth centres have closed.

As ever, right wing politicians point their quivering fingers at the usual suspects – lack of discipline in families and schools; a failure of the liberal state. “It’s sheer criminality,” repeats Theresa May, over and over, insisting that any other explanation is just an excuse. “Over the last 20-30 years we’ve allowed young people an endless sense of entitlement,” bumbles London Mayor Boris Johnson to the BBC.

But values and education don’t just reside in families and schools. They come from our culture, and our social economy. The society we’ve created over the last 30 years rewards selfishness, and teaches us to value what we have and what we own, what we can get for ourselves, over all.

We live in what one radio punter, a social worker, called “a consumerist, avaricious culture”; it’s “a culture of instant gratification with an ethos of grab what you can by any means”, as another put it. After all, that’s what MPs have done with their expenses; bankers with their bonuses; tax-evading corporations, bribed police, and phone-hacking media.

Of course, there are no straight lines connecting any of this, and none of these factors, either singly or combined, provide an explanation in any simplistic cause-and-effect sense. But to suggest this context shouldn’t be part of the picture is wilful political blindness; and to insist it should be is not to offer an excuse for anyone’s behaviour, despite what our hapless home secretary might think.

Back on Mare Street, many shops closed early on Tuesday afternoon as a quiet, tense atmosphere settled over Hackney’s heart. Police, some apparently drafted in from Wales, stood guard outside the town hall. Officers in high visibility jackets walked up and down Clarence Road, scene of the worst of Monday’s trouble.

Rumours circulated that Chatsworth Road would be targeted next. But they were just rumours. We dropped in at the pub to offer support to the landlady and found her retelling the tale of how she’d chased off her intruders, swearing and cursing and hurling plant pots after them.

“I didn’t want to throw anything too valuable,” she laughed, exhausted by her sleepless night. “They grabbed a couple of bottles but not much. They were just kids heading home, taking their chances.

“I’m a bit worried about tonight, though,” she added. “We don’t have shutters here. I might have to stay up again.”

Thankfully, no helicopters hovered above us on Tuesday night, and we fell asleep to the distant whines of police sirens. But that’s not uncommon in this part of east London either.