Throughout the turbulence of the past century, the ILP has been firmly committed to the idea of equality and common humanity of all peoples. In particular, it has sought the unity of working people and opposed attempts to divide them whether by race or by nationality.

Many cherished the hope that this internationalism would make war impossible. They were to be disappointed.

In times of war, when jingoism was rife, the ILP’s anti-war views made it very unpopular. When Britain took up arms against the Boer republics in South Africa in 1899, the ILP opposed the government and popular opinion. They faced bitter criticism and even physical assault.

But this was nothing compared with the hostility towards ILPers at the onset of the First World War in 1914. The conflict, which led to the death of a generation of young men from Britain, Germany, France, Italy, Russia, Turkey, and many from the colonies, was begun with great enthusiasm.

The ILP called for solidarity “across the roar of guns” with their anti-war comrades in Germany. Many thousands of ILPers were jailed for refusing to serve in the armed forces. The ILP was involved in mass campaigns against conscription, attracting many idealistic young men and women appalled by the slaughter. After the war ILPers were active in campaigns against the international arms trade, like War Resisters International.

The ILP also supported national movements in the British Empire, particularly in India and Africa, struggling first for self-government and later for independence. 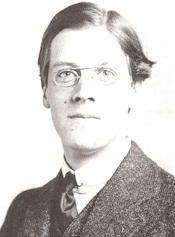 Leading ILPers, from Keir Hardie in one generation to Fenner Brockway in the next, travelled abroad and exposed the effects of the empire on the colonial working class. The ILP also maintained a stream of criticism against the injustices and exploitation of British rule.

As a result, some black activist found their way into British politics through the ILP. From India came Shapirji Saklatvala, was to join the Communist Party in 1921 and became the Communist member of parliament for Battersea North in 1924. Later from Trinidad came the author and sports writer CLR James, who for a time became a Trotskyist.

The most authoritative black activists in the inter-war years was George Padmore, also from Trinidad. After his disaffection with the Communist movement in which he had played a key role, he established a close relationship with ILP, writing a regular column for its weekly newspaper. The ILP also provided offices and publicity for his influential International African Services Bureau.

Although the ILP has had a long tradition of opposing war, including the Second World War, it was not rigidly pacifist. So when civil war broke out in Spain in 1936 after the fascists rebelled against the republican government, the ILP sent a small contingent to fight alongside its fellow socialists in Catalonia. 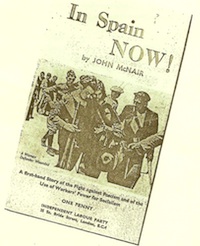 One of those volunteers was to find fame as the writer George Orwell. His account of the war and revolution shows the sharpening divisions between communists and others on the left. These divisions also showed themselves when the ILP opposed the Moscow show trials and purges against former Bolsheviks.

One occasion where the left was able to unite was in the Battle of Cable Street in 1936. The British Union of Fascists declared that it would march through London’s East End, the heart of the Jewish community. The ILP and communists called on people to block the streets and thousands answered the call. The fascists were unable to proceed.

In more recent years the ILP maintained its traditions by supporting campaigns for nuclear disarmament and the anti-apartheid movement. It opposed the Vietnam War and the Gulf War. It also campaigned for major defence cuts following the end of the Cold War.

Land and Freedom, the ILP’s pamphlet on the Spanish Civil War is available here.

Read other extracts from The ILP: Past & Present here, including:
ILP History 1: The Early Years
– Great Expectations
– Beginnings in Bradford
ILP History 2: Ethical Socialism
– Independent Women
– Living for that Better Day
ILP History 3: Labour’s Rise and Disaffiliation
– Strongholds of the ILP
ILP History 4: War and After