JOHN HALSTEAD takes issue with a speech given by Labour’s Policy Review leader, which was discussed at this year’s ILP Weekend School as part of its consideration of the Party’s ‘One Nation’ project.

The ILP Weekend School at Scarborough on 4/5 May 2013 devoted a session to Jon Cruddas’s 14 February speech to the Institute of Public Policy Research’s launch of its The Condition of Britain project. We looked at the video recording of the speech alongside the written text and then went into discussion. What was our response?

The decision to devote time to the speech was not questioned. We all have good reason to be interested in ‘the condition of Britain’ and comments from the custodian of Labour’s Policy Review. But in welcoming the idea of constructive engagement, we need to be critical.

Many of us agreed with Cruddas’s point that we are living in “a time of disruption and insecurity”, and that there is “a deep and profound crisis in our economy”, which the global banking crisis has revealed as “deeply structural”. We also agreed that there is a “need to transform government” and that it should be “less top down”.

But general statements in the speech about home, family, love, care, and being “more trusting in people to get the job done”, are either of the “motherhood and apple pie” type, with which all agree, or they are vacuous. For detail, it appears as though we may have to wait on something delivered within the “fixed term route map of some 26 months” against agreed but unstated Labour policy review “deadlines”.

So what should a detailed statement contain?

It would be consistent with transforming government and making it less top down if we had a clear resolve to reverse the centralisation to Whitehall from the localities and regions that has taken place. Local councillors have become, as a result of actions under Labour as well as the Conservatives, mere ciphers for central government. If this is not reversed by the construction of regional and local entities on a devolved federal basis, all talk of being “less top down” is empty.

As to the economy, the notion that our economic crisis is deeply structural is full of clear implications. There is a need for an industrial policy that effectively rebalances the economy. This would mean clarity on policy towards banking and finance and the promotion of other industries and employment. It would be unfair to say the speech makes no contribution on these issues, but to say we are “looking at regional banks” and will help “develop community banks” and credit unions hardly goes far enough.

Industrial policy, as it is usually narrowly conceived, is not enough. Cruddas said he does not believe Britain is “broken”, but if industrial policy is not complemented by constitutional reconstruction, as already noted, and a radical attack on educational inequality and the disastrous situation facing young people, it will not be enough. Britain may not be broken but it is congenitally class-ridden and seriously dysfunctional. Our political system consistently fails to produce the kind of joined-up thinking and action that is necessary to improve our situation.

Education provides an excellent example. There is a failure to realise that successful education is, as JWB Douglas once put it, a matter of “the home and the school”. An adult education policy is required, therefore, to complement schools policy; and that should include people in work as well as out of work. Captains of industry have been complaining for years about industrial skills shortages, but they have connived in the destruction and devaluation of apprenticeships and vocational education while being supported by ingrained class attitudes in the wider society.

Government has been incapable of mapping these shortages, or of developing effective programmes to eliminate them in the areas where they actually occur. The political parties have been unable to get a grip, and have, indeed, often played a part in producing a deteriorating situation. So when Cruddas says it will be Labour policy in reviewing social security to “tackle loneliness by building social connections, learning opportunities and practical support”, does it mean that adult education will be rebuilt and expanded to reverse its ill-advised reduction to concentrate on “transferable skills”?

The reference to learning opportunities is the only mention of education in the speech. There is nothing about how to recover schools policy from the disastrous exploitation by Michael Gove of New Labour’s previous Academy programme, even though it is as plain as a pike staff that the only viable non-traditional LEA route is commitment to co-operative schools. There is no mention either of higher education, whether in helpings us “to build together a dynamic economy” or building “the resilience of local communities”.

The question of whether thinking on education is joined up, either considered as a policy area in itself, so to speak, or in its contribution to effective industrial economic rebalancing, is one thing, but there are also worrying indications in the speech that Labour is trapped by the language of its parliamentary and media opponents. 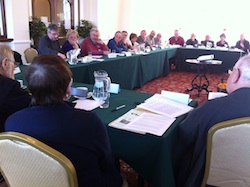 While “we’ll protect communities with stronger regulation of the private rental market”, suggesting perhaps that there will be no more shipping of housing benefit recipients from central London to Walsall, “we spend far too much on subsidising rents and far too little on dealing with the historic housing supply crisis”. One might justifiably change the tense of the verb from the present to the past to produce the mea culpa on social housing policy that Cruddas avoids, but the words could easily have come from the mouth of a Tory minister.

The statement that “we’ll protect communities with stronger regulation of the private rental market” is welcome if it means that control will be strong enough to obviate the scandal of ejection of families from London to Walsall, but while such would reduce subsidies required it would intensify the need for action increasing housing supply. But the speech is silent on measures that could create the necessary supply.

There is criticism of New Labour policy in the statement that “we can’t rely on tax credits alone to boot people’s income. There is not enough money and it subsidizes those businesses willing to make profits but not pay their workers a decent wage.” Fine, but while a “national campaigning alliance … for the living wage” and one against “loan sharks and pay day lenders” is necessary, is it sufficient? Legislation should surely be introduced to control rates charged by lenders at the same time as increasing the supply of ethical lending through the introduction of community banks and a strengthening of credit unions. Much more could and should be said. The speech is silent on policy towards banking in general.

We can evidently all agree that “the answers lie with the people themselves”, but the mantra about public policy unleashing people’s potential and encouraging “their capacity for innovation” is strong on aspiration but weak on detail.

Of course brilliant examples can be found, such as Dagenham’s local Police and Community Boxing Club, but there is no discussion of the difficulties social enterprises face in forced competition with profit-making companies, or any comment on the scandal of the latter’s involvement in social care. As the Southern Cross affair illustrated, managers of profit-making companies are incentivised to take actions inimical to delivery of quality care.

Cruddas too readily assumes that the Conservative Big Society notion has disappeared since the financial crisis “dealt it a mortal blow”. Why then, is Francis Maude, at the Cabinet Office, still promoting Public Service Mutuals, and is their governance and practice in accordance with the co-operative values that would really create a proper “working together for the common good [which] is the way to create a new and inspiring sense of national identity”?

Of course, this was a politician’s speech intended to raise questions more than provide answers on questions of detail. Indeed, Cruddas started the speech by noting the influence that the 1994 Commission on Social Justice report had on the following New Labour government of 1997. By implication, The Condition of Britain exercise will help the party in the same way.

But doesn’t this also illustrate a problem? That Labour’s Westminster mindset is to ask a think tank to produce answers to detailed questions? These will then become policy and be implemented after a successful general election. How very top-down and even democratic centralist.

See also: ‘The Condition of Britain: The Debate Goes On’ by Ernie Jacques; and ‘The Need for Engagement’ by Matthew Brown.

A report of the ILP’s 2013 Weekend School, and links to speeches at the round table event, can be found here.

Jon Cruddas’s speech to the IPPR can be read here.