A new book about the ideas behind Ed Miliband’s ‘one nation Labour’ was launched at the Labour Party conference in Brighton last weekend and is now available to buy or download from the Labour website. 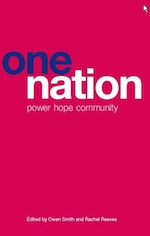 One Nation: Power, Hope, Community, edited by shadow cabinet members Rachel Reeves and Owen Smith, includes contributions from 11 of Labour’s 2010 intake of MPs writing about what Miliband’s marquee idea means to them.

Smith, the shadow Welsh secretary, writes: “Collectivism has been trumped by consumerism, common responsibilities by individual rights. Belief in our mission is dwindling… Very local campaigns – the Friends of the Park – can seem more realistic and rewarding than the great causes they have tended to supplant.”

But, he adds, lines of communication between such local groups and politics have to be restored, while at the national stage “one nation Labour will have to show a new ambition and bend markets to the people’s will”.

Hunt, the MP for Stoke-on-Trent Central, argues: “Globalisation has created a sense of loss and of dislocation amongst our communities. The last Labour government sometimes appeared to belittle the concerns of those who were fearful of the pace of change, or longed for stability or order.”

Labour needs to tackle the sources of inequality in UK markets, says Hunt. “Bluntly we redistribute more, but the underlying structure of our economy is more unequal and unfair.” In future the government will “require less flashy new ways to spend money”, such as tax credits, but instead smart interventions to change the way the market works.

One Nation: Power, Hope, Community, edited by Rachel Reeves and Owen Smith, is published by the Labour Party. £12 to buy, or £8 to Party members.