Chancellor George Osborne announced yet another back-to-work scheme at the Conservative Party conference this week. ERNIE JACQUES has seen it all before and knows where it will end: in misery for some, in riches for others, but with few new jobs.

Workfare time again. Back to the days of the workhouse as if the Victorians hadn’t done it all in the past. This rotten policy is routinely taken out, given a modern day spin and sold to the British people as the answer to their economic and social ills. 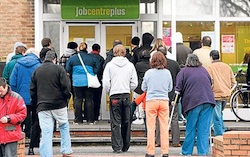 It’s the same old story with George Osborne’s new £300 million ‘help to work’ programme – make the poor pay for being unemployed as if it’s their fault for being restructured, outsourced, made redundant, forced onto the dole, forgotten about and parked in deprived neighbourhoods for years on end.

Osborne announced at the Conservative Party conference that some 200,000 jobseekers who have been unemployed and claiming benefit for up to three years will have to take one of three “work pathway” options:

Of course, Osborne got resounding applause at the Conservative conference and praise in the Tory press. But we know, after decades of workfare schemes in the UK and abroad, that they never work as intended, are never on budget, and when things go wrong, as they invariably do, the politicians will spin the message and massage the figures.

Just as other ministers have done before, welfare and pensions secretary Iain Duncan Smith, who devised rthe scheme, will excuse those who will make money off the backs of the unemployed and turn a blind eye when training providers and employers start to mercilessly exploit the jobless and jobseekers for their own personal gain.

As an unemployed engineer, and victim of Margaret Thatcher’s economic miracle, I was on the famous 1983 ‘People’s March for Jobs’. It didn’t get us anywhere. When it comes to job schemes I’ve ‘been there, done that, got the t-shirt’.

Workfare might play well at the Tory conference, and even in large parts of the country where people have been persuaded by the ‘workers verses shirkers’ spin, but when the state calls the unemployed feckless, and bullies them into slave labour schemes, it will cost a fortune and go nowhere.

By the time that is understood the damage will be done and millions, if not billions, will have been wasted, while those responsible will be long gone, usually to the House of Lords, the City and the welcoming arms of big business.

This former engineer is old enough to remember Thatcher’s make-work schemes, such as the Youth Opportunity Scheme and the Youth Training Scheme, which were followed by Labour’s New Deal and Flexible New Deal, then by Duncan Smith’s Mandatory Work Activity scheme. Make-work programmes have cost hundreds of millions and achieved very little apart from making a few people rich and destroying the hopes and aspirations of millions of working people and socially-excluded UK citizens.

Experience tells us that Osborne’s new scheme will be an unmanageable and costly mess, and do nothing to help people back into the workplace. Some of us have been saying for some time now that workfare would be the next step on from casualisation, zero hours contracts and poverty wages. Some people will make money out of the misery because that is the capitalist way, it is how an unregulated, flexible labour market works.

But it doesn’t have to be like this and, hopefully, Labour’s shadow work and pensions secretary, Liam Byrne, will rubbish the Osborne plan and show us a better, more compassionate way of helping the unemployed retrain and get back to work. That would mean taking on the forces of capital and diverting huge resources away from things like Trident and the grotesque military war machine, and from the City of London, multinational companies and tax avoiders.

My view is that we need to design first class skills training programmes and vocational educational courses to help the long-term unemployed and young working class people, with pathways into quality apprenticeships and progression into full-time jobs paying a living wage.

To do all that requires some compulsion and a big stick, but in the process it would help transform the UK economy as well as the lives and prospects of hundreds of thousands of UK citizens who have been let down and forgotten by politicians who apparently don’t give a damn.

It won’t happen, of course, because it will cost money – in the short term, at least – and employers will have to pay a decent rate for the job. And that would never do, would it Mr Osborne?

See also: ‘The Tories Poisoned Apple, mark 2’, and ‘Labour and the World of Work’, both by Ernie Jacques.