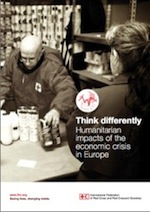 On the continent of Europe around 120 million people are living in poverty. The numbers are growing daily. The gap between the rich and poor is polarising. My fear is that sooner or later, Europe will explode in a tsunami of public disorder and chaos.

On Friday 11 October, President Hollande of France expressed his concern at the growth in popularity of right wing ideas circulating across Europe. He was commenting upon French opinion polls which put Marine Le Pen of the National Front on 24 per cent, overtaking the Socialists. From Moscow to Ulster, right wing ideologies are gaining greater currency.

Since 2008 the economies of the world have been in a state of chaos. Living standards are falling at an alarming rate. At the same time, we see the rich getting richer. The divide between rich and poor continues to grow.

According to various right wing factions, the root of our problems lie in the failure of the governments of Europe to control immigration. For the political right wing, the solution is easy. Stop all foreigners coming into your country.

Whilst I believe that our government should have been more proactive over the protection of workers’ rights, the control of gangmasters and provisions for workers accomodation and proper wage payments, there are also wider problems to tackle.

The understandable pressures on Europe’s borders are very serious. A combination of civil wars, religious persecution, drought and famine are driving the movement of thousands of people from the Middle East, Africa and beyond. In part, the fact that we have not shared our wealth has helped to create the crisis.

What I cannot understand is an apparent failure on the part of the democratic left to be critical of the capitalist system which is acting as a stimulant for the chaos facing Europe. The failure to identify capitalism as the main cause of our problems demonstrates a weakness in conducting a proper analysis of the causes of our harmful circumstances. Without knowledge of the ailments from which we suffer, we are unable to take the appropriate steps to remedy our problems.

As if the forgoing problems are not enough, on 17 October the Social Mobility and Child Poverty Commission reported to parliament that today’s middle class children are on the track to be the first in a century who will be worse off than their parents. News carried in the Observer on 13 October tells us that debt and job fears create a ‘perfect storm’. What is certain is that the problems of working people seeking employment will be compounded by them being joined by young people from the middle class. So will the demands for support from the government.

The problems we face are enormous. To see these we only have to link together the factors of Europe’s austerity, immigration problems and failing economies. But things get much worse when we add the problems of lack of housing, climate change, and the need to meet demands for food and energy for impoverished people.

Kicking issues into the long grass by just hoping that something will turn up is disastrous, but it is the way governments have been behaving. We have now reached the end of this road. Pragmatism has led us into all kinds of difficult areas which are increasingly unmanageable.

The need for democratic socialism is greater today than at any time in our history. Without it, chaos will bring down our democratic institutions. The extreme right are waiting in the wings as Hitler did. They will offer ‘order’ and an end to chaos. The fear is that if we can’t ameliorate the circumstances of people in the years ahead, people will listen to someone who offers what sounds like hope.

Think Differently: humanitarian impacts of the economic crisis in Europe was published by the Red Cross Economic Review on 10 October.

More information about the report can be found here.

Ken Curran is a member of the Sheffield School of Democratic Socialism.