A new book from Dexter Whitfield exposes how austerity policies in Europe and North America have fuelled the fire of recession rather than stimulated growth. 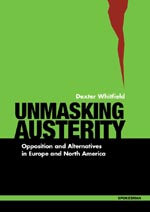 Unmasking Austerity: Opposition and Alternatives in Europe and North America identifies key lessons from anti-austerity campaigns and urges a rethink of trade union, community and social movement strategies to overcome the attacks.

It also examines the deeper causes of the financial crash and shows how some aspects the crisis have been manufactured and used to dismantle hard-earned labour rights and the welfare state.

Whitfield proposes a radical alternative strategy based on economic stimulus, reconstruction of public services, faster fundamental reform of banks and financial markets, the elimination of corporate welfare that enriches big business, and strategies to increase labour’s share of national income.

Unmasking Austerity: Opposition and Alternatives in Europe and North America, by Dexter Whitfield, is published by Spokesman Books, priced £9.99.

An eBook version is available from Spokesman here.

Dexter Whitfield is Director of the European Services Strategy Unit and Adjunct Associate Professor at the Australian Workplace Innovation and Social Research Centre, University of Adelaide.

The UK Social Policy Association gave Dexter their Award for Outstanding Contribution from a Non-Academic. This award celebrates his work in campaigning, research and advocacy for fairer UK state services over 40 years and, in particular, his defence of welfare services against privatisation and marketisation.