BARRY WINTER reviews Common Weal, the new book from the Jimmy Reid Foundation, which sets out a vision for Scotland ‘run by its people, for its people’.

“Scotland’s people are in a unique position – we have been invited to imagine our nation afresh.”

So argues Robin McAlpine in the opening sentence of his interesting and unusual book, Common Weal. In doing so, he vividly displays the enthusiasm shown by many on the Scottish left – and beyond – for the opportunities presented by the referendum. 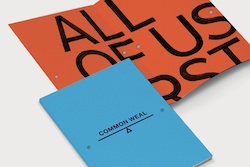 Never mind the often boorish debates between the official Yes and No camps, still less the grotesque televised duels between Alex Salmond and Alistair Darling. Here are people talking about politics, about what really matters to them – and it has become infectious.

As a letter to The Guardian puts it: “What is happening right now is that people all over Scotland are talking to each other about what is in the best interests of themselves, their children and their neighbours… The phenomenon is nothing short of sensational… In Scotland people are realising that democracy is not just an empty word, it is a state of mind – we can do this if we want to.”

Of course it is a debate that will have significant, indeed serious, consequences for Scotland and the rest of the UK. But then, that is what real politics is meant to be about.

Common Weal, meaning “wealth shared in common” and “for the well being of all”, says McAlpine, is published by the Jimmy Reid Foundation. It lucidly condenses into some 130 pages the work of 50 detailed policy reports produced for the foundation. These cover the economy, banking and taxation, poverty and inequality, work, trade, energy, welfare, and much more (and are available online). The policies advocated have been “tried and tested” elsewhere, we are told, particularly in the Nordic countries.

Never one to understate, McAlpine says: “This is arguably the biggest reimagining of a nation state in modern history.”

It certainly is impressive. For here is a message that is accessible, lively and challenging on how to reconstruct Scottish society on a just and equitable basis. Whatever one thinks about the referendum itself, the book provides a whole host of ideas in a style that sums up progressive thinking, while avoiding the jargon that many of us regularly use.

Thus, instead of talking about neo-liberalism and radical left alternatives, the author writes: “We’ve had 40 years of Me First politics – and we all came second. It’s time for a politics that puts All of Us First.” Common Weal roundly rejects what it sees as the prevailing survival-of-the-richest, winner-takes-all politics and mentalities that leave the majority of us disadvantaged.

Where I am less convinced is when the book claims that it is “not meant to be a case for or against independence but only a case for a better Scotland”. This statement could be designed to appease any of the numerous contributors to the reports who support the union. But the general thrust of the whole work shows how, as it says, “our nation can be run by its people, for its people”. By nation, it means Scotland.

Pointing this out is not meant to devalue the policies being advocated which, in most respects, could usefully be expanded to include the rest of the UK. Indeed, much of its analysis fits with the ILP’s ideas about Unbalanced Britain.

On a rough count there are perhaps a dozen references in the book criticising the unbalanced nature of the economy, democracy, the corporate media, the environment, and working lives. The policies it calls for are designed to redress those imbalances, and they merit attention.

Elsewhere, McAlpine also argues: “Scotland’s economy is badly unbalanced: it does not create anything like enough good-quality jobs in large numbers because it is unproductive – we don’t make and create things. So we need to build a genuinely productive and innovative economy.” For him, this means ceasing to favour aggressive, low-paying multinationals and instead to create alternatives. Again, the same could be applied to the rest of the UK.

Central to his argument is the claim that a “better Scotland begins with democracy”. This, he affirms, means genuine, participatory democracy. He argues strongly in favour of putting power in the hands of local communities, as well as the need for a democratic media. He is critical of what he sees as the highly centralised nature of Scottish politics, in contrast to Finland, Norway, Sweden and even Germany. Scottish democracy is neither local nor democratic, he declares.

Opposing rule by so-called ‘experts’ at the centre, he says “we have to stop being afraid of different communities making different choices”. Fair point, but we also need to build in safeguards to ensure local communities show a care for all and do not become narrowly self-serving enclaves.

Common Weal does not attempt to offer a political strategy on how to secure the policies (which are at the most progressive wing of social democracy).

This can be found it in the more explicitly leftist book, Yes: The Radical Case for Scottish Independence, by James Foley and Pete Ramand (about which McAlpine has spoken favourably). While Yes has had many ringing endorsements, I find its arguments less persuasive.

However, Common Weal’s short ‘Epilogue’ acknowledges the need for the kind of politics than can deliver the changes it advocates. It calls for political parties that will take on vested interests and challenge the Me First narratives. It also recognises the need for lively, energised and empowered communities.

“Only then,” it concludes, “can we have a Scotland that really does put all of us first.”

As Michael Meacher wrote in The State We Need, turning the current situation round “requires both deep moral conviction and intense political determination to engineer a series of profound reforms in financial and corporate governance, the role of markets and the state, company ownership, remuneration systems and worker representation”.  That’s a formidable challenge.

Tackling corporate elites and financial power lies at the heart of that struggle. Those with the power and the wealth will fight back. For me this spells ‘Better Together’ rather than separation – but that’s a debate that has almost run its course.

Common Weal points out that:

Britain has the second lowest level of industrial democracy among 28 European Union countries – only Lithuania is worse.

Among the 30 OECD countries, the UK is the 20th worst nation for health and safety at work.

British employees work among the longest hours in Europe and have the fewest holidays.

The British state pension is now the lowest in the developed world.

Scotland, along with England and Wales, has one of the highest imprisonment rates in western Europe.

Inequalities in health have grown substantially during the last 30 years, higher in Scotland than in England and Wales.

In Britain we live in the smallest houses in Europe. We lack private space, we lack public space and we neglect the play needs of children.

The UK has some of the highest rail fares in Europe and transport costs generally are very high by international standards.

A recent World Health Organisation survey found that British children are the least happy in the world.

Common Weal – Practical Idealism for Scotland, by Robin McAlpine, is available for £6 from the Jimmy Reid Foundation.

A short summary focusing on the Nordic countries is available to download here.

The website of the Common Weal project is here.

Yes: The Radical Case for Scottish Independence, by James Foley and Pete Ramand, is available for £10 from Pluto Books.

See also:
‘Scotland’s Referendum: Why the Left Should Oppose Independence’, by Will Brown
‘No Short Cuts to a Progressive Scotland’, by Vince Mills
‘Want to Escape Austerity? Move to Scotland’, by Ernie Jacques.