The Trades Union Congress is expecting thousands of people to join demonstrations around the country this Saturday calling for an end to poverty wages and a ‘real economic recovery’ that doesn’t favour the rich over ordinary employees.

Three marches are being held simultaneously in London, Glasgow and Belfast “to send a message loud and clear to employers and politicians across the board that Britain needs a pay rise”. 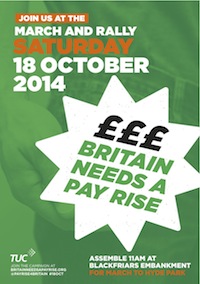 The urgency of the cause was made clear this weekend when new analysis from the TUC revealed that “UK workers are suffering the longest and most severe decline in real earnings since records began in Victorian times”.

According to the TUC figures, employees across the country are facing their seventh consecutive year of falling real earnings – a situation that has no historical precedent and is more severe even than the pay squeeze following the long depression of the 1920s.

TUC General Secretary Frances O’Grady said: “It’s shocking that even the most infamous periods of pay depression in the last 150 years pale into comparison when looking at the current seven-year collapse in earnings.

“The government says the economy is growing again, but there’s no evidence of any recovery in ordinary workers’ pay packets. Across the country people are struggling to make ends meet, as their pay lags behind prices and there seems to be no end in sight to their financial misery.

“Vast swathes of Britain are long overdue a pay rise. That’s why we expect to see tens of thousands join our march next weekend, calling on politicians and employers to help them share in the recovery and start spending again without fear of falling into debt.”

O’Grady told the Observer yesterday (12 October): “The huge squeeze on pay being felt by families up and down the country is the longest and deepest experienced since records began in the 1850s. Back then most people didn’t have the vote, small boys were still being sent up chimneys, and the poor lived in fear of ending their days in the dreaded workhouse.

“In 1865 the UK economy had taken a nosedive following reckless financial speculation in the City and the collapse of a major bank, not dissimilar from the events of 2008. But although pay fell in real terms in that slump of almost 150 years ago, the squeeze on pay that hit Victorian workers only lasted two years.”

The ‘Britain Needs a Pay Rise’ website sets out three reasons for joining the demonstrations.

One in five people earn less than the living wage. For the first time more people in work are below the poverty line than those out of work.

The spread of zero-hours contracts, agency working and bogus self-employment is trapping many below the poverty line.

2. The Cost of Living Crisis

We are told that the economy is now recovering and that Britain’s costs of living crisis is over.  But whose recovery is this? Ordinary people are £40 a week worse off in real-terms than they were five years ago.

And if bankers hadn’t crashed the economy and wages growth had stayed on track then workers on average would have £100 more in their pay packets every week.

Of course it’s not tough for everybody. In 1998 top chief executives earned 45 times the average wage – enough for anyone I’d say.

But now they earn 185 times as much.  That means they have earned what most people earn over 12 months in just a day and a half.

One key driver of the economic crash was growing pay inequality. Long before our banks went bust people’s wages had stopped growing.

The London march starts at 11am and follows the well-travelled route through the capital from Blackfriars Embankment to Hyde Park, while the Scottish TUC march for ‘A Just Scotland’ will gather at Glasgow Green from 10am and head to a rally in George Square, and the Irish Congress of Trade Unions’ Northern Ireland Committee’s ‘A Pay Rise For All’ march will form in Belfast’s Writers’ Square at noon before moving off at 12.45pm.

For more details and campaign materials, go to: http://britainneedsapayrise.org/