BARRY WINTER assesses the work of David Marquand and considers what it can offer a left desperately seeking some answer to society’s massive imbalance in power and wealth.

Let’s begin with a quote: “In the name of individual freedom, economic liberalism ended up centralising power and control in the state and large corporations.”

This insight summarises many of the arguments in David Marquand’s book, Mammon’s Kingdom, on what is wrong with Britain today. But the words are not his. They come from the recent e-book, One Nation: Labour’s Political Renewal, jointly written by Jon Cruddas MP and Jonathan Rutherford.

As you probably know, Cruddas has the awesome responsibility of coordinating Labour’s Policy Review for the general election, while Rutherford is an academic who stood down as editor of Soundings to work on the review.

David Marquand is both a distinguished academic and a significant political thinker who is firmly within the social democratic tradition. Formerly a Labour MP, he left the Labour Party in the early 1980s to help form the Social Democratic Party, led by the ‘Gang of Four’ former Labour MPs. The SDP was a reaction to the apparent ascendancy of the Bennite left. In 1996 Marquand returned to the Labour Party.

What impresses me about his work is the breadth and depth of his political vision, his intimate knowledge of history, the way he grapples with hard truths and, not least, his desire for a better society. His is not the smug, paternalist social democracy of ‘old Labour’, still less the hubris of the Blairite ‘third way’ of which he soon became very critical. Interestingly, he happily admits to seeing great value in Conservative thinkers such as Edmund Burke, social liberals such as John Stuart Mill, and the ethical socialists who paved the way for the Labour Party.

In the annual Compass lecture in 2011, he said of the latter: “The ethical socialists over 100 years ago espoused a vision of fellowship or fraternity rooted in the lived experience of the Labour movement and quite different from the statism and economism of the New Labour regime.” Although he did not mention any names in the lecture, in Mammon’s Kingdom he specifically mentions William Morris and Keir Hardie as examples of ethical socialists.

Decline of the public

Mammon’s Kingdom is a great – and sometime challenging – read, and this review does not cover the full range of its ideas but tries to focus on some of the key elements.

It was preceded a decade ago by another of his impressive books, Decline of the Public: The Hollowing-out of Citizenship. Although Marquand does not come from the Gramscian tradition, this earlier analysis of the intense cultural struggle at the heart of Thatcherism shows strong parallels with Gramsci’s thought. He argues that in seeking intellectual dominance, Thatcherism turned 1970s radicalism into radical individualism.

Decline of the Public addressed issues that are of even greater relevance today, especially the breakdown in political trust which has been highlighted so graphically in the two recent byelection results. Borrowing the term from Colin Crouch, he wrote of how “market-driven politics” has led to the decline in “political leaders, political parties and the whole political process”.

For him, “incessant marketisation” has made “Britain the most centralised state in Western Europe”. It has also done fundamental damage to the public domain and to the notion of shared citizenship. This has led to the demoralisation of public services, he argues. It has also encouraged what he depicts as the “growing interpenetration of politics and business” and of the culture of “sleaze” which “has accompanied it”.

A recent example of what Marquand had in mind can be found in the Guardian on 11 October 2014. The headline reads: ‘Civil Service boss to keep his brewery directorship’.

It says: “The new head of the civil service will be allowed to keep a £100,000-a-year position on the board of the drinks company behind brands such as Grolsch and Bulmers.

“John Manzoni, who starts his new role on Monday, has been given approval by the Cabinet Office to carry on working as a director for SABMiller, a brewing group that opposed the introduction of minimum alcohol pricing. Corporate filings show he takes his salary in company stocks and shares worth more than £250,000 in the company.

“The Guardian has established that Manzoni actually had three private sector jobs at the same time as carrying out his £190,000-a-year civil service role as head of the Major Projects Authority since February, which were all approved by the Cabinet Office.

“As well as the role for SABMiller, he was chairman of an energy exploration company … which is headquartered in the British Virgin Islands, and paid him £100,000 a year. He was also an adviser to an energy private equity firm … which does not disclose publicly where it invests its funds.”

The report notes that he will be standing down from these two firms but allowed to keep his financial links with the brewers: “A government spokesman said: ‘The Cabinet Office is satisfied there is no conflict of interest.’”*

In this way, Decline of the Public links very closely with the arguments Marquand further developed in Mammon’s Kingdom. Here he warns us that we are “sleepwalking our way towards a seedy barbarism; that our present way of life is unsustainable environmentally, emotionally and morally”.

He argues that the problems facing our society are rooted in the huge imbalances in wealth and power, nationally as well as globally. The dominant elites gain most from this me-based culture and the self-serving morality created by Thatcherism and endorsed by New Labour. It serves the rich very well, whether in good times or bad. And all the while, the social bonds between people are being undermined by growing inequalities.

Indeed, I’d suggest that the more the system manufactures poverty the greater the prejudice shown towards the poor. The current ethos echoes notions of the so-called ‘undeserving poor’ of the Victorian era. The post-war gains associated with welfare have been drastically devalued thanks to the moralistic assault of Thatcherism.

Marquand argues that because of their market power, we should see large corporations as significant political actors, although the term he actually uses is “political entities”. They should be scrutinised accordingly and brought under strict control.

He describes transnational corporations as “mighty agglomerations of economic and political power”, noting that their relations with Westminster go well beyond the traditional practices of lobbying politicians. As such, they have penetrated into the heart of government and into the Civil Service (as my earlier example illustrates).

This is a two-way process, and the ‘revolving door’ means some retired civil servants, high ranking members of the armed forces, and politicians increasingly find lucrative employment in the private sector. 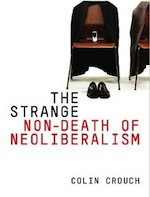 This applies to former Labour ministers too. As Marquand notes, seven Labour health ministers later worked in private health care and six Labour defence ministers took up posts in the defence industry. Tony Blair has also done rather nicely – one of the many jobs he took was as adviser to the huge US banking firm, JP Morgan, a role conservatively estimated to be worth £500,000 a year (although some suggest it’s double that).

In his book The Strange Non-Death of Neo-liberalism, Colin Crouch makes a similar case to Marquand. He argues that big corporations today are “right inside the room of political decision-making”. He says: “They set the standards, establish the regulatory system, act as consultants to the government, and even have staff seconded to government offices.”

Marquand argues for the introduction of “stringent rules” to counter the interpenetration of political and corporate elites, and “to stop retired politicians and public servants from finding lucrative perches in the private sector”.

In addition, he argues that company law should be changed so that stakeholder interests – the workers and local communities – have to be taken seriously. Tax havens under British jurisdiction should be suppressed. It does make me wonder what the Marquand of today thinks of the Marquand who left the Labour Party, for at that time, it was the left that was calling for greater control of transnational companies.

At the centre of Marquand’s argument is a profound moral critique of contemporary society and an evaluation of how we reached this sorry state – in both senses of the word. He calls for greater continuity, dignity and meaning in our society. Tackling what he identifies as ‘untamed capitalism’ will require a very broad public debate, a conversation as he calls it. His is not the language of struggle but of open dialogues and challenges to be met.

One major challenge here, as he observes, is the degeneration of the media which he suggests has played a leading part in the moral decay of wider society. The morality of market individualism has trounced the morality of social interdependence. As the former head of an Oxford college, he also applies this critique to the way today’s universities operate in a market culture.

Capitalism has to be brought under control, he says, for the market is not sacred nor self-correcting. The state does need to interfere in it, something seen as sinful by supporters of market-based morality.

So where, we might ask, are the sources of hope, the agents that might contribute towards redressing the massive social imbalances of power and wealth in our society?

Marquand identifies what he describes as “intimations of a challenge” to the worship of money. These include organisations like 38 Degrees, Citizens UK, the Living Wage campaign, Compass, and the green movement, among many others.

But he also recognises that it would be wrong to overstate their significance. As he puts it: “They do not, in themselves, amount to a national conversation, still less to a revolution of sentiment”, but “they are straws in a refreshing wind.” For him, they keep alive the notion of the common good, as opposed to self-seeking individualism.

He is right to recognise that, in spite of the loud self-serving clamour from the rich and powerful, there are progressive forces which need to find ways of coming together (if I may borrow Ed Miliband’s overused term).

Today, we are also witnessing the acceleration of anger, distrust and disillusionment with mainstream politics. The future is unwritten and it could turn in either progressive or reactionary directions.

So, despite its many faults and failings, let’s not be too hasty in dismissing the Labour Party at this time, as some are doing. We need an alliance of forces of a kind not seen before in the UK. One of its major tasks, I suggest, will be to challenge the cultural domination of Thatcherite ideas, as Marquand recognises. The dominance and reproduction of these ideas as ‘common sense’ blocks the path to a better society.

Forging an alternative understanding, an alternative common sense, is one of the biggest challenges we face. David Marquand has certainly made a valuable contribution to that process.

*Despite criticism from health professionals, the government has decided that John Manzoni will be able to keep his job at drink manufacturer SABMiller. You can read an update here.