GERRY LAVERY reviews Call Me Dave, the recent very unauthorised biography of the prime minister, and asks what Labour and the left have to learn from his and the Tories’ electoral success.

The publication of Call Me Dave received a great deal of publicity when it came out, with particular emphasis on what became known as ‘Piggate’. This revolved around the suggestion by an MP and “distinguished contemporary of Cameron’s at Oxford”, that the prime minister did something unspeakable to the mouth of a dead pig in a bizarre initiation rite for some obscure Oxford dining club. For all its faults, there is more to the book than that. 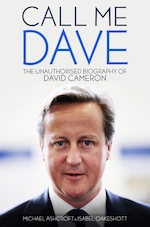 At one level, this long book (it’s more than 500 pages) is a case study of a leading member of the ruling elite, explaining how he was acculturated into that role. At another level, it is a story of how a crisis in the Conservative Party was resolved by a leader who saw the need to change, of his record as Leader of the Opposition and his first term as PM, although it is far from a work of scholarship in this regard.

It is also a book that aims to settle scores. Ashcroft writes in his preface about his own position within the Conservative Party, stating that Cameron promised him a worthwhile job which never materialised. He claims the book is “balanced and fair”, but there may be too many unflattering episodes for us to be convinced by this claim. Ashcroft did a lot of work for the party and ploughed “some £8million” into it, although the saga over his non-dom status caused much controversy.

Cameron is a character of different dimensions, depending whose view you listen to. He is variously described by sources as privileged, clever, charming, humorous, competent, incompetent, superior, ambitious, remote, cliquey, loyal, ruthless, misogynistic, insincere and lacking in any real political convictions or vision for his party.

Evidence is presented from witnesses, both identified and anonymous, although it tends to be presented rather than evaluated so, in the end, there is no real argument. Even the conclusion fails to draw the strands together in any meaningful way, other than to say that Cameron has been lucky and is a better prime minister than party leader. The evidence, such as it is, is left to stand on its own rather being shaped to help the reader.

However, there are some interesting insights that are worth highlighting. An important theme of the book is Cameron’s privileged background. His parents’ wealth, his education at a private prep school once favoured by royals, and at Eton and Oxford, are classic hallmarks of the traditional elite. But it’s the networks he has access to that are key to his development, whether helping him get internships or his jobs with Carlton Communications and the Conservative Research Department. Then there is the financial help he received from his family to buy a smart flat in Kensington. As Cameron himself is reported to have remarked to a cabinet minister, he was born with, not one but two silver spoons in his mouth.

One anecdote from his time in Kensington is hard to resist because it represents the apotheosis of the privileged world that Cameron lived in before becoming prime minister, and offers an ironic comment on this would-be moderniser. Cameron had a habit of visiting St Mary Abbott’s Church in Kensington on the same morning as its foodbank collected donations in the cloisters, the charity’s notice pointing out to the privileged congregation that their contributions needed to be simple, stating ‘Foie gras and caviar just cause problems’.

Although Cameron gives the impression of being competent, the book highlights a number of instances where his own judgement is open to question – he caused considerable resentment on his own side, for example, in his handling of the MPs’ expenses scandal; he ‘was widely seen to have flunked’ the penultimate TV debate during the 2010 general election; and he lacked transparency when reporting to his own side about whether Labour had promised a commitment to AV during the coalition negotiations. There are plenty of other instances where he appears to have upset either his own MPs or grassroots party members or both, gay marriage and Europe being two of the most prominent examples.

The book also raises questions about his performance during his first term as prime minister – over his Big Society initiative (what ever happened to that?) and his handling of the Lansley health reforms (eventually implemented but only after a pause and some 2,000 amendments). The book also covers the phone-hacking scandal, suggesting that Cameron had received three high-level warnings about employing Coulson (‘the working class grit in the oyster’), while his closeness to Rebekah Brooks caused him all sorts of problems, to say nothing of ’the contortions’ he had to go through over Leveson.

His diplomatic skills also come across as unsophisticated, ashis relationship with Merkel demonstrates. His handling of the Syria vote and the Libyan intervention are also subject to scrutiny. Whatever we think of his policy on Libya, there are questions to ask about whether the post-conflict planning had been sufficiently thought through – or, as Michael Ancram suggested, he had done an Iraq.

According to the authors, there is no evidence from Cameron’s days at Oxford that he was always a compassionate Conservative; in fact, there is not much evidence he was into student politics at all, although, one of his tutors says, “His views were on the whole a bit more to the right than most of the others.”

His modernisation tendencies were developed much later in the context of the waning fortunes of the Conservative Party during the New Labour years and emerged from within the the so-called Notting Hill set. This exclusive group included Steve Hilton, George Osborne, Michael Gove and Nick Boles, with Hilton identified as the main driver.

While there was an initial energy towards change, for example, a commitment to doing something about climate change, setting up a social justice commission, and to stop fetishising about tax cuts while working within Labour’s spending levels. However, despite policies on gay marriage and some budget protection for education, health and overseas aid, the drive to modernisation began to dissipate when they entered in office. The resignation of Steve Hilton as Cameron’s director of strategy in 2012 “exposed Cameron’s personal lack of reforming zeal”.

However, the social implications of their retreat from compassionate Conservatism are not really explored in the book, which is quite an omission given that judgements are being made on the character and performance of Cameron. Not only did the commitment to compassion dissipate, but, as we now know, it was replaced by policies which inflict an unprecedented level of cruelty on some the poorest and most vulnerable people. Despite mounting evidence of the damage they cause, Cameron allows such policies to persist.

His government has also cut public expenditure unfairly and has done so irresponsibly and recklessly, especially when it comes to local authority spending, so vital in holding the social fabric together. The Audit Commission has recently pointed out that “the Department for [sic] Communities and Local Government literally doesn’t have a clue what is going on: it does not monitor the impact of funding reductions on council services”.

It also states that the government risks only becoming “aware of serious problems with financial sustainability of local authorities only after they have occurred”. To then complain about local government cuts in your own back yard, as Cameron recently did when complaining about Oxfordshire’s cuts to children’s services, represents a new level of victim-blaming.

One chapter, entitled ‘The Big Dip’, asks: “What motivates David Cameron?” In 2011 there was concern within Downing Street about polling evidence suggesting the public didn’t know what the government was trying to do beyond making cuts. The riots of the same year stimulated a law and order debate, but “there were subtler concerns about Cameron’s leadership”.

Suspicions were aroused that “the nasty party” might be back. At one point during this period even Cameron himself seemed confused about his compassion credentials. The book states: “Asked on the Today programme if he was still a modern compassionate Conservative, he demurred. ‘I’m a common sense Conservative,’ he replied uncertainly.”

Concerns were raised within his own party about Cameron’s defining purpose – one source suggested that being PM was “a stimulating hobby” for Cameron and that “he is in politics to be in politics”. Another, who worked with him, declared: “There’s nothing there!” “He’s good in public, good at repartee.” And, “He’s got a good memory for detail. But there’s no guiding philosophy.” Even Thatcher, apparently, judged him to be “shallow”.

Whatever Cameron’s shortcomings, he needs to be seen in a wider political context. He became leader of the party at a time which covers the economic crisis of 2008. Up to that point we had two variants of neo-liberal hegemony, what Neil Davidson has called ‘vanguard neo-liberalism’ under Thatcher, and ‘social neo-liberalism’ under Blair. We have now entered a third phase under Cameron, which Davidson calls ‘crisis neo-liberalism’.

Cameron’s undoubted presentational skills in looking modern, attacking Labour (“they didn’t fix the roof while the sun was shining”) and spinning the necessity for austerity so that it has become lodged in the public consciousness, should not to be underestimated. In some ways, for all his problems within his party, Cameron was probably the best choice to lead the Conservatives through the crisis of neo-liberalism.

Nor should we underestimate the Conservatives’ ability to secure just sufficient continuing support for their project, even following Cameron’s future departure from Downing Street. At the moment, Labour’s prospects for victory in 2020 look bleak, given the collapse of its vote in Scotland, the boundary changes and the party’s internal problems.

However, neo-liberal hegemony may not be as solid as it once was. As Antonio Gramsci suggested, hegemony has to be constantly maintained with a mixture of consent and coercion. At times of crisis, the tilt is towards greater coercion and the Conservatives are showing more of an appetite for this, as demonstrated by their gerrymandering of electoral boundaries, the clamp down on trade union activities, and so on. Unexpected developments, contradictions and resistances are all capable of causing instability for the government.

But, we cannot afford to wait for some ‘inevitable collapse’. First, it’s not inevitable, even after five years of crisis neo-liberalism, as the last election showed. Secondly, unless the voting public are persuaded by a powerful, well organised and effectively communicated critique of what is happening, and presented with a credible, understandable alternative, then it’s not just a dead pig that will be subjected to unspeakable acts.

Although ‘Dave’ may not be much more than a smart upper-class PR man, it still might be time, as Owen Jones has recently argued, to learn from his and his party’s methods of political communication, albeit applied in a more honest way and for more humane purposes.

Call Me Dave: the Unauthorised Biography of David Cameron, by Michael Ashcroft and Isabel Oakshott, is published by Biteback Publishing.