The Labour left today could do with a few members like Ada Salter, the quietly-spoken, peace-loving ILPer whose pioneering work transformed south-east London in the early decades of the 20th century. MATTHEW BROWN attended the first Ada Salter Day on Saturday 16 July.

There have been many reasons in recent weeks to yearn for a different kind of left, and a different kind of Labour Party. The inaugural Ada Salter Day in south east London last Saturday provided yet more cause to reflect on what a committed, campaigning, credible and radically-minded Labour movement can achieve, at its best, and how much is now under threat from its current sad state and potential demise.

‘If the Labour Party didn’t exist, you’d have to invent it,’ was a phrase you used to hear at ILP events as it discussed the need for a social democratic vehicle to advance radically reforming measures and build a popular movement for change. Ada Salter was one of those who did invent it.

She was the pioneering ILPer who, along with her husband Alfred and a movement of ethically-inspired grassroots socialists, transformed their poverty-wracked corner of the capital into a beacon for public health, public housing and public space, growing the Bermondsey ILP and the local Labour Party from virtual non-existence to an all-conquering municipal force.

The ‘Bermondsey revolution’, as it became known, was captured in a 1940s book by Fenner Brockway, and more recently in Graham Taylor’s celebrated biography of Ada, subtitled Pioneer of Ethical Socialism.

Taylor has long championed Ada’s memory, against what he regards as Brockway’s over-emphasis on Alfred, the more famous MP and doctor who provided one of the first free health services in the country to the local working class community, and became a parliamentary campaigner for peace and social justice.

According to Taylor, however, it was Ada who was responsible for most of the ideas behind the ‘revolution’, drawing on the early ILP’s ethical socialism, her Quaker faith and her experiences in the women’s movement of the early 20th century. It was these women’s and workers’ movements, says Taylor in the introduction to his book, “who created the welfare state in this country, not the political leaders”.

She was also an unstinting trade unionist, defending striking dockers and women factory workers, and a tireless peace campaigner, fighting conscription during the first world war and lobbying against conflict throughout the 1930s.

What would Ada do now?

Yet by the time she died in 1942, aged 76, much of her public work had been destroyed by the blitz, and the memory of her achievements had already begun to fade. While Alfred’s name lived on, through a street name, a plaque and a statue, Ada was all-but forgotten.

In 2014, that began to change when a new version of ‘Dr Salter’s Daydream’, a sculpture depicting the Salter family, was resurrected following theft of the original. The first version had included Alfred, daughter Joyce, who died at eight of scarlet fever, and the family cat – but not Ada. Now she took her own place by the river, complete with tree-planting spade and a hooked palm in which residents could place a bouquet of flowers. 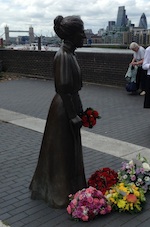 Two years later, this statue formed the centre-piece of the first Ada Salter Day as more than 100 people gathered under bright sun on the banks of the Thames to hear tributes from Southwark’s current council leader, Peter John, from Lorna Greene of the GMB, and from Juliet Prager of Quakers in Britain.

The mayors of Southwark and Ada’s hometown of Raunds in Northamptonshire were also present, as was actress Sheila Hancock, while human rights campaigner and one-time local Labour candidate Peter Tatchell said of the Salters, “What they did in that era was trend-setting. People came from all over the world to see the Bermondsey experiment.

“Ada didn’t accept the world as it was; she had a vision of what it could be… She was a pioneer in so many ways, as an internationalist, a socialist, a feminist and an environmentalist.

“It is a tragedy that her role has so often been forgotten. But in these times we also have to ask ‘What would Ada do now?’”

That question hung in the air as the gathering wound through narrow cobbled lanes beside old warehouse buildings-cum-modern apartments to the Sands Film Studio for a performance of the Journeyman Theatre’s one-woman show, Red Flag over Bermondsey, performed by Lynn Morris.

The whole day was a triumph for Taylor, who also put together an exhibition on Ada and encouraged visitors to see the Ada Salter Gardens in Southwark Park and the remains of her remarkably spacious and floral social housing in Wilson Grove.

At a Q&A session following the play, Taylor was asked for his own response to Tatchell’s question. “She may have been drawn to Corbyn,” he mused. “Or she might have been in the Green Party. But really it’s impossible to compare eras because the world is so different now. We really don’t know.

“What we do know,” he said, “is that her politics were largely influenced by the ILP and its ideas of ethical socialism. It was that spirit which she put into practice in Bermondsey.”

How we could do with it now.