Saturday 20 August 2016 marked the 40th anniversary of the day when Jayaben Desai walked out of the Grunwick photo-developing company in London, igniting a strike which drew support from thousands and interest from around the world. GRAHAM TAYLOR remembers the woman whose dignity in dispute recalled the ethical traditions of the ILP.

The leading figure of the Grunwick strike, Jayaben Desai, should be particularly remembered, not just for her remarkable qualities, but because her brand of ethical socialism was not dissimilar to that of the ILP. For her, the Grunwick strike was about low pay, compulsory overtime, trade union recognition and the inferior social status of women and immigrants – but more importantly it was about human dignity. 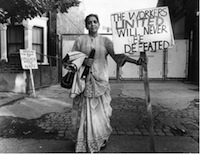 She walked out of Grunwick on 20 August 1976 because she felt she and the other immigrant women had been constantly humiliated, on all issues, and now, she said, “I want my freedom.”

Jayaben was a trained and qualified tailor who taught dressmaking as well as Gujarati to the Indian community in Wembley, where she lived. Since her childhood she had been inspired by the ethical ideals of Gandhi. Her walk-out was in solidarity with her community and in protest against injustice.

Such a stance was in line with the ILP tradition, from Keir Hardie to James Maxton. She did not walk out to start the Marxist revolution nor to cadge votes for the local MP. She condemned the violence of some demonstrators on the picket-line and rushed to the hospital bedside of PC Trevor Wilson when he was struck by a bottle. Equally, she condemned the Labour MPs who distanced themselves from the strike for electoral and careerist reasons.

There were even some direct links between Jayaben and the old ILP. At the peak of the strike, in the early summer of 1977, an APEX trade union official read out to the strikers a message of support from a woman he described as a “stalwart of the movement”. This was Jessie Stephen of the ILP, a former suffragette and union official who, despite being old and blind, was anxious to recognise in the Grunwick strikers heirs to her own tradition.

The other link was one of coincidence. The place on the River Thames where Jayaben’s ashes were cast in 2011, in accordance with Hindu custom, is the same place where a statue now stands to Ada Salter of the ILP, the only statue in London to a woman trade unionist.

In honour of Jayaben and the 40th anniversary of the Grunwick strike, here is my obituary which appeared in the Morning Star on 8 January 2011.

In November 1976, the Morning Star ran the first article in a national newspaper on the strike at Grunwick, a photo-developing company in London. As Indian women were so prominent on the picket lines, it appeared on the paper’s women’s page with the title ‘Sari Power’.

The pickets had often been the butt of sari jokes from passing men, but when a Grunwick manager joined in, the charismatic strike leader Jayaben Desai had reacted: “I’ll tell you something, Mr manager, Mrs Gandhi wears a sari and she runs a country of 600 million people. You can’t even run a little factory.”

The strike was about respect for workers, she explained. A joke was not a joke when it came from someone who could sack you on the spot or force you, at a moment’s notice, to do compulsory overtime late into the evening.

The strike had started on that issue. It was the hottest August for decades and the manager of the mail-order department had an aggressive approach. Many of the Grunwick workers were refugees from east Africa. Desperate to make a living in London, they accepted gratefully any work, any pay, any conditions. But not on this occasion.

At a late hour, Jayaben decided not to accept any extra work. The constant threat of dismissal had nagged away “like a sore on our necks”, she said. Suddenly, she found herself saying: “I want my freedom. I am going. I have had enough.”

When she and others stormed out, she had no idea what to do next. But by September the strikers were unionised and demanding union recognition. In November the strike was debated in Parliament. In December the TUC gave them full support. In June thousands flocked to mass pickets in the narrow streets. Pitched battles between police and demonstrators broke out, as dramatic headlines took news of the strike, and pictures of Jayaben, all over the world.

Jayaben was born on 2 April 1933, just south of Ahmadabad in India. As a child she supported Gandhi and the movement for Indian independence: “A flag was always in my hand.”

In 1955 she married Suryakant Desai, a factory manager from what is now Tanzania. They had two sons. The first, Sunil, was born in India but the second, Rajiv, was born in Dar-es-Salaam. But, as the British withdrew from east Africa, racial tensions surfaced, with violence, and Suryakant, a British citizen, eventually headed for London. There, they had to take menial work. He became an unskilled labourer, while Jayaben worked as a sewing-machinist until she joined Grunwick in 1974.

The strikers faced a stubborn opponent in George Ward, the Anglo-Indian owner of Grunwick, but they found talented allies in the locality. The secretary of Brent Trades Council was Jack Dromey, later deputy general secretary of the TGWU, now an MP. The chairman was Tom Durkin, a Communist renowned nationally as a powerful speaker. At Brent Law Centre there were lawyers such as Harriet Harman, now deputy leader of the Labour Party.

The union leaders of the day also tendered their support but, with them, Jayaben had an uneasy relationship. She noticed their fondness for rhetoric and empty promises: “They tell me about their solidarity, but it’s like honey on my elbow. They keep telling me it’s there, but I can never taste it!”

In June, she relented as she watched miners from Yorkshire march through the streets: “Now I believe in it, this solidarity.” But in August she was disillusioned again as union leaders, under intense pressure from Labour ministers, coerced the strike committee into ending the mass picket. By November, she was on hunger strike outside the TUC with Vipin, Johnny and Yasu, as the strike crumbled into pieces all around them.

Strong intervention by the National Association for Freedom (NAFF) had turned the tide against the strikers. Representing the new libertarian right, favoured by Margaret Thatcher, the NAFF backed Ward to the hilt. With Operation Pony Express they defeated the Brent postal workers whose boycott of the mail-order business would otherwise have brought Grunwick to its knees. But they were much assisted by a weak Labour government, which failed to enshrine trade union rights in legislation.

Jayaben was unbowed by defeat. She had fought to the end, unlike some, and could hold her head up high. The Scarman court of inquiry had vindicated the strikers on nearly every count. She was part of a movement for human rights which stretched from Rosa Parks to Nelson Mandela, and that movement was victorious.

Her picket-line repartee also survived. I jotted her sayings down and in July 1977 sent off to Lawrence and Wishart a draft for the book that eventually became Grunwick: The Workers’ Story. Her central message will echo down the ages: “The strike is not for the money. This is what Ward will never understand. The strike is for our human dignity – and we cannot live without it!”

Jayaben died on 23 December 2010 after an accident in May. Her son, Rajiv, had died in 2006, but she was survived by her husband, Suryakant, by her elder son, Shivkumar (formerly Sunil), and by five granddaughters.

In recent years there has been renewed interest in her cause. Brent Trades Council organised a celebration of the strike’s 30th anniversary in 2006. Then came Chris Thomas’s fascinating film, The Great Grunwick Strike, in 2008, Andy Beckett’s chapter in When the Lights Went Out (2009), and the exhibition, Striking Women, at the Women’s Library (2009-10).

All of these accounts express admiration for Jayaben, for her warm humanity, for her rock-hard character and for the example of defying injustice that she bequeathed to us all.

Graham Taylor worked as a lecturer in further and higher education and has written extensively on the history of the labour movement.

He is co-author with Jack Dromey of Grunwick: the Workers’ Story (1978). A new edition of the book is being published to mark the 40th anniversary of the Grunwick strike. The occasion is also being marked by an exhibition, a conference and a mural.

Ada Salter: Pioneer of Ethical Socialism by Graham Taylor is published by Lawrence & Wishart and available to buy here for £18.99.

Taylor’s profiles of Ada Salter and her husband Alfred, written for the ILP’s 120th anniversary series, are available on this website:
‘ILP@120: Ada Salter – Sister of the People’
‘ILP@120: Alfred Salter & the Bermondsey Revolution’.