It’s widely assumed that the Bank of England creates money. In fact, only 3 per cent of the money in circulation is physical cash. The other 97 per cent is produced online by the big, commercial banks. And what’s more they make whopping profits from doing so.

These details have been revealed recently in a report from the New Economics Foundation and the Copenhagen Business School. 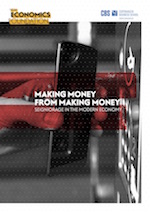 The report notes that between 1998 and 2016, Britain’s commercial banks earned £23 billion pounds every year from making money online. This hidden subsidy makes up over 70 per cent the banks’ profits. It allows the bankers to reward themselves generously and otherwise act less than responsibly, as we saw in 2007/8.

The report argues that the public should have greater control over the creation of money: that the Bank of England could produce a higher proportion – perhaps all – of the money supply. Doing so would allow households and businesses to choose whether the central bank or the commercial banks should hold their accounts.

This reform would also enlarge the Bank of England’s profits significantly and much of it could then be paid to the Treasury. The report calculates that if just 30 per cent of Britain’s money supply had been held by the Bank of England “the government would have gained £182bn – that’s over six times the projected NHS funding gap.”

It argues that it’s time to take back control of our money supply. As it concludes: “Our money should work for us, not the banks.”