MELISSA BENN examines the continuing inequalities in our education system, and the failures of recent governments to close the gaps. What could Labour do to promote an alternative vision?

Despite endless policy initiatives, exhaustive reforms and official obeisance to the questionable aim of ‘social mobility’, our education system still has yawning gaps in outcomes between children from poorer and more affluent families. Despite an almost permanent revolution in education policy, surprisingly little has shifted in this respect.

First, the difference in outcomes in GCSE results between pupils from different social backgrounds – in 2015, a third of children from families officially classified as ‘disadvantaged’ achieved five ‘good’ GCSE’s, compared to 60% of students from more affluent backgrounds. Give or take a percentage point, this gap has remained steady for several years. 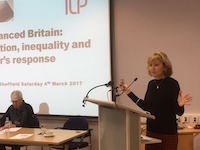 Secondly, as the outgoing chief inspector of schools, Michael Wilshaw, frequently points out, there remains a stark gap in school quality between the north and south, with 72% of schools rated good and outstanding in the former while 84% are judged so in the south. In some areas of Leeds for example, only 4% of children achieve the Ebacc (five core academic subjects at GCSE) while in Richmond, a wealthy borough of London, 52% do.

When we ask why this is, we can easily identify some key factors.

First, wider social inequality inevitably shapes young people’s educational chances, as it always has. The gap between rich and poor has grown over the past decade, and is now reaching crisis proportions in some parts of our society.

Secondly, our school system reproduces, and confirms, many forms of inequality. The continuing existence of independent schools, educating approximately 7% of young people, most of whom are from more affluent backgrounds (and the percentage has changed little over the years), ensures that privately educated young people gain access in disproportionate numbers to Russell Group universities, Oxbridge, influential social networks and well-paid careers.

The state system has its own clear hierarchies, from the grammar sector – which currently educates only 2-3% of children on free school meals – to a range of schools including selective ‘elite’ faith schools and the growing number of academy and free schools, which are in charge of their own admissions and can, through a range of existing and newly granted powers, determine their own intake, to some extent.

League table and Ofsted demands add to the pressure on schools to ‘work’ their admissions in this way. Critics of comprehensive reform in education only ever point to ‘selection by house price’, yet experiments such as the ‘random allocation’ policy, currently being tested in areas like Brighton, could limit distortions arising from accidents of residential demography.

Thirdly, despite much rhetoric regarding social mobility and equal opportunity, the policies of successive governments over the past 20 years have not made as much difference as they could. This, I would argue, is due to two things:

A brief survey of three recent administrations shows that while there have been some important initiatives, particularly in the New Labour era, no government has been able significantly to break the link between family background and educational attainment, and shift entrenched inequalities. Some policies may, in fact, have made them worse.

Under New Labour, from 1997 to 2010, there were some excellent initiatives. These included: the National and London Challenge, in which expertise within the system was more widely shared, with stronger schools and headteachers helping weaker ones; Building Schools for the Future, which rebuilt and refurbished part of the school estate, albeit under the wasteful Private Finance Initiative; and reduction of class sizes to 30.

While the sponsored academy programme was, and remains, controversial, as were aspects of the national literacy initiative, the political and administrative energy directed towards schools was a welcome change after the apathy-induced damage of the Thatcher years. The turn-around achieved by boroughs like Hackney remain a good example of the ways that a well run, collaborative system can raise results across an entire area.

The Brown era saw some interesting initiatives including trying to find a way to include childrens’ well-being on a school’s report card, and keeping a significant role in school building and planning for local authorities.

However, there were also some significant missed opportunities during the 1997-2010 period, such as the failure of New Labour, with its massive parliamentary majority, to commit to phasing out selection in areas such as Buckinghamshire, Kent, Lincolnshire and Birmingham. As a result, hundreds of thousands of children over the past 20 years have had to face the 11-plus, and the continuing existence of grammar schools has provided the seedbed for the expansion of selective education we are seeing today.

The Coalition government of 2010 to 2015 was highly critical of what it saw as ‘dumbing-down’ under New Labour. This led, over its five years, to highly controversial reforms to the primary and secondary curriculum, testing and exams, which narrowed the education on offer in state schools.

Under Michael Gove, authoritarianism was combined with greater de-regulation. On the one hand, state schools were encouraged to mimic and adopt the traditionalism of private education (although in reality only independent schools possessed the funds to offer a more broad-based arts education). Blazers, competitive sport, undue emphasis on character education, and major reform of curriculum and qualifications, reducing the arts-based element of many schools, took state education in fundamentally the wrong direction while significantly increasing the workload of teachers.

On the other hand, major de-regulation of state education – including mass acadamisation of about half the secondary sector, the introduction of free schools, a move away from university-based teacher training and education, and a more-or-less free market in terms of teacher recruitment, school building and place planning – has led to all sorts of inefficiencies, shortages and even chaos. It has also reduced the accountability of public education.

Under Theresa May’s administration, from July 2016, government policy has been concentrated on the expansion of selection, despite widespread evidence that selection benefits more affluent children. Across the political and educational world, there has been almost united opposition to the plan. A White Paper, making explicit the government’s plans, is expected in late April 2017.

At the same time, rising national insurance and pension bills, combined with changes to funding, threaten a budget crisis in many schools, and many headteachers are now protesting at the cuts they are faced with. Some have called this unprecedented, powerful, if always polite protest, the ‘Headteachers’ Spring’.

For some time now, many people, particularly in the teaching profession, but also among the public, have hungered for a bolder, bigger vision of state education. Inevitably, they look to Labour, committed under Jeremy Corbyn’s leadership to the creation of a National Education Service, to provide fresh and fair initiatives.

Reform is never easy in an embattled public service, dealing daily with austerity, but there are a number of areas that clearly need attention. It is here, I would argue, that Labour should be preparing its policy.

No more selection: In the immediate moment, Labour should commit to no more expansion of selection (as indeed it has) and the phasing out, over several years, of selection where it exists (which it has not). Selective education divides populations, largely on class grounds, and it mostly damages the educational chances of poorer pupils.

‘Secondary moderns’ in selective areas struggle to recruit and retain staff, to provide a full and stimulating curriculum and often to inspire, motivate and encourage young people who have been told that they are a failure at the age of 10 or 11.

Fair funding for all: But not through the reduction of existing budgets for any school. Inevitably, this would mean a commitment to protecting, and increasing, the education budget overall, so that no areas lose out, particularly not in poorer parts of the country.

Expansion of meaningful vocational education and apprenticeships: But not as the ‘flipside’ of expanding academic selection, which is the current government’s approach, post-Brexit, returning us to a version of the post-1945 situation. In this scenario, selection will, we are told, be mitigated or ameliorated by a small, but not significant, increase in the number of poor children admitted to grammar schools – or possibly only delayed until mid- to later adolescence.

A far better solution to this dilemma would be to re-think the entire secondary phase which many argue is now outdated and not fit for purpose. Labour should revisit some of the ideas in the Tomlinson report of 2004, as well as consider the more recent proposals of The Heads Roundtable, which has proposed a ‘baccalaureate’ type structure for secondary education.

This would offer every secondary age pupil a chance to mix vocational, academic and arts subjects up to 16, but also to undertake more stimulating personal projects and for there to be a component of citizenship lessons, community service and personal, social and health education within the overall mix. Longer term, government might consider the abolition of hugely expensive GCSEs, replacing these with a final set of exams at 18.

Simplification of school structures: It is now generally agreed that our system is, in the words of one secondary head, ‘a complete dog’s dinner’, with two clashing, parallel systems of school governance – the under-resourced, under-supported local authority maintained system, and structures set up to supervise and foster the burgeoning academy chains and multi-academy trusts, headed by the somewhat mysterious figure of the Regional School Commissioner. Any incoming government serious about reform should now be consulting on how to integrate our school system and reform key elements such as funding and admissions.

A clear commitment to keeping education public: And to rebalancing the financial relationship between the private sector (in all forms) and state education.

Melissa Benn is a writer and campaigner on education, and current chair of the cross-party group campaigning group Comprehensive Future.

A earlier version of this article was presented as a talk to the ILP’s Unbalanced Britain conference on education and inquality in Sheffield on 4 March 2017.