Despite its decline, the Independent Labour Party preserved the values of democratic socialism during the interwar years, according to ILP historian Ian Bullock in his new book, due to be published in December by Athabasca University Press.

Under Siege: The Independent Labour Party in Interwar Britain explores the ideas that motivated the ILP during this tumultuous period. By combing through newspapers, leaflets and party documents, Bullock arrives at a detailed explanation of the most controversial and significant debates in and around the ILP. Some, such as the Living Wage policy, continue to bear contemporary relevance. 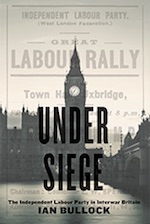 During the period between the two world wars, the ILP was the main voice of radical democratic socialism in Britain. Founded in 1893, it had, since 1906, operated under the aegis of the Labour Party.

As that party edged nearer to power following World War I, forming minority governments in 1924 and again in 1929, the ILP found its own identity under siege. On one side stood those who wanted the ILP to subordinate itself to an increasingly cautious and conventional Labour leadership; on the other stood those who felt that the ILP should throw its lot in with the Communist Party of Great Britain.

After the ILP disaffiliated from Labour in 1932 in order to pursue a new, ‘revolutionary’ policy, it was again torn, this time between those who wanted to merge with the Communists and those who saw the ILP as their more genuinely revolutionary and democratic rival.

At the opening of the 1930s, the ILP boasted five times the membership of the Communist Party, as well as a sizeable contingent of MPs. By the end of the decade, having tested the possibility of creating a revolutionary party in Britain almost to the point of its own destruction, the ILP was much diminished – although, unlike the Communists, it still retained a foothold in Parliament.

Despite this reversal of fortunes, during the 1930s – years that witnessed the ascendancy of both Stalin and Hitler – the ILP demonstrated an unswerving commitment to democratic socialist thinking.

Drawing extensively on the ILP’s Labour Leader and other contemporary left-wing newspapers, as well as on ILP publications and internal party documents, Bullock argues that the interwar ILP made a lasting contribution to British politics in general, and to the modern Labour Party in particular, by preserving the values of democratic socialism.

To read more about Under Siege: The Independent Labour Party in Interwar Britain go to the AU Press website where a free PDF version will be available to download from December.

Readers in the UK can purchase the book through Combined Academic Publishers or other online vendors.