The world has become an increasingly hostile place for progressives, argues ANDREW GAMBLE. In the face of great challenges, how can it become relevant again and win back support?

The last decade of austerity and slow recovery since the 2008 financial crash has also been a period of electoral defeats and setbacks for the progressive left, during which the political initiative has mostly been captured by the centre right and now the populist nationalist right.

There are long-term question marks over how growth and prosperity can be restored given the failure of the model which dominated before the crash and the fundamental changes needed to adjust to climate change. There are also new security threats from the re-emergence of strategic rivalries between great powers, and the prospect of new arms races, in nuclear and cyber weapons in particular.

Finally, there are threats to democracy, not just from the populist nationalists, but also from the spread of authoritarian regimes and illiberal democracies around the world. These have led to the weakening of representative democracy, a pervasive loss of trust, and the growth of new forms of irrationalism and fake news. 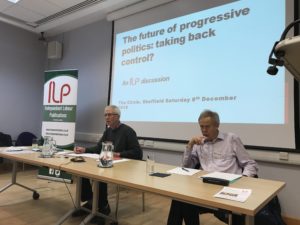 In the face of these challenges how does the progressive left make itself relevant again and win back support?

Progressives believe that human societies are capable of being improved, but are also aware that progress has always been uneven, is often won at huge cost, and that, in the name of progress, human beings have unleashed forces they increasingly seem unable to control. The situation for most people in the world has measurably improved over the last two centuries, but there is so much more to do, and new dangers threaten what has been achieved.

The rise of populist nationalism in the last decade is a reminder of the fragility of political orders. Institutions which have provided peace, prosperity and well-being can easily be undermined and even discarded. To be a progressive in politics has always meant to support democracy, in the sense of extending civil, political and social rights to all. Now those rights are coming under sustained attack, how should the left respond?

Two things are needed above all. First, the left needs to embrace ideas which once again speak of the future and a better society for all, which can inspire change and build new coalitions of support.

Secondly, it has to do politics differently. The left has to be an open left, building the broadest possible coalitions, and avoiding the factionalism and tribalism which have so often hampered it in the past. Progressives also have to become democrats again rather than technocrats, and constantly interact with citizens.

The open left’s vision for the future has four main priorities.

The first is an open multilateral international order, which develops some of the multilateral institutions we already have at global and regional levels,  but goes beyond the western-centric order of the past by fully involving the rising powers in Asia, Africa and South America in determining the rules that should govern this order.

Failure to maintain multilateral institutions and build on them hands the field to economic nationalism and military adventurism. This does not meaning accepting many of the practices and outcomes of the international order as it is currently organised, but it does mean accepting that we need to pool sovereignty to retain some of the benefits of international co-operation, while subjecting it to much greater regulation and political oversight.

The second priority is an inclusive and sustainable economy, based on reorienting our economic thinking away from the pursuit of economic growth at any cost and the maximisation of shareholder value to what is required to safeguard the biosphere and maximise value for all stakeholders, particularly domestic households and local economies.

There is a wealth of new economic thinking on the progressive left which challenges the mainstream consensus. Its themes include what comes after austerity, the future of work in the new digitalised economy, a universal basic income, and a green New Deal.

The next economic model – in seeking to rebalance the economy, and tackle the problems of climate change and places left behind by globalisation – will need to strengthen and extend state capacities to make possible a more decentralised, egalitarian and sharing economy and encourage the emergence of new forms of co-operative enterprise. Local economies need more insulation from the globalised sectors of the economy, and economic activities should be judged on how well they maximise stakeholder value rather than shareholder value.

The third priority is a remodelled welfare state, based on a new commitment to universal basic services, which might include a form of universal basic income, to provide households with security, through income support and services, but also opportunity, through investment in education, health and care, ensuring that no-one is left behind.

Citizens have to be persuaded to pay more for the many benefits they receive from public services which make up modern welfare states, but that can only happen if they perceive the tax system to be fair and equitable. Providers need to experiment with delivering their services in more local and decentralised ways. Hypothecated taxes, living wages, equal investment in all 16-20 year-olds, and capital grants to individuals are all ideas that should be explored further.

The fourth priority is a renewed democracy, based on defending the basic institutions that have come to define democracy, including the rule of law, equal rights for all citizens, media plurality, freedom of association and freedom of speech, but going beyond them to deepen democracy by extending it into new areas in order to tackle the many new threats, such as the erosion of trust in representatives and experts, the eruption of social media, and the weakening of communities.

The experiment under way in Preston is rightly receiving attention as one way to go. Alongside this, the quest for equal citizenship, targeting the many forms of discrimination, disadvantage and abuse which still damage so many lives, remains central to the progressive project.

Doing politics differently means accepting that there is no single progressive party, no single will of the people or class that progressives can lean on in developing projects for change. We live in complex post-industrial economies and multicultural societies. Opinions, interests, and knowledge are all divided, and the old certainties and landmarks have disappeared.

An open left has to acknowledge that there are many values, many perspectives and no single right way. That is the first step necessary to forming a new progressive coalition. Out of this can emerge a new and convincing vision of what is wrong and what has to be done to put it right, and a leadership that can convince voters that it is both competent and honest.

Millions of voters across Europe will rally to a movement of progress that has an inspiring vision of the future, detailed policy ideas, a leadership that wins trust, and a politics that is open and inclusive. Bringing that movement and that coalition into existence, challenging the orthodoxies of the old political establishment of traditional conservatives and the new emerging political establishment of populist nationalists, is the challenge now for progressives everywhere.

His new book Open Left: The Future of Progressive Politics is available from Rowan and Littlefield International.

This article is an edited version of the talk he gave at the ILP’s dayschool on ‘The Future of Progressive Politics – Taking Back Control?’ on Saturday 8 December 2018 at The Circle in Sheffield.