Labour seems divided over ideology and strategy, between the ‘old’ left and ‘new’. BEN SELLERS traces the history of Labour left groups over the last few years and calls for a new bridge across the generational divide.

For three decades, I’ve been involved in organising the left in and around the Labour Party. For barely three of those years, the Labour left has been in some kind of ascendancy. The explosion of socialist ideas and movement-building that has taken place since 2015 is without precedent in the recent history of the party. The rest of that time, the Labour left has been led by a small band of stalwarts, largely ignored by the rest of the party, never mind the political establishment and mainstream media.

It was sometimes a lonely place. I remember, as recently as January 2015, looking around a room of 200 or so socialists who had turned out on a wet Saturday in London for yet another new initiative, and thinking, so this is it, then? The room was full of good people, decent socialists and a wealth of experience. There was too much grandstanding – mostly on issues we all agreed on – and nowhere near enough consciousness of the need to organise. But the reality was, that wasn’t ‘it’: there were tens of thousands outside that room, who were members pre-2015 and ended up voting for Jeremy Corbyn. 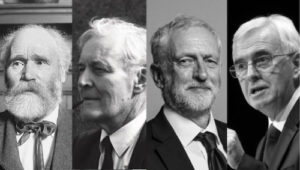 Inevitably, the activist core had shrunk: we’d been in the wilderness for too long, and the defeats suffered had created a culture that was inward-looking. The last ‘high point’ for the Labour left had been way back during the deputy leadership campaign of 1980, when Tony Benn lost by a whisker to old Labour right-winger Denis Healey. That defeat took its toll, and the Labour left was a divided mess for some time after. As it shrank – under attack from Neil Kinnock, who made isolating the Bennite left the test of his leadership – it lost confidence.

In the 1990s, socialists in the Labour Party gathered around the Socialist Campaign Group. But that organisation was very focused on parliamentary big beasts of the Labour left – Benn, Dennis Skinner and Eric Heffer – rather than being the grassroots, active, campaigning left we needed. There was never enough of an attempt to spread the Socialist Campaign group to the regions, although a few local groups did emerge.

The Labour Representation Committee (LRC) was formed by John McDonnell in 2004 with the explicit aim of ‘re-founding’ the Labour Party (hence the name referencing the organisation that ‘gave birth’ to the Labour Party at the beginning of the 20th century). The LRC was designed to take the left out into the country, and to challenge the reliance on leading figures. It was an attempt to develop a radical, grassroots left which was driven by the members and trade union activists rather than the parliamentarians and union general secretaries. Sound familiar?

However, despite having a relatively large membership, the LRC punched well below its weight. One of the reasons was an open political culture, which provided the ‘Heinz 57’ flavours of left groups with a haven from the strictures of New Labour. The flip side of this openness was that the LRC became a site of battle for control for those groups, while those who’d dedicated their lives to the socialist cause, within the party, became increasingly demoralised. And that’s pretty much where we were on the eve of the 2015 leadership election.

I turned from an active member of the LRC to a card-carrying one a few years before the Corbyn surge. At the time, I was their national organiser, but I was frustrated by a lack of progress in the drive to make the LRC an organisation with national reach and a decent social media presence. I joined others in building up Red Labour on social media, which ultimately played a pivotal role in getting Corbyn elected as leader.

A lot has happened in the time since, but as Corbyn’s leadership developed, and Momentum took over the branding of the Labour left, that (older) left got left behind, alongside the likes of the Campaign for Labour Party Democracy (CLPD) and Red Labour. As the Corbyn project has hit inevitable road blocks and the alternatives to the LRC have failed to deliver the grassroots democracy we need, I became less convinced that I’d done the right thing. Not because the LRC was or is perfect, but because when you’re building movements, it’s about what you can contribute to the collective that matters – not finding a purist, idealised clique that exists as your comfort zone.

Building a movement, and organising it, is messy. You’ll have arguments; you’ll have to reach compromises. These are the things that building big, effective organisations are about. But there is little choice if you want to create a genuine, open, grassroots organisation capable of both supporting the leadership of the party and pushing it towards the transformational socialism this country needs.

I despair slightly when I read about whole swathes of the party being written off as ‘cranks’ and conspiracy theorists, and a young, ‘core’ group being uncritically lauded as the future of the party. In the meantime, older members are further marginalised because they don’t have the same access to social media or the cliques of power that are developing within the Corbyn project. It’s not accurate and it’s not fair. Above all, it feels like a power play, to put distance between the ‘old’ and ‘new’ left.

I think that’s naïve, damaging and exactly the opposite of what we should be doing, three years into this project. The truth is that we must bridge the generational divide, not prise it open further. To do that, we’ll have to engage with the traditional organisations of the Labour left, understand traditions of democratic participation and principles of collective action.

Nothing bad will come of getting involved with the ‘older’ left, listening to their activists and learning from their experience. At the same time, by engaging, younger activists can educate too, bring energy and improve communications with the world. It’s a two-way street.