DAVID CONNOLLY reflects on the fallout from December’s general election and the unnerving sense of a fast changing and precarious world.

The core statistics of last month’s general election make grim reading. Labour lost 7.9 per cent of its vote from 2017 and relinquished 60 seats. The Conservatives gained 1.3 per cent and won 48. But that’s what happens in a first past the post system, I suppose. 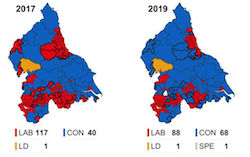 Sadly, in its bastion of County Durham, Labour got 40.4 per cent of the total vote while, scarily, the Conservatives received 39.4. At the same time, in the now iconic seat of Mansfield, there was a swing of 15.5 per cent to the Tories producing a staggering majority of 16,306, albeit in a 70 per cent Leave-voting constituency.

In 2001, Labour won 92 of 265 non-metropolitan constituencies. This time it held only 17 of those seats and 10 of those are home to universities. We should note with concern, therefore, that nearly all the leadership hustings booked to date are in big cities, with Durham City the exception due to timely pressure from the Durham Labour Left network.

What’s more, at some point during this parliamentary term a boundary review will be pushed through, probably costing Labour 20 seats in the metropolitan areas as well.

If only 18-24 year-olds had voted then the whole of England, apart from the Wash, and the whole of Wales, other than a rural area in west Wales, would be red. Conversely, if the franchise was restricted to the over 65s, it would be entirely blue. Scotland and Northern Ireland are different, of course.

Statistics are important but for me one of the defining stories of the election came from the blogger, Dan Evans. Originally from Bridgend he returned there to canvass and kept coming across a woman delivery driver who explained that she worked three zero hours contracts at the same time, to which the Labour canvassers said, “Ah yes, but we have policies to deal with that.”

“I know that but I’m not voting for you, I’m voting for the Tories,” she replied. When asked to explain, she described herself as a “working class entrepreneur”.

All of which suggests we are not just dealing with the fallout from Brexit and hatred of the ‘terrorist supporting’ Corbyn, but also the impact of the long Thatcher revolution on popular attitudes.

The Conservatives now have a big opportunity to consolidate their new-found support but only if they become significantly more interventionist in the economy. This will require some strange ideological twists and they’ve started already. The government’s support for the airline, Flybe, was justified by Angela Leadsom on the grounds that, “The government believes that this company is viable”. They are refusing to publish the details, but since when did any self-respecting free marketeer start believing it is the state’s job to decide if a firm is viable or not? They have spent decades trying to stop this sort of thing.

All of which raises the increasingly discussed question as to whether a new form of Johnsonian ‘One Nation’ Conservatism is emerging, forced by electoral circumstances to bypass previous orthodoxies. We can only wonder about the tensions this will surely cause around the Cabinet table in due course.

Unless the unexpected happens, the Labour leadership contest appears to be a battle between Keir Starmer and Rebecca Long-Bailey, but we should hope the present hustings format is changed to allow all the candidates to make a proper statement and not just pronounce in 40-second soundbites. 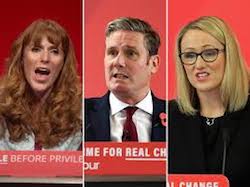 I heard Long-Bailey talk in Manchester a couple of years ago on the future of co-operatives. She was well-informed and a decent speaker but if she wins she’ll be branded as Corbyn mark II, not surprising if you give Jeremy 10 out of 10 for leadership’. (He gets high marks from me for resilience but that’s not quite the same thing). That makes her terribly vulnerable to the kind of relentless personal attack most of the British press specialises in and I’m not sure I’d want to put anybody in that position again.

There’s much to support in Starmer’s statement, “We can win again if we make the moral case for socialism”, although the challenge, as with most leaders, will be holding him to such a commitment when the going gets tough and the pressure is on.

Beyond the election, there is a strong sense that everything is fragile, epitomised by the unprecedented fires in Australia.

The increasing speed of global climate change; the high level of debt in the world financial system; chaotic and dangerous international relations; a welfare state that punishes as much as it helps; the endless struggle of over-worked public services of all types; the continued rise of racism based on an empty nostalgia for Empire; and of course the fractious state of the Labour Party itself, are all a cause of deep concern in themselves. Taken together, it’s an unnerving time.

And then, to cap it all, the poor bloody 93-year-old Queen has a family crisis on her hands. Now, if one of the Labour leadership contenders could solve that problem…

David Connolly is chair of the ILP.

The above statistics were cited by Councillor Simon Hennig, Leader of Durham County Council, in a talk to the Durham Fabian Society on 18 January 2020.

For another article focused on the north east (and featuring an ILPer), see Julian Coman’s ‘If Labour doesn’t talk to the voters it lost, I fear for the future’ in The Guardian.