In the first of a series of despatches from ILPers and friends around the country, SEAN CREIGHTON reports from Croydon where a network of mutual aid groups, willing individuals and the local authority are working hard to support the community.

Croydon in south London has the second largest population of all the London boroughs, the second highest number of known Covid-19 cases, and a high death rate.

The north of the borough and town centre is much more densely populated than the south, with large numbers of flats lacking adequate communal space or balconies that are anything but small.

As yet the socio-economic profile of those who have contracted Covid-19 and those who have died has not been published. But given that the borough’s Black and ethnic minority population is more than 50 per cent, with a much higher rate in the north, the numbers of people affected from BAME communities is likely to be high.

A network of Mutual Aid Groups has been sent up using WhatsApp, plus a helpline phone number for those not on WhatsApp, which has been operational since 14 April so people can be referred to their local MAG. 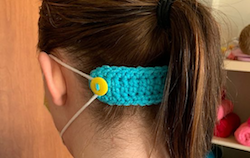 There is also a growing amount of individual and collective support activity, from the Knitting Norbury Together group, which is making mask mates (pictured left); to the Cassandra Learning Centre, delivering cooked meals on Thursdays to elderly and vulnerable people in Croydon, Lambeth and Wandsworth; to Ester Sutton of the Oval Tavern, who’s cooking Sunday lunches for people to collect; to individuals making PPE for NHS and care staff.

Croydon University Hospital is under great strain with about half its beds now occupied by those with Covid-19. Residents are turning out to join in the clap for the NHS staff, but few yet understand that there is an enormous threat to the regional NHS from plans to close services at St Helier and Epsom Hospitals.

Even in normal times this would add to the pressures on CUH and St George’s in Tooting. If the plans are confirmed and there is another pandemic, the pressure on those hospitals could be disastrous.

The council’s response has been amazing, moving with great speed to set up and ensure the continuation of its various help services; acting in partnership with the NHS, the police and the community and voluntary sector; and ensuring that as many services as possible can continue. Street cleaning, refuse collection and fly-tipping are all ongoing, while the authority has avoided closing parks and open spaces.

Also, because the government has not suspended the planning application process, the council has extended its usual period of consultation on the few applications that were already going through the system in mid-March.

Meanwhile, those shops that are able to remain open are doing stirling work: food, household goods and pharmacists – although there have been problems with some people not keeping to the two-metre social distancing rules.

The use of public transport has plummeted. Often just a couple of people can be seen riding the buses that go along my stretch of London Road through Norbury down to West Croydon, or up into Streatham. The sky is much quieter too, with fewer planes going into and out of Gatwick Airport.

The death of Ted Knight (from causes other than Covid-19) came as a shock to members of the Croydon United Retired members branch, of which Ted was a very efficient secretary, and to those involved in the Croydon Assembly, which he chaired. Ted lived in Gypsy Hill over the border in the borough of Lambeth, and he will be much missed by those on the left in the Labour Party there.

Ted was a highly controversial leader of Lambeth council, yet perhaps the most fitting tribute to him has come from the many people who praised him for taking decisions on issues raised by middle and senior ranking officers.

The Lambeth Council Archives has put out an appeal for material about Covid-19 in order to create an archive of the crisis.

You can read Sean Creighton’s regular updates on the Covid-19 crisis on his two websites: History & Social Action News and Events, and Norbury Watch.