In the words of the author himself, Ian Bullock’s latest work of left-wing history is an unusual book in several ways.

First, The Drums of Armageddon covers a very short period – the five months from July to December 1914 following the assassination of Austria’s Archduke Franz Ferdinand in Sarajevo, which sparked the outbreak of World War One. 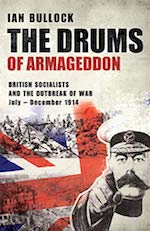 And secondly, it’s drawn almost exclusively from three longest established socialist weeklies that most people on the British left read at the time – the ILP’s Labour Leader, edited by Fenner Brockway, Robert Blatchford’s the Clarion, and Justice, the oldest of the trio and mouthpiece of the British Socialist Party (BSP), which in 1920 would form the majority of the Communist Party.

According to Bullock: “Of the three papers, none welcomed the coming of war but the Clarion quickly saw it as inevitable and the victory of the Allies as necessary, while the ILP’s Labour Leader was equally outspoken in opposing British participation.”

By contrast, Justice, “with reservations – supported the country’s war effort”.

“I try to treat each position as impartially as possible, concentrating on explaining how each paper came to the conclusions, or in the case of Justice the conflicts, that quickly developed,” says Bullock.

Yet there’s a third element of Bullock’s book that also makes it unusual – his focus on the ‘ordinary readers’ of those papers “whose views and activities rarely appear in works of history” – alongside such towering socialist figures as Keir Hardie, Ramsay MacDonald, Arthur Henderson, Beatrice Webb and Ellen Wilkinson, as well as Brockway and Blatchford.

The book begins by looking at concerns about war in the Balkans, at the activities of militant suffragettes, serious strike threats and a near civil war situation in Ireland. And once war was declared, it considers the widening split in socialist ranks.

“Much of the book looks at how divisions on the left were already widening by the end of 1914 in ways that foretold to some extent post-1917 divides,” says Bullock.

“But it also emphasises just how much the left agreed about proper provision for servicemen and their dependents, a generous and non-vindictive peace settlement and – most poignantly of all in the light of recent events – the determination to see a ‘United States of Europe’ following the war.

“The progress of the war itself in these months is not entirely neglected. There are reports from Blatchford and his Clarion partner Alex Thompson on visits to France, and the final chapter includes a harrowing eyewitness account from the Clarion of civilian casualties of the German navy’s attack on Whitby, Scarborough and other towns on the east coast.”

The Drums of Armageddon: British Socialists and the Outbreak of War, July-December 1914  is available from Amazon as a paperback (£7.99) or Kindle edition (£3.99).

A full review of the book will appear on this website in the next few weeks.

Ian Bullock is a Friend of the ILP and author of Sylvia Pankhurst: From Artist to Anti-Fascist (1992), Democratic Ideas and the British Labour Movement, 1880-1914 (1996), Romancing the Revolution: The Myth of Soviet Democracy and the British Left, (2011) and Under Siege: The Independent Labour Party in Interwar Britain (2018).