BARRY WINTER reviews Searching for Socialism by Leo Panitch and Colin Leys, a valuable examination of the left’s ongoing struggle to transform the Labour Party. 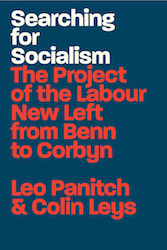 Anyone wishing to understand how the Labour left has struggled to democratise and radicalise the Labour Party, and the ferocious resistance it met from many on the Labour right, should find this book of interest. It is not always an easy read but it is no less important for that.

Both authors have a long and valuable record over several decades of studying left-right battles within the party, which they draw upon extensively. I only wish they had concluded with some lessons for the Labour left on its future role following Jeremy Corbyn’s resignation as party leader. But perhaps that is too much to ask.

As they put it: “This book is intended as a contribution and as a tribute to those who, in wanting the Labour Party to become a genuinely democratic socialist agent of transformation, have done so much to recover the capacity to think ambitiously about social change.”

While I welcome this, I think we should admit that sections of the Labour left have not always conducted themselves properly. There is a streak of self-righteous intolerance among some that undermines the very cause they champion.

That said, there are many whose tolerance and good humour are an example to us all, including the late Tony Benn and the former secretary of the Campaign for Labour Party Democracy, the late Vladimir Derer.

Panitch and Leys have a profound understanding of the difficulties facing the Labour left. They are fully aware of the arguments made by the Marxist scholar, Ralph Miliband (father of David and Ed), who in 1976 wrote that it was a “crippling illusion” to seek to transform the Labour Party into an effective vehicle for socialism.

Rather than capitulate to this view, it is vital that people on the party’s left learn the lessons of the past – not least from their own mistakes – and develop an awareness of the challenges to be overcome in a democratic, honest and wherever possible, fraternal manner.

The rise and fall of Corbyn is particularly relevant in this respect. The authors recognise that the renewal of the left during his leadership of the party “was still inherently fragile due to its unanticipated, almost accidental nature”.

They quote the left activist Ben Sellers’ verdict when he wrote on the LabourList website in 2018: “If you’d asked me five years ago what the plan was, I would have said build locally in CLPs, win policy arguments, organise at conference, get more representative MPs, win the leadership – in that order. I would have talked in terms of a 10-year plan at a minimum.

“Instead, we did it back to front, winning the leadership in an extraordinary summer. None of this gave us time to educate, organise and agitate in the rest of the party and the movement.”

Certainly, Corbyn’s rise to the party leadership was impressive. Taking Leeds as an example, his first public meeting, which I attended, had an audience of 1,000. On the second occasion he came, which I also went to, there were 1,500 people present. On the third, he addressed an audience in the open air estimated to be 3,000. This included a great many students. These are the sort of numbers that Tony Benn attracted when speaking in Leeds several decades ago.

Now we have returned to what looks like a long haul and there is a need to build a movement that is broad-based, tolerant, and willing to learn from its past, as well as understand the new challenges it faces given the nature of British society. It won’t be easy but it is no less necessary for that and studies like this can be of great service in the process, although we don’t have to agree with everything they say.

Searching for Socialism: The Project of the Labour New Left from Benn to Corbyn by Leo Panitch & Colin Leys is pubished by Verso and available here for £10.49.