The UK’s response to Covid-19 has been characterised by government bungling and lack of preparation, says HILARY CAVE. Following years of cuts, privatisation and inequality, the burden has fallen hardest on the old and poor.

Throughout the Covid-19 crisis, government ministers have maintained they are ‘following the science’, as though there is a single scientific opinion. Government relies on the Scientific Advisory Group (SAGE), but journalists’ investigations have revealed that 13 of the 23 known SAGE participants are paid employees of government, including the prime minister’s senior adviser Dominic Cummings. 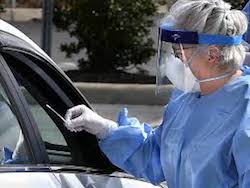 No minutes of these meetings are published and, understandably, there is concern that supposedly objective scientific opinion may be influenced by political considerations. The official SAGE committee comprises 16 men and seven women, with only one ethnic minority person.

Other experts are concerned about SAGE, including Professor Sir David King, a former Chief Scientific Adviser to government, who has set up a panel to act as an independent alternative to SAGE, and Professor Anthony Costello, a former WHO Director, now Professor of Global Health at University College London, who thinks SAGE lacks expertise in public health, primary care and intensive care.

Community testing and contact tracing were apparently not included in the possible strategies the committee considered because not enough tests were available. Public Health England stopped testing on 12 March, apparently because of lack of capacity, surprising public health specialists and going against WHO advice to test, trace and isolate.

Local authority environmental health officers are trained in contact tracing, yet a parallel centralised system, heavily reliant on the private sector, was created. This system seems to be in chaos with contact tracers left waiting for online training or without any contact work to do.

The independent SAGE panel also argued that the government’s revised ‘stay alert’ message was unclear, and predicted that its strategy would result in a more rapid return of local epidemics, causing more deaths and possible further national or partial lockdowns.

Under the Tories, much of the responsibility for public health, health care staff and budgets has been passed from the NHS to local authorities while, at the same time, between 2010 and 2018 those authorities lost 49.1% of their funding in real terms. Meanwhile, Public Health England (PHE) reduced its budget by £500 million over five years in ‘efficiency savings’.

A prime duty of any government is to keep its people safe. During a pandemic this is not always possible, but years of cost-cutting, moves towards smaller government and privatisation, increased fragmentation in the health service, and recent government bungling, have vastly increased the number of deaths.

Just think how useful community hospitals would have been in the current situation, had there not been determined action in recent years to close them down. Some community hospitals, such as Bolsover, owned by Derbyshire Community Health Service, were sold off with their land at a time when draconian measures were being taken by the clinical commissioning group (CCG) to reduce expenditure.

The Bolsover site was sold to Homes England for house-building, following strenuous efforts by the government to ‘encourage’ such sales so that houses subsequently built on former NHS sites would contribute to national government house-building targets. 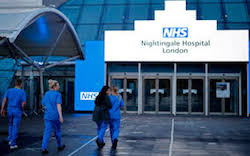 In April great acclaim accompanied the rapid building of the ‘Nightingale’ hospitals in east London and elsewhere around the UK. But the London Nightingale has taken only 54 patients, according to the Guardian, the Mail Online and the Telegraph, all of which mentioned shortage of nursing staff as a significant factor.

What’s more, the first patient to leave the London Nightingale was applauded on his way by staff, under orders from managers, despite still being so ill he was merely being transferred to another hospital.

Now the Nightingales are being mothballed, presumably support workers such as cleaners, supplied by private companies and hailed as heroes by government ministers, will lose their jobs.

At the same time, rather than nationalise private hospitals, which were facing lean times because of restrictions on overseas travel and fewer elective operations, the government commissioned 8,000 private beds at an estimated £300 per bed per day. In an agreement reached in March, 20,000 nurses and 700 doctors were taken over to the NHS ‘at cost’ for at least 14 weeks.

NHS campaigners shouldn’t despair, though, for private providers have made some sacrifices. The chief executive of Spire Healthcare, for example, took a 20% cut to his usual annual £1m salary for three months. There have been limits on shareholders’ dividends, too, but only for the duration of the deal. No wonder this private sector rescue package caused the price of Spire shares to surge on the London Stock Exchange.

Other concerns about privatisation are international in scope. The Chancellor, Rishi Sunak, announced that £13.4 billion of historic NHS debt will be wiped out, which sounds reassuring until we place it in the context of current trade talks with the United States.

Although Boris Johnson promised the NHS would not be on the table at these talks, two factors give cause for concern. First, the government’s Trade Bill, which is now in the House of Commons, does not protect the NHS despite a national online petition calling for NHS protection from trade deals.

Secondly, the US wants to secure an agreement that will force us to pay as high a price for their drugs as Americans themselves pay. This will cost the NHS a great deal more.

The US documents appear to state that there will be court jurisdiction over foreign state-owned enterprises that interfere commercially with the interests of American corporations. Could Johnson be freeing the NHS of debt to tempt US private companies into taking over some of its services?

The NHS should not be viewed in isolation from social and nursing care, which is now delivered by a patchwork of providers dominated by the private sector. The crisis in social care has remained unaddressed for many years, despite promises from a string of prime ministers. 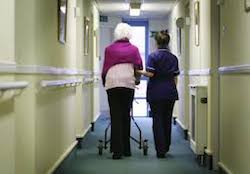 Many private care homes are part of large chains owned by private equity funds that exist solely to produce profit. They remove money from care homes, often taking ownership of the buildings and charging high rents, thus saddling the homes with large debts.

Government funding cuts mean less and less public money, in real terms, is paid by local authorities for care costs, a process that sank the Southern Cross chain of homes a few years ago and appears to be putting the Four Seasons chain in similar danger, so threatening disruption, and possibly early death, on many confused, frail elderly residents.

Dan Poulter, a Tory ex-minister of health who is also a practising NHS psychiatrist, has recently argued that health and social care should be integrated through a single commissioning model, with social care, like health, free at the point of need.

Many NHS campaigners might prefer to jettison that commissioning model altogether, with its private firms and overload of NHS accountants and managers, and revert instead to a simpler structure of publicly-owned and controlled direct health provision. Still, Poulter’s call is one indicator of the pressure for change that might beset our government in the near future.

Public anger has been growing throughout the coronavirus crisis as we become increasingly aware of the lack of government action or concern for the social and residential care sector.

For example, there have been numerous tales from care home managers about patients known or suspected of having coronavirus being discharged from hospital into homes. One care home manager even claimed that the financial survival of the sector is under severe threat as the death of so many residents has reduced income.

Indeed, one third of all Covid-19 deaths have occurred in care homes, among both residents and care workers who, like NHS workers have been starved of protective equipment.

According to the Office for National Statistics (ONS), social care workers have had significantly higher rates of Covid-19 deaths than the general population – 23.4 male deaths and 9.6 female deaths per 100,000 – whereas healthcare workers have not had a higher death rate.

Carers and care home residents are not the only groups disproportionately affected by the virus, of course. Health care staff from black and minority ethnic (BAME) groups have died in dramatically disproportionate numbers, a fact that needs objective investigation.

The causes are probably much more complex than straightforward racism, but it is still shocking that the government’s recent ‘descriptive review’ of these higher death rates among BAME groups contains no proposals for action. Then again, given the attitude displayed by our prime minister in past newspaper articles – his infamous comment about “piccaninnies with water-melon smiles”, among others – perhaps we shouldn’t be so surprised.

Similarly, many people have been shocked by the dramatic disparities in Covid-19 death rates in different areas, with people in the poorest districts dying at twice the rate of those in affluent areas. While deplorable, this is exactly in line with facts well known for years: that the inequalities in our society are literally deadly.

Under the last Labour government, the NHS was required to tackle health inequalities. But today, while Public Health England espouses this aim, so many Conservative government policies – such as frozen benefits and the bedroom tax – have the opposite effect, increasing inequality.

There has been a great deal of research, and a variety of models which show the many factors that determine health – housing and the built environment, clean air and water, good food rather than hunger, social or family networks, and so on. And we now know that higher levels of air pollution appear to be linked to higher rates of death from Covid-19.

Poverty rather than personal behaviour is the factor that most closely determines the health of the population. We already know that people living in poorer areas have many fewer years of good health, and tend to die much younger, so the more lethal Covid-19 death toll in poor areas is absolutely in line with what has been going on for a long time.

When a government slashes benefits, reduces immigrants and low-paid workers to homelessness and destitution, enables zero-hours contracts and other abuses of human rights, then this is the result.

Perhaps, now these terrible inequalities have been highlighted by the coronavirus crisis, we may begin to confront their causes, and step-up our campaign for a fairer, more equal society.

Hilary Cave is a member of the Chesterfield Save Our NHS campaign, part of the Derbyshire Save Our NHS network and linked to Health Campaigns Together.

This article is the second part of an edited and shortened version of a piece that originally appeared on ‘Three Score Years and Ten’, the blogsite of former Labour MP Harry Barnes.

You can read the first part – ‘Coronavirus: Austerity, Crisis and the NHS’ – here.