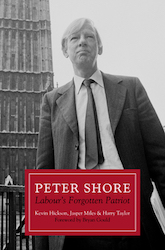 I remember Peter Shore as a Cabinet minister in the Labour governments of the 1960s and 1970s. He was a leading voice in the campaign to ‘Get Britain Out’ of what we used to call The Common Market.

This is the first biography ever been written about Shore and reminded me I knew hardly anything about him. It’s subtitle is appropriate.

In 1975 I was active in the referendum campaign to ‘Get Britain Out’ and saw Shore as one of a group of what we would now call ‘Brexiteers’, with Michael Foot, Tony Benn and Barbara Castle.

Of course, this book deals with all the issues around British independence and Europe, but much more. Shore could not be identified as either left or right within the Labour Party but he believed in wealth redistribution and his economics were Keynesian.

The book covers the economic debates around the Cabinet table between 1976 and ’79; his two leadership contests in 1980 and ’83; the sustained attempts by his Constituency Labour Party to deselect him; and his periods on the back benches and in the House of Lords.

Shore could not be easily pigeon-holed. His loyalty to the Labour Party was absolute, but he was a critic of the ‘New Labour’ project. He had a rigorous and independent intellect and his views are well covered in the book.